Since i've started telling people about my upcoming move to Glasgow, i've noticed a trend in peoples' reaction.

And it's annoying the shit out of me.

After telling people that i'm moving, some have taken to asking, "why?!" - which is a fair question. The next question is usually, "how?" - and i begin explaining about the wonderful world of UK Ancestry (basically, if you have a Grandparent from the UK and live in the commonwealth, you can apply for a UK Ancestry Visa that allows you to live and work in the UK for 4 years). i pontificate aloud as to how long i plan on staying (no idea), and tell people that after 3 years, you can apply to become a permanent resident. After a year of residency, you can then apply to become a citizen (which is, yes, something i've thought about).

Anyway, some people have replied to my long-winded answer by stating, "or you could just marry a Scottish lad!!"

WHICH MAKES ME WANT TO RIP MY HAIR OUT AND SCREAM IN THEIR FACE AND KICK DIRT AT THEIR SHINS!

Now, i'm not a politically correct tyrant or anything, but it fucking annoys me because people just assume that:

(b) i believe in marriage and obviously, if i were to get married, i would marry for the sheer convenience of it.

i know that people mean no harm by their replies but i fucking swear: if one more person points out that i could just marry away all my visa problems, i might just go all Frances Farmer on their ass!

Well, this is it: i just purchased my one-way ticket to Glasgow, on the new airline Zoom. i've never flown with them before but surely they can't be any worse than Air Transat, can they?

i've also moved from a perpetual sense of anxiety to absolute hysterical nirvana - if such a thing exists. i can't believe that in little over a month, i will be on an overnight flight to my NEW home; a new country; a new city. Which got me thinking, i've moved around. A lot. The longest i ever lived in one place was seven years from the ages of 7-14. That may seem like a longtime to some but the majority of my friends have a "childhood" home which their parents still live in.

When i think of "childhood" homes, i think of three: the one on Barrett Boulevard in Napanee; the one on the outskirts of Kingston; and finally, the one in Belleville.

i'm not saying there was anything wrong with being moved around a lot as a child - in fact, i don't remember feeling too sad about it. Well, except when i was 5 and had to leave behind my best friend, Jasmine, in Napanee.

i'm saying that i'm a restless creature who likes adventure.

Posted by Jennifer at 8:16 PM No comments: 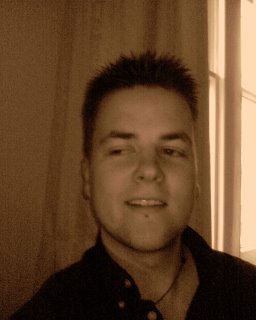 This is my friend, Mark, who hails from Fraserburgh, Scotland. Mark currently, however, lives in Southern England, where he enjoys working as an astrophysicist (i think) and entertaining the locals with his thick northen accent.

i first met Mark while studying at Glasgow University and sharing the same self-catering residencies on the prestigious Park Terrace. As such, boys and girls were relegated to their own floors and shared communal kitchens. Although i lived on the second floor, i would often hang out and eat my meals in the basement - in the boys' kitchen.

Why? Well, that's where all the fun was. In the basement kitchen, you would often find the lone Irish (read: Catholic) student posting pictures of the Pope while the majority Scottish students (read: Protestant), threw food at it. In the basement kitchen, you were often subjected to bizarre food challenges (an example, how much whole milk can Mark drink in one sitting? Answer: a lot).

Mark could often be seen wandering the halls in a bathrobe with his trusty whole milk carton in hand. When he wasn't wandering about, he could be found playing his guitar in his room. Before entering his room, you were notified by a posting on his door, of a list of words that people were NOT ALLOWED to speak in his presence. One such word was, "egg". Mark hated the sound of the word and thusly prohibited anyone to say it in his room.

i got to know Mark pretty well as he briefly "dated" my American roommate, Ann. Mark would often come up to our room and hang out. i had brought over some cds from Canada, that Mark would borrow - Miles Davis, John Coltrane, Herbie Hancock, and Ornette Coleman. Mark liked jazz, i figured.

Meanwhile, Mark had retreated to his room and over the year became an accomplished jazz musician. i don't mean some amateur strummer either; i mean Mark became a fucking performer. It wasn't long afterwards that Mark was often playing with jazz groups around Glasgow.

Mark is one of the most strange but unbelievablely funny people i know. Whether it's his strange Fraserburgh sayings ("Fit?" meaning, "What?") or his random humour, the dude SLAYS me.

Posted by Jennifer at 7:59 PM No comments: Kelvingrove Art Museum. Again
Originally uploaded by Jenny Knoxville.
i am officially starting to get nervous now. i've begun questioning as to whether or not i will have sufficient funds for relocating and setting myself up in Scotland. Obviously i will and of course i will have to be frugal until i get a job but nevertheless, i'm still scared.

However, no one should panic (i.e. MOTHER), because i will be absolutely fine. You know, if i had never lived in Glasgow before, i would be absolutely terrified but i have the advantage of being familiar with the city. Also, i have my old NHS card (the UK version of OHIP) although i'm not too certain if i'm still covered. i suppose i should find out. Also, i remember the GP that i was set up with, as being quite old so for all i know he could have died by now.

Nevertheless, i've already started looking at apartments (flats) online (www.citylets.co.uk), and i am so excited by the prospect of living in a traditional tenenment in the west end (hopefully, anyway). Yes, those drafty old flats beckon me from my cozy, warm, and dry comforts of modern living.
Posted by Jennifer at 4:49 PM No comments:

One of the things i miss most about Glasgow (and the UK, in general) is the junk food. Don't get me wrong: i also appreciate the fine landscapes, history, plethora of tea, pub rituals, and culture. However, it's the sweets and chocolates of the land that i often reminisce about.

Tunnock's Tea Cakes, Jelly Tots, Irn Bru, and the best Indian food i have ever eaten in my life; all are gifts from the Gods who took pity on the wet and moist lands of Scotland.

Is it any wonder that i gained 10 pounds while studying on exchange in Glasgow. It was so worth it though.

However, when it comes to top cuisine and the availability of such, Toronto wins. Hands down. Of course i'm going to miss my family and friends, but there is a place inside me that is going to miss the food of Toronto even more.
Posted by Jennifer at 7:32 PM 4 comments: My old neighbourhood
Originally uploaded by Jenny Knoxville.
i still have about seven weeks until my date of departure for greener pastures, but already i am having trouble sleeping; mainly due to anxiety and excitement. It seems like i still have so much to do: get an international driving permit, taxes, move my stuff into storage, and do all the things i always meant to while living in Toronto. All those activities that you take for granted when living in Toronto, like getting drunk out of your mind at The Matador (ok, i have done that) or getting dressed in your best pleather and hitting up The Vatican. You know, all those essential Toronto experiences.

Toronto, you ol' gal, you've been kind to me but the truth is, there was someone before you. Someone i haven't been able to shake since running into your cushiony metropolis five years ago. Yes, it's true: i had a love before you and i swore that i would return to her green landscapes and curry take-aways. i've never forgotten Glasgow, and it's time that i stayed true to my word.

So, Toronto, i will always love you and you'll always be my second home and i will defend you to my death. For now, however, i have to further explore this perverse love i have for Glasgow. Some may say it's undeserved, but those motherfuckers have never strolled down Great Western Road, past BBC Scotland and used book stores on a lazy sunday. And that Toronto, is pure dead brilliant.
Posted by Jennifer at 8:46 PM 3 comments: 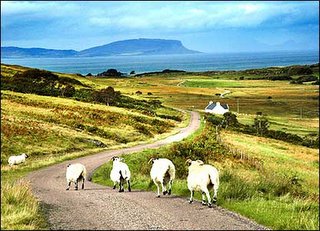 I've got my UK Ancestry Visa and a healthy dose of optimism. I've given my two month rental notice and bid farewell to the local drunks of Parkdale, my home for the last five years.