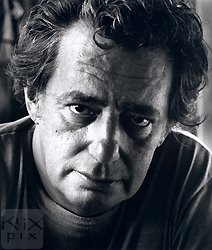 Dear Mordecai Richler, why did i resist you?

i think it may have been due to being forced to read The Apprenticeship of Duddy Kravitz in highschool; i resisted a lot of things back then because there was little else to do in Napanee at the time. Or maybe it was because your protagonist sweat a lot and ran around as if he were on a serious kick of methamphetamines. Nevertheless, i never really read a lot of your stuff until quite recently. i read the odd article you published in Canadian magazines and newspapers and had distant respect for you out of the sheer fact that you were a grumpy Canadian (my favourite kind).

Recently, however, i read your 1998 novel, Barney's Version, and was struck in total awe. It's a shame your dead now and will no longer be publishing anything further. No wonder people have published your miscellaneous works since your unfortunate and untimely passing; you're awesome!

It was with sheer utter glee that i opened my birthday gifts from my Mother and Step-Father this morning as they had sent me Solomon Gursky Was Here and St. Urbain's Horseman. i've been on a Richler kick recently and have also read your daughter's latest novel, Feed My Dear Dogs (by Emma, respectively). It was quite good, actually. Tragic, really. i think i may have cried at the end of it.

Speaking of your offspring, i was once at a birthday party in Toronto, in which one of your sons, Noah Richler, was also present. i think we sat on the same couch. He didn't say much - then again, he was writing for the National Post at the time. i used to be a big fan of Daniel's show on CBC, Big Life - what ever happened to that show? It was great.

Anyway, dear Mordecai, it's a shame you've passed on now and i will have to carefully spread out your writings in due course, now that you are no longer with us. Your published works are catalogued treasures that i eagerly look forward to being enveloped in.