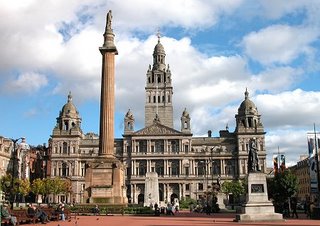 Since my arrival to this fine city - almost three months ago - i haven't been too busy until recently.

The new job is quite busy just now but i like it. The people are so nice and the days fly by because i'm too busy to notice otherwise.

As well, my friend from Canada, Sara, arrived on Thursday and left this morning. G-d bless her wee little soul because she brought me Tim Hortons coffee! Sara managed to have a proper night out - Glasgow style - wherein she drank so much alcohol to the point where she passed out on the toilet with her pants around her ankles (sorry for the revelation, Sara). When in Rome, as they say...

It was great having Sara here as it subsided my homesickness a bit. i have to admit, i am feeling less and less homesick as the weeks roll by. Of course, i still really miss my friends and no doubt, closer to the end of my contract, i will be getting anxious about what to do. i am not looking forward to finding another job - especially one that i like doing.

My cds FINALLY arrived - two months after my Mum mailed them to me - and i'm excited to actually have some music again. You can only rock out to Broken Social Scene for so long...
Posted by Jennifer at 4:54 PM 1 comment:

Only an English person (or perhaps, American) could write such an article, Shirty Scots' Hatred is Such a Waste.

i mean, really - all it does is perpetuate the notion that loads of English and American folk are a bunch of arrogant wankers.
Posted by Jennifer at 4:49 PM No comments: 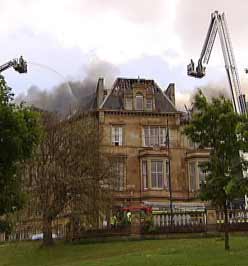 i once lived at 18 Park Terrace for 8 months way back in 1999-2000. Those 8 months were punctuated with a precarious balance between serious studying and serious binge drinking. i was an exchange student from Canada, my very first time outside North America, and on a mission to impress the locals.

18 Park Terrace was a beautiful building and i guess Glasgow University thought so too and sold it a few years back. Apparently they were to be turned into some posh townhouses or something. Weird because i remember it being industrial and smelly with student body odours.

One week ago, after work, i was walking to a pub to meet a friend for a drink. The entire west end was stinking from smoke and i asked my friend what was burning.

18 Park Terrace was the reply.

R.I.P. 18 Park Terrace - a colourful moment from my drunk and youthful education.
Posted by Jennifer at 4:27 PM No comments:

i'm liking the new job. The people are friendly and i'm learning a lot about opera. The first week has been very busy but i'm enjoying the work nevertheless. Now if i can only make some time to head over to Edinburgh to actually see some opera!

Otherwise, i haven't been too busy. i've been going out with friends here and there, for a quick pint, and trying - with little success - to save money until my friend from Canada, Sara, arrives next week. i want to hit the town properly when she comes and show her a real Glasgow night out. If she's up to it, of course.

In other news, i am so fucking sick of hearing about the World Cup. It's rather quite annoying how the media is so saturated with shit about the World Cup - assuming that every breathing body in Britain actually cares. Tell you what: i could care less. Every Scot, however, is NOT supporting England. It's quite endearing to be honest; take every Canadian (apart from the 4 million who live in the GTA), and double their annoyance towards Toronto and Torontonians in general and then times that by about 100. Add in some lacerating humour and aggressively friendly attitudes and you have the Scottish mantra towards England and the English in general.

All in all, this week has been good. i feel better about my mid-twenties crisis and Glasgow, in general. There are a few points which have been annoying me, however:

1. The crap American reruns on UK TV: It was awful the first time around, 15 years ago, but now it's just a disgrace to see it again on PRIMETIME TV in the UK!

2. Films opening about 3-4 months after the North American release: Anyone who knows me (or thinks they know me), know that i am a huge film buff. i love all kinds of movies and art house films. So, sometimes i find myself wondering why i moved to the UK where films open way later than they do in Toronto and from a place that has loads of venues to show such films that i am interested in. For example, did you know that the Uma Thurman film, PRIME, opened here about 3 weeks ago?! YES, that very same film that came out on DVD about 3 MONTHS AGO IN CANADA?!! Hard Candy, starring Canadian, Ellen Page, opens tomorrow and i'm kinda interested in seeing it - even though it came out weeks ago in Canada, so i know what happens already.
(ii)Which reminds me: if i read one more review or hear one more male comment about the "brutal and senseless" castration scene and HOW DARE THE FILMMAKER DO SUCH A THING?!, i might just lose my mind. Well, guess what, asshole? Now you know what it's like to live in a misogynistic/woman-fearing/ idolizing culture where ever other film has some naked bitch having her tits blown off her. Seriously. There are 5 American Psycho's for every 1 Hard Candy.

3. Tabloid papers: You know how the majority of people are secretly ashamed of buying InTouch or National Enquirer in Canada (well, Toronto, at least)? Well, such rags are considered "news" here. People go mad over here for that shit. And folks over here are seriously into their "celebrity news". So weird.
(ii)In regards to news: what's up with my beloved left-leaning news outlets - i.e. The Guardian and the BBC - taking on a somewhat anti-Israel stance lately?! For example, i'll just be reading a story about the never-ending bullshit in the Middle East...or something...and come across some loaded term like, "the unjust occupation". HUH?!

4. Grace on Big Brother: OHMIGAWD. Dear child, i almost feel sorry for you because i know what it was like to be 19 and really insecure. ALMOST. 'Cause, damn, you're one snotty, shit-talking, back-stabbing young lady!

5. Junk food: so bad it's good. And hard to resist. Go away, Scottish tablet! You make my teeth hurt and my clothes tight from all your sugary goodness!
Posted by Jennifer at 8:56 PM No comments:

So, i got a new job and start on Monday.

It's a three month contract at the Scottish Opera and i'm looking forward to it as it is within the fine arts and cultural sector and to be quite honest, i feel more at ease working in such environments. Although three months isn't a long time, i think that if i am still feeling as homesick as i am just now, i might come home.

i have been trying to distract myself from feeling homesick but it only seems amplified by actions. For example, Monday night i went out to dinner at what is hailed as the "best Greek restaurant in Glasgow". If it's the best Greek in town, then it is truely a sad state of affairs. As other patrons happily munched away on their wilted and bland food, i longed for the fresh dishes prepared with pride on Toronto's Danforth.

i've come to conclude that Glaswegians just don't know any better and that British food standards are not on par with Torontonians. Either that or i'm a food snob. But how can i be a food snob when you just assume that Calamari comes with Tzatziki?! That's just logic. i mean, what Greek restaurant serves greasy Calamari without Tzatziki?! And since when is Saganaki served in tomato sauce?! Such horrors are just another day at Glasgow's finest.
Posted by Jennifer at 12:52 PM 2 comments:

It seems that every other day someone somewhere in the UK is getting stabbed. Particularily in Glasgow. In fact, Glasgow is the leading city in Western Europe when it comes to murders - and yes, that is including Paris and London.

If it's not some underage teenager on a drunken rampage due to Buckfast, then it's some latest Terrorist threat. Mind you, i don't feel concern for my safety when it comes to terrorism; i'm more concerned about the group of neds drinking outside the Off License shop down the street from my flat.

Although i lived in Parkdale, Toronto for many years and i saw my share of sketchy people, i never felt as concerned for my safety as i do in some parts of Glasgow. Toronto may have dodgy people but for the most part, they are only a harm to themselves. In Glasgow, and i am not certain as to why, but the majority of dodgy people want to do harm to others. It's not a complete night out until everyone gets drunk and/or stoned and someone gets the shit beat out of them.

Why are Glaswegians so destructive? Not only to themselves but to others?

It appears to me, an outsider, that they have little respect for themselves and others but how did they get this way? And why is it so rampant? i'm not saying that poverty and anti-social behaviour necessarily go hand-in-hand but why are so many individuals who live under a certain profit margin so quick to down some bucky and go fucking nuts?
Posted by Jennifer at 3:08 PM 1 comment:

If there is one thing i love about Glasgow, it's how serious weegies take their sweets. There may not be a lot of sun and dental hygiene in this city, but there is always a plethora of sugary goods to keep you docile and distracted.

There was an interesting article in last week's Observer about the history of sugar and shitty health in Glasgow, worth reading.

Scottish children have the worst teeth in Britain. Over the last 20 years, their sugar intake has doubled. One in three of its 12-year-olds is now overweight. But can the blame really be laid at the door of sugary sweets? Award-winning writer Alex Renton on a tale of poverty and decay
Posted by Jennifer at 1:02 PM 2 comments: