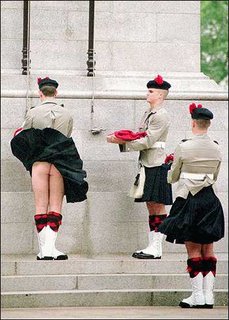 I'm starting to get fed up with Scottish lads - mainly because i haven't been successful at meeting any that i would fancy going out with. And the ones that i have met, that i did fancy and tried to chat up, scurried away from me with a look of terror and/or horror splashed across their mugs.

i asked a friend as to why this was and she gave me two very insightful answers:

1. Assume that British boys (the nice, well-brought up ones), are afraid of women and act accordingly.

2. British boys are afraid of women.


After i relayed my "chatting up" techniques - which, mind you, always worked in Toronto - my friend looked at me in the familiar gaze of horror and shock. I'm convinced that British people think i am some North American barbarian; unable to navigate the subtle social realms of this country. Admittedly, it is quite an exercise to recognise the subtle social behaviours that are recognisable to those that grew up within the culture. BUT i did not.

Anyway, my friend told me that although it was great that i am confident (or, at least, appear so) it can put off some men.

"No, no, no. Your techniques are like clomping boots; you need to be more like ballet slippers: subtle, soft, and open", she replied.

But you know what, it's not like i walk up to men and say, "FANCY A SHAG?!" I'm just myself and to be honest, i didn't think that i came across as being "bold" or "blunt". i would just walk up to some cute boy and start talking to him. THAT apparently is too much for the boys here who are afraid of women. APPARENTLY i am supposed to make myself available to him by making eyes with him and allow him to come to me. Get it?

What a load of bollocks.

Give me some outgoing, hard-working and confident Torontonian over some insecure, sniffling, upper-middle-class mamma's boy any day!

That's how i feel today, anyway.
Posted by Jennifer at 2:21 PM

Man, I didn't realize I grew up a british boy. That freaks me out. I think I've gotten over it though... I hope...

maybe it's the water? lol

Oh hell, learn the art of seduction. I had to!

Jen , dont ever lose yourself to this culture .

Hell if I wasnt disabled id date you , just so you could say had dated scottish guy - though Im prob not your type any way - hehe

Any way , dont beat yourself up Scottish womeen are even worse !!

I could go to south america , brazil meeta a nice girl who would put any of the hussies over here to shame , but the woman here are mostly only interested in dick size.

Looks , culture, intelligence , humour dont matter , just dick so be thankful your not a candian guy trying to measure up to that , because accorrding to some of these gals their min is mere 12 " ..

Get out of this godfrosaken land while you still can !!!!

I can seduce people , you just need gimmick , and to learn how to read people ( esp their energy )

In that sense you really have to change yourself to reflect what it is you hope to find in someoen else i.e. new interests or alternatively internet dating clubs i guess.

oh and tbh a lot of the guys here are not very attractive at all, meaing that avearage to you would be prob be georgeous here i.e. the very ones who can afford to be akward , funny .

Oh my god I just saw this post I can completely relate to you. I met a Scottish boy this past summer (I am Canadian, like you) and it has been A HOPELESS MESS. AHHHHHH just talk to me you bafooon