This past week i have been shadowing a journalist from a TV Network in order to gain "work experience" as it is referred to in the UK. In Canada, it's known as being a sucker and working for free.

As such, i have been able to experience some interesting things these past few days. One of the highlights was attending a press conference at Murray Park for the Glasgow Rangers. Now, i'm not much of a soccer fan (or "football" if you're an uptight wanker), but after watching the young and fit players stretch and kick about a ball, i was well on my way to becoming a fan. Previous to being lead into the Holy Temple of Murray Park, i wouldn't know a Rangers player from any other ned off the street.

For most Canadians, we live a cushiony existence ignorant of violent sectarianism. In Scotland, it's a past time.

Basically there are two major soccer teams in Glasgow: Rangers and Celtic. If you're Protestant you support Rangers; if you're Catholic you support Celtic. i'm sure that there is a historical and well-reasoned arguement for this but any offers of such are still retarded. Why? Because if you happen to support the "wrong" team in the wrong place at the wrong time, you might just get the shit kicked out of you or worse, you could be killed. Some people say that times have changed but up until 1986, if you were Catholic, you could NOT be hired by the Rangers.

Being neither Protestant or Catholic, i say, go ahead; kill each other. Darwinism at its basic.
Posted by Jennifer at 3:40 PM No comments: 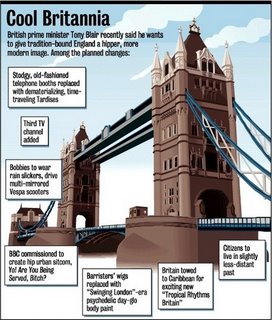 We need to dispel of a myth: just because something is ancient (i.e. the UK) does not make it innately "cool".

Lots of indie kids i know in Toronto, tend to think of the UK as being hip - particularly hipper than Canada. Why is that?

In his famous essay, The Work of Art in the Age of Mechnical Reproduction, Walter Benjamin noted that in an age of mass reproduction and accessibility, relics of the past are seen to have an aura - most often an aura of uniqueness.

However, the UK is no longer a land of English roses, afternoon tea, and tartan-clad men; the UK, like most of the Western world, mass consumes exported American culture and regurgitates such influences. No longer do you have British gentlemen awkwardly opening doors for you but cheeky young boys heavily influenced by American black culture. It's a bizarre mixture of East and West coast America mixed in with middle-class British angst.

Sure, some people still swath themselves in the Union Jack for The Last Night of the Proms and dab their eyes when they play British anthems but for the most part, the UK is no longer the Empire of Cool like it used to be in the 1990s. And to be honest, it's quite annoying when people wax poetic about how "brilliant" and "cool" Britain is; of course, such poetic ramblings never come from actual British people - it's usually North Americans who make such statements. Brits tend not to boast about cool.

Listen, i'm not complaining. i love the UK. i love Scotland. Like most whities, my Grandmother is Welsh/British and fiercely proud. i just get frustrated when told by those who do not live here to suck it up because i'm living in the epicentre of cool. Yes, Scotland is cool but i'll be damned if i can find a decent coffee shop (not including Starbucks).

i'm not sure who currently holds the title to being the Empire of Cool but you know, Canada ain't too bad.