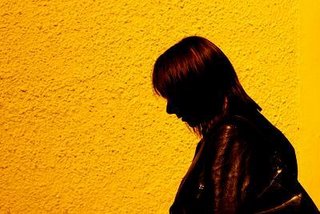 Although this past weekend was somewhat shitty, I did manage to get out and see Red Road, which opened on Friday.

The film was good although the ending was a bit of a stretch. Nevertheless, I quite enjoyed the film - despite its bleakness. Why is it that a lot of Scottish films are so utterly depressing and portray Glasgow to be such a sad and desperate place?

My English friend, Anna (who recently moved to Glasgow as well), is tired of us both whining about the lack of Scottish/British men that we fancy and/or that fancy us. As such, she has signed us up to an on-line dating website. To be honest, I'm a bit reluctant and can't be that bothered to write about why someone should "pick" me or get to know me. I mean, I'm neurotic enough as it is; now I have to post my mug all over the internet and try to convince someone to ask me out? Whatever happened to the organic process of being chatted up at a bar or grocery store? Or meeting dudes through friends and friends of friends?! I suppose you can buy a car off eBay now so why not find a girlfriend on-line too?
Posted by Jennifer at 12:35 PM