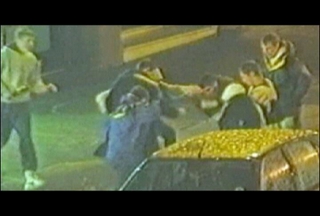 Last month, after CBC aired a documentary called, "The Feral Boys of Scotland", the early morning risers of Canada learned the "dark secret" of Glasgow - namely that it is a violent, bleak, and mental place to live. The programme even went so far as to compare Glasgow with Iraq and Afghanistan - or so i read in the Observer.

The folks behind Glasgow's bid for the 2014 Commonwealth games aren't as entertained by the CBC's claims as i was though. They are claiming that the documentary was made to smear Glasgow's image so that a rival city for the Commonwealth Games of 2014 - namely, Halifax - would take the lead in hosting the events.

The Observer Scotland - not one to take things lightly - fought back in an article published last weekend stating:

Despite Canada's portrayal of Glasgow as a city in the grip of a crime epidemic, it also emerged that Halifax is suffering an unprecedented crime wave. The Observer has seen a report from Statistics Canada which revealed that Halifax is the violent crime capital of the country. A study of 24,000 people, published last year, showed that the city experienced 229 violent incidents, including robbery, sexual or physical assault, per 1,000 of the population.

According to local newspaper reports, additional police officers were drafted into the city last month following an escalation in the number of shootings.

The Canadian documentary followed comments made earlier this year by the chief executive of the Halifax bid team claiming that international bodies would be reluctant to award another major sporting event to the UK so soon after London's successful Olympics bid.

However, insiders said the Canadians were desperate to deflect attention from their own problems, and 'muddy the waters for Glasgow's bid'.