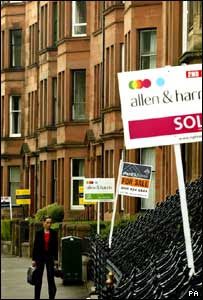 Jesus. It makes me nostalgic for Toronto, where everyone rents until they're 40!
Posted by Jennifer at 12:13 PM

Woe! I'm surprised, actually, that they think they're going to sell. The flat we just moved into was on the market for several months and didn't sell, even though they were trying to sell it at £10,000 under what they'd originally purchased it for, four years ago. The market just isn't moving here, because people are doing more contingent selling - where they purchase their new home only contingent upon selling the home they're living in - so there's the odd situation of lots of houses being up for sale & offers being made at reasonable rates, but of nothing really moving.

It's a bad situation, really, despite that the prices are up. The volume of sales is down, which is what counts. So, unless they can get a first-time buyer in there, it's not going to happen - and what first-time buyer would go for that, when all the indicators suggest that the housing market is beginning a slump, anticipated to bottom out in about 3 years. It's much smarter to rent until the prices stop declining.

pretend I didn't forget the question mark at the end of the second-to-last sentence. 'kay? 'kay.

And yeah, I hope it doesn;t sell and am confused as to why he suddenly wants to sell now?!

When our lease was running out last month, my landlord said he needed to "discuss something with us." I was sure he was going to say he was selling the flat, but instead he told us he was increasing the rent. Only by 25 pounds, but still.

So, basically, I'm paying more to live in a flat that is about half as nice as when I moved in two and half years ago (when everything was nice and new and not falling apart.)

Do they have rent to own in the UK? So you can pay a bit more rent that goes towards the downpayment? Is it even possbile?

If they did have rent to own, would you want to own it?

Why has it gone downhill?