ALLAN MCSHAGGER: YOUR REVOLUTION WILL NOT HAPPEN BETWEEN THESE THIGHS 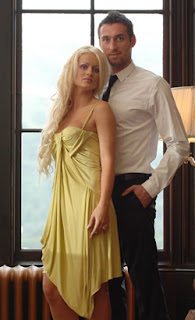 The first time I ever heard about Allan McGregor, the goal keeper for Rangers Football Club, was last February when Paul and I were in Arran for the weekend. There's not a lot to do in Arran when it's raining, so I was sitting around reading trashy tabloids (i.e. The Sunday Mail). Initially, I wasn't at all interested in reading about the after hours activities of some overpaid pituitary case who stands in a net for a living. What piqued my interest, however, was only a minor detail in this story.

Allan McGregor has (had, rather) a Canadian girlfriend?! And even more shocking? She had heard of Allan McGregor? Or maybe she hadn't - who knows? I had never heard of him until I read about all his escapades in the Sunday Mail.

You see, I am always interested in finding out why other Canadians live in Glasgow. What brought them here? What made them stay? I'm curious as to what makes fellow Canadians move from a glorious country with four distinct seasons to Glasgow.

Anyway, after that rainy weekend in Arran, it seems that every Sunday Mail since then, features a story about Allan McGregor. At this rate, I think it's safe to assume he has shagged half the women in Glasgow.

My boyfriend, a die-hard Celtic fan, mocks me for reading about Allan McGregor's trashy exploits in the equally trashy Sunday Mail but honestly? It's so trashy, it's good. Take this most recent (and cringe worthy) article. It's almost like something out of a John Waters film!

Another reason why I'm so drawn to these tacky tabloid stories is because as a Canadian and hockey fan, you rarely hear about multimillion dollar hockey players and their exploits off the ice. Apart from that whole Tie Domi and Belinda Stronach fiasco, it seems that the Canadian media rarely report on such affairs. I'm not sure if that's because there's little demand for such stories or if the papers have some unspoken rule or if hockey players are just boring and married to their high school sweethearts (a la Curtis Joseph).

Perhaps all these trashtastic stories in the paper has something to do with British media glamorising WAGS (for all your Canadians, that means "wives and girlfriends" of soccer players), thereby lending credit to this phenomenon as a legitimate aspiration in a girls life. It's a sad state of affairs when six out of ten women want to be a wag - a role defined by who your man is and what material goods he can buy.

It all leaves me wondering who these women are and why they sell themselves to tabloids after sleeping with famous footballers? Even worse, it makes me wonder when we, as women, became subjugated to money-worship.