Do people still watch Fox News and like, actually think it's a legitimate and fair representation of the events unfolding around us? Or do people recognise it for the awful and vulgar parody that it is?

Take, for example, the above shrill interview/ expose!!! about an OLD Heather Mallick column in which she wrote about Sarah Palin on her CBC blog. Heather Mallick, who also writes for the Guardian newspaper over here, is a funny, fabulous, feminist and writer and so, I love her. She's outspoken and in a world where outspoken, independent and free-thinking women are viewed as suspicious, uncouth and bitter bitches, Heather Mallick is not free from such unfair judgements.

This isn't the first time Fox News has tried to fuck with Heather Mallick and even Canada. In 2004, Mallick went on the O'Reilly Factor to debate Canada harbouring two American soliders who deserted the military and headed for safety in Canada. You can read about her take on the experience here.

And if you ever want proof that sexism and misogyny is still thriving, you should just read some of the comments on her blog. Most of them, hopefully, will be deleted before you click over there. Nevertheless, I have a feeling that the sudden influx of hateful comments, might have something to do with the recent coverage of Heather's blog post about Palin on Fox "News".

Getting back to the coverage of Mallick's post on Fox "News", just a couple things stand out:

2. Mallick does NOT say Republican men are "sexually" inadequate; rather, she says:

'It's possible that Republican men, sexual inadequates that they are, really believe that women will vote for a woman just because she's a woman.'
Context, Fox News, CONTEXT.

Nor does she actually call Palin an "Alaskan hillbilly" but instead, writes:
'John Doyle, the cleverest critic in Canada, comes right out and calls Palin an Alaska hillbilly. Damn his eyes, I wish I'd had the wit to come up with it first. It's safer than "white trash" but I'll pluck safety out of the nettle danger. Or something.'

3. The CBC is not solely supported by Canadian tax payers, as alleged by Fox News. Take a look: 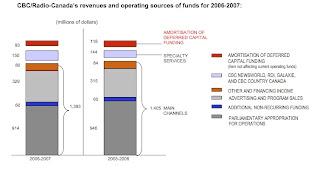 5. And nowhere in Mallick's post can I find her claiming that Palin is sewing up the "white trash vote". Or where she accuses Palin of not really being a woman. Or where Mallick calls out all Palin supporters as white trash.

Overall, the Fox EXPOSE!! is full of so many inaccuracies and hyperbole's, you should read Mallick's full article and then watch Fox News and decide for yourself. To put it bluntly, Fox News is a fucking disgrace to journalism and news programmes.

Ahh, needed to feel a bit angry, did ya? Watching Fox will get that anger going, should you need it. It doesn't even have to be a "news" show, really, although those tend to be a bit quicker of a jolt to the adrenal system.

SO glad to not watch TV any more, particularly not US TV (although ... there seems to be quite a lot of fascination with American programming over here, oddly).

It's almost too easy to get mad at Fox News but thankfully, we don't get it in Canada or the UK.

I LOVE TV and since it pays my salary, I like to be up on what audiences are watching. British TV is miles ahead of American and Canadian TV and recently, it seems all North American shows are remakes of British ones (Little Britain, Baby Borrowers etc)

I love British TV, grew up with Monty Python & Black Adder, thanks Dad for the introduction!

And Thank You for pointing this out to all our fine American friends. Unfortunately the news down there seems to only be about who's called in a 5150 on which movie/music star.