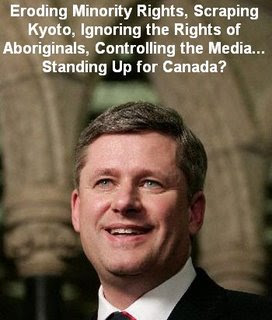 Fuck Stephen Harper and the Conservatives.

I received my overseas mailing ballot for the October 14 election this morning and I'll tell you right now: I would sooner NOT vote than vote for Stephen Harper.

I don't like the Conservatives - especially Stephen Harper - and not just because I'm some flaky left-wing hippie. I don't like them and Harper because...well, I guess I'm just enlightened and socially mature. Seriously though, here are just some reasons as to why Harper blows:

- He promised to instate fixed election dates (he lied, and is no doubt, going to profit from calling a snap election)
- He refused to sign onto the Kyoto Protocol
- He is George Bush's lapdog
- He cut all funding from women's advocacy programmes
- He is against same sex marriage
- He is a cyborg

Even though the candidates in my riding (Parkdale-High Park, Toronto!) have yet to be announced, I already know who I am voting for: The NDP!

I love the NDP for many reasons but most of all, because it was founded by an awesome Scottish dude who was way ahead of his time and, not to mention, Keifer Sutherland's Grandfather: Tommy Douglas.

So, please, fellow Canadians: don't sleepwalk to the Polls on October 14th! Do NOT give Harper the majority he wants! If you do, we're officially through!
Posted by Jennifer at 12:34 PM

Don't forget he gave families $1200/year for daycare, which is TAXED at year end!!! Giving you money so you can have your neighbour (that's what they said at the time, no way would i let my neighbour watch my kid) or family member (what if you have no family near by, like us, what then) watch your kid and pay them something. Have they seen what daycare expenses really are? Nothing like making your earnings increase so come tax time you have to PAY MORE. Thanks Conservatives! At least Liberals were TRYING to open more daycares/spaces then it got scrapped by these boobs.

Anonymous said...
This comment has been removed by a blog administrator.
10:50 AM

I mean, besides make promises they know they won't have to keep.

And what is a cyborg and why is that a bad thing?

Cyborgs are kinda creepy, but that might just be my dad (who technically qualifies, having an electrode embedded in his brain to control Parkinson's-like tremors - and a switch in his shoulder, to turn it on and off).