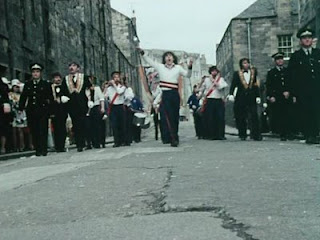 The film, written by Glaswegian Peter McDougall, was first broadcast in 1975 and explores sectarian divide in Glasgow. The film takes place on the day of the huge Orange Walk in Glasgow (July 12) and centres around 17-year old John, who is the baton twirler in the Muirhill Flute Band.

John, although somewhat aware of what the Orange order stands for, enjoys taking part in the pomp and circumstance of the marches. As the film progresses however, he slowly becomes disillusioned as his fellow marchers become drunk and purposefully march through a Catholic area of the city, playing offensive songs and as such, all hell breaks lose.

As bottles are thrown, John runs for cover and is pelted with shit (yeah, nasty). The men in the parade seem all too keen to take part in the fighting while John, thoroughly disturbed, retreats into the background. As John's mate exclaims that Scotland is a Protestant country and if they (Catholics) don't like it, they can go home. John seems the only voice of reason and replies, "They're Scottish just the same as you and me".

As much as I find Orange walks vulgar (not to mention un-Christian), I'm also kinda intrigued by them. I suppose because previously moving to Glasgow, I had never seen one - let alone, even heard of them, except maybe in passing on the news.

Honestly, the first time I saw an Orange march, I was standing in line at the check out of the Maryhill Tesco when I suddenly heard the booming drums. Turning to the old man behind me, I asked, "What's that?" and pointed to the parade of men outside.

"Aye, that'll be an Orange walk; Scotland's own KKK"

And maybe that's the problem; maybe people accept that it's just a way of life in Glasgow. Meanwhile, I am totally perplexed by it all. I tend to think that if these marches and organisations were say, pro-Protestant and anti-Jewish, that shit would not go down. It just wouldn't. And maybe if these marches took place in say, New York City, they would just not be accepted. I mean, remember when the KKK marched in New York City and they got their asses kicked?

So, I wonder: are these marches better ignored in the hopes that they just go away (unlikely) or protested in the hopes of showing opposition and fighting for them to be banned from marching?

Again, since moving to Glasgow and realising that Orange marches still take place, I was even more surprised to learn that the Orange order used to be very active in Canada. In the last 40 years, however, the Orange order has become irrelevant to Canadian society.

In an interesting interview from 1984 (that I HIGHLY recommend you listen to), Professor Cecil Houston, author of the book, The Sash Canada Wore, describes why the Orange order has become insignificant in Canada (social maturing, decline of loyalty to the crown, and uhh, "video arcades" - that is, young people realised they had better things to do with their time).

Which all leaves me wondering, can it happen here too?
Posted by Jennifer at 6:18 PM

As we've posted over at Hobbits, we're puzzled by it, as well. You're not alone - and it's certainly not just something that people accept! The only commentary we've had about it is that it's "such a shame" and that they're "racist" (umm ... Scots, Irish? Not particularly very much difference there, coming from outside, but OK). You're right to wonder about this, and the police sure as HECK think it's something - I've never seen so many police in all my life, as the ones lining both sides of the march we ran into!

Hey Jennifer,
I found your blog today by accident and started reading through it, it is lovely ;) And helpful also.
I am moving to Glasgow in the middle of January '10 with my boyfriend and have been rummaging about for as much information as I can possibly manage to find. We are moving for kind of the same reasons you have mentioned: adding some adventure to life, experiencing a different culture, for its aura, etc. Oh, and uni, he for a master's and I am running along the same lines.
I have found common information about neighborhoods, universities, flats and such, but these are all from tourist books and sites.
I know it is kind of crazy, but would you be interested in speaking over email? I have some questions about flats and the general status of Glasgow now. If you are into it, that would be so wonderful.
Oh, and my email is ieustathiou@bellsouth.net
Cheers,
Irene

What an ignorant individual you are as is your boyfriend!
You are coming from the States and condemning an organisation from an ignoramus
KKK and Orange Order are complete opposites.
Orange Orders are for all colours and even exist in African nations.
It is highly naive of you to surmise ,and credulous to label an organisation that wss initially established not out of hatred but necessity. To protect family lives against murderous Christian haters
Orangei is an integral part of British culture and is here to stay and if you inquire more of this Christian organisation ,in lieu of adopting biased assumpitions,you may well enjoy it.
It is a celebration of freedom fought for in history which has permitted ranting narrowing minded blogs to exist. These Christians gave freedom to the enlighrenment and will exist when ypu are no more.

You tell em Jen..he obviously doesnt want to receive any backlash for his comments as seen by his anonymous monicker HFH