WEEKEND IN PICTURES OR....I SURVIVED MY FIRST OLD FIRM GAME
Yesterday was the first Celtic v Rangers game of the new football season and shockingly, my boyfriend had an extra ticket and even more shocking? He took me (i.e. a dirty immigrant who is not emotionally invested in football)! Actually, I was really dying to go because I have heard that Old Firm games are nuts and besides, I've never seen a (near) riot so I thought, "what the hell?"

To be honest, I thought it would be a lot more chaotic and medieval, with people ducking for cover and charging at one another in drunken fervour. However, it was all pretty civilised. Until "the other team" took to the field.

Going to the Old Firm game was unlike anything I have ever experienced; it was wild. Initially, although I was excited to attend, I was also a bit anxious because I fucking hate the whole sectarianism bullshit that is rampant in Scottish football.

Also, I'm sensitive and didn't want to start blubbering (again) in front of Scottish people- like that time in Pollokshields.

Anyway, if you could somehow encapsulate the raw energy within the stadium of an Old Firm game, you could probably solve the world's energy crisis. That shit was FIERCE. 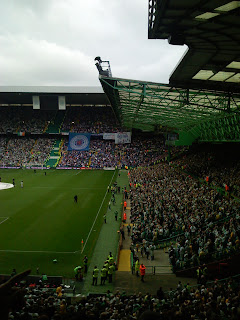 Directly across from us in the stadium: "the enemy"/ Rangers fans.

It was somewhat interesting because Celtic and Rangers fans went to great efforts to antagonise one another. Celtic fans were wandering around with beach balls and sombreros - to highlight the fact that Celtic are still in the European Champions League while Rangers are not. When I dared to point out to my boyfriend that actually, sombreros are Mexican, he glared at me and told me not to be so literal.

Rangers fans, meanwhile, win the award for douchiest banner ever. I don't know if you can see it in the picture above, but some fans painstakingly made a banner that read:

"The Queen's 11
God Save Our Queen
God Save YOUR Queen"

On the one hand, I gotta give 'em props for creating a banner that would piss a lot of people off but on the other hand, she's "our Queen" only via murder, rape, pillaging and war. So, really, I'm not sure that's worth pointing out to people? It's kinda like if I went up to a group of Native Canadians and was all, "hey dudes! God save the queen!" They'd be all, "the Queen?! That old goat and her inbred family stole my land".

Also, there was another banner with little men on it, wearing Celtic jerseys and running after an ambulance. I was totally lost as to what it meant and even fellow Celtic fans around me were as equally confused. An "ambulance chaser" as far as I know, is a personal injuries lawyer (see Jim "the Hammer" Shapiro) and so I'm left to assume Rangers fans are implying Celtic supporters are ...trial lawyers? You got me, Rangers fans! 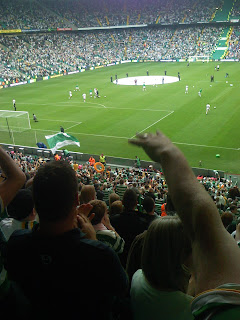 And the game begins! 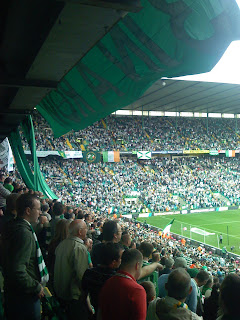 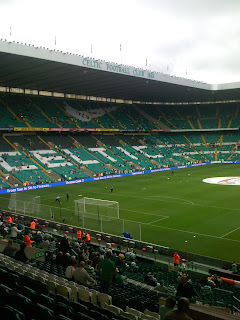 Empty stadium before the game (we got there early - too early!) 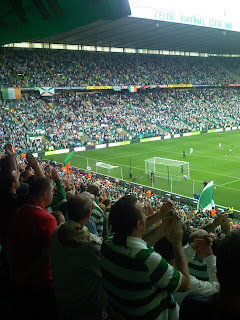 Overall, it was actually kinda fun (apart from the tension and fans calling players various four-letter words in thick angry Scottish accents) and like I said, unlike anything I have ever experienced. I think it would have been a lot funner if Celtic actually won - they lost to Rangers by an embarrassing 4-2. Ah well, everyone loves the underdog, right?
Posted by Jennifer at 10:46 PM

I'm still hoping to get to an Old Firm match someday. The only problem is I wouldn't know who to support...

Good guys at an old firm game?
Avoid the forces of darkness at all costs, by going to the game your endorsing something that leads to people being murdered every time its played. Its not theatre, its more like a trip to the zoo.

Ok, a bit dramatic but you *do* have a point and I totally agree. Like I said, it's wild but I went because believe it or not, it's actually listed as one thing to see before you die. And being an immigrant to Glasgow, I was curious to see it all go down in person.

I do understand where your coming from but without trying to sound patronising i do believe that it is quite naive for people who doent *totally* understand Scotlands sectarianism to effectively pick a side to support.
Im a born a bred Glaswegian and the biggest football fan your likely to meet (follow partick thistle home and away)and i never ever ever ever want to set foot in either the temple of doom or castle greyskull when the ugly sisters are slugging it out.
Get yourself down to firhill for a proper cultural experiance! lol :)

Anonymous - I understand sectarianism in Scotland enough to know what I know. And so, I'll stick with Celtic. Besides, Hartley is hot mofo.

Hi, jumped from expat-blog.com. Wow, watching football, live in the stadium? My hubbie has been trying to get me to watch a match but I keep saying no (like in here). Nevertheless, I think I will change my mind, and try to experience it at least once in a life time.

It's me again. Hope you don't mind I put you in my blogroll. Cheers.

Well, as a non-UK, i would suggest going to a football game - at least once. It's a unique experience to say the least....

And thanks for the add!

The reason for the ambulance chasers reference is due to the fact that Celtic are renowned for trying to be loved by all and try to potray themselves as the oppressed so then jump on the band wagon of any group they feel similar too. So they can both cry on each others shoulders. Exaggerated Irish connetcions, The PLO, Barcelona(Catalans). Any group that will entertain their inferiority complex and deep rooted paranoia

Anonymous - is that what the banner was meant to illustrate?! I didn't get that at all.

However, who *doesn't* want to be loved by all? I can't knock Celtic fans for that - but then again, maybe it appeals to my Canadian inferiority complex.

Also, once upon a time, they (Irish Catholics) were oppressed so maybe that's why they tend to go on about it, no?

Not sure what an ambulance has to do with being oppressed or jumping on a bandwagon. I think it's more likely to do with the (incorrect) view that some of my fellow Gers fans take, which is that Celtic won the league last season because of our fixture congestion (caused by waterlogged pitches, game called off after Phil O'Donnell's death etc.). I think the inference is that Celtic will try to latch on to some kind of unfortunate event, hence the ambulance chasing, in order to get games postponed and gain themselves a perceived advantage.