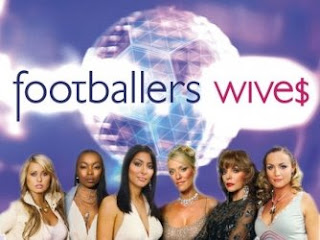 This past weekend my friends, Claire and Kate, and I randomly met a WAG. Initially we had no idea who she was, when she approached us for a light for her cigarette.

My friends and I started chatting to her, lamenting that Ashton Lane just wasn't what it used to be. She agreed with us and commented that the Chip was full of "artsy fartsy" types. As she delicately raised her cigarette to her lips, my eyes caught sight of her HUGE tear drop diamond engagement ring.

She held out her hand to display the ring. Now normally I'm not impressed with diamonds and more often than not, am concerned with the ethics and what civil war they could be funding. This ring, however, was stunning and I had never seen such a rock as huge as hers.

"I'll tell you what though, I had to go through a lot for it," she added.

Immediately (and perhaps cynically?) I thought she might be a gangster's fiance because, not only am I naive, but absent-minded and totally forget that I live in a city with various football teams whose players, apparently, are huge stars and make loads of money for kicking a ball around.

As we continued to chat away, she revealed some personal details and suddenly I put it all together.

This stunning woman that we were casually talking to was the partner of a famous footballer. And being the barbaric and uncouth North American, I just came right out and asked her.

My friends and I were floored. The gorgeous fiance of a famous footballer was sharing a smoke with us mere plebeians.

We chatted a bit more and as she finished her cigarette, we wished her well and headed off to a pub. My friend, Claire, who knows all the dish about every famous and infamous Glaswegian, turned to Kate and I, and gave us the scoop about her and her famous partner.

Unfortunately, you see, there are Scottish tabloids that thrive on airing every intimate detail about famous Scottish couples. Since I never read rags in the past (and am a dirty immigrant), I wasn't privy to this woman's relationship with her famous dude. It was rather unsettling to think that this poor woman's private life had been splashed across the front pages for public consumption. Even worse, I don't think she ever courted the spotlight - unlike other WAGS or semi-famous people - and now every other punter in Scotland knows her and her business and has an opinion about it.

Still, it was thrilling to think that we met her on such a random night and how cool she was.
Posted by Jennifer at 1:05 PM

I do admire you respecting the privacy of this WAG. My daughter works in a dental surgery in Bucks and is forever treating famous folks who are remarkably down to earth. She tells her old mum in conversation via phone (I live in Scotland) but I admire her (almost) confidentiality policy.

Well, I might mention who's popped in in conversation - but that's as far as it goes! As if anyone's interested in Bill Oddie's fangs anyhow!

I just want to know how big is the ring? Hehehe.... Is it solitaire? What kind of cut?

And what did she have to go through? Fighting over him against the other 2000 women?

I have yet to see a Scottish celebrity in Glasgow. Adrian's seen Robert Carlyle a bunch of times and swears he saw the woman from Red Road walking in the Botanic Gardens.

Lena - I'm very nosy and want to know everything about everyone but after meeting this lovely WAG and then my friend telling me all about her public sufferings, I felt awful for wanting to know the scoop!

Finally woken - not sure what a "solitaire" diamond is? Nor do I know the cut. I'm not into diamonds, you see. All I know is that it was HUGE!! She had to go through some very public affairs - not hers, mind you - but her partners!

Katie - I've seen a good chunk of Scottish celebrities, mainly through my work. On Tuesday, for example, I saw Neil Oliver. Cool!

You met Cheryl Cole?!!!
Bloody hell.
What was she doing in glasgow?

Michael - nah, not Cheryl Cole/ Tweedy; I would have recognised her. This WAG isn't in the spotlight but her dude is.