I have moved flats many times in the last two and a half years but two things have always remained the same: no matter where I lived, I had to stay in a traditional tenement flat and it had to be located in the west end.

As obnoxious as it may sound, I've always been a west end type a gal. Whether it was sheer nostalgia from living on Park Terrace as a student in 1999/2000, I absolutely had to be within walking distance of Gibson street, a park, Ashton Lane (although, Lord knows, it ain't what it used to be) and a decent cafe selling good coffee (which is rare in this city). It was just one of those things. If the flat was outside the west end, forget it; it was a deal breaker. I was cutting close the first time, when I lived on Garrioch Road because it hovered between North Kelvinside and Maryhill (bandit town).

My current flat is located between a precarious state of being in the west end AND city centre. It's perfect because I can walk anywhere and more importantly, my work is a mere 15 minute walk away. I was happy enough in my quaint and ancient flat...until things started falling apart. First it was the ceilings, then the lights, and then finally, the gas fireplace. It seemed to quickly reduce to a modern take on the Money Pit.

Well, perhaps I've matured because I am moving to the Southside. Shawlands to be exact. Some would say that Shawlands is the "poor man's version of the west end" and I'd say, I guess so because I'm pretty poor from paying west end rent rates. Besides, Shawlands ain't that bad and some of my former west end residing friends live there (albeit they own their flats while I just rent). Hey, it even has a couple of awesome cafes.

Nevertheless, I will now be further from my work but I'm determined to try and avoid taking the bus - not because of any environmental concerns I may have, but mainly due to the fact that some buses are just....spectacles of unearthly creatures.

More and more bus drivers in Glasgow are Polish and I've often wondered what they must make of Glaswegians because, no doubt, they probably conclude their opinions based on the people that ride their buses.

So, despite the fact that cycling in Glasgow is a near death wish, I've been thinking of buying a bike. The only thing, however, is that there aren't any second-hand bike shops in Glasgow, as far as I've seen. Perhaps with all that money saved from no longer paying west end rent, I can buy this beauty: 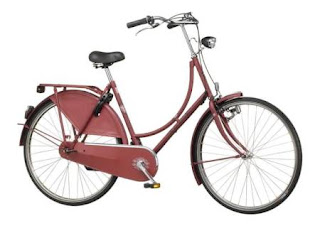 Hi
I have heard that some charities sell second hand re con bikes and I think you may find one in Castlemilk area.

Just thought, maybe the Barras has used bikes? god knows, you can find everything else there.

My brother used to live in Shawlands and he thought it was pretty cool so I'm sure you'll settle down nicely there. Can't help with the second hand bike shops unless you fancy coming to Edinburgh to buy one and cycling home?

Good luck with the move! I've lived in the same west end flat for nearly three years - Adrian and I are trying to move but we're starting to realise we can't really afford west end rates.

I love my neighbourhood but my flat could be nicer. And less moudly.

Loth - Shawlands are cool and I'm beginning to come around to the idea that there is life beyond the west end! As for bikes, I'm going to try the Barras and see what they have...

Katie - Thanks! I don't know why but it seems like there are less afforable flats in the west end for rent. I seem to recall there were far more a year ago!? Hence why we're moving to Shawlands - there were no one bedrooms for around £550 that we liked!

I logged on to comment that the Barras has used bikes, but someone beat me to it.

They definitely have used bikes, but they aren't of the greatest quality. You won't find a nice bike there. Or, if you are handy, you could fix one up that you bought there.

Look on gumtree. That's where we sold ours....

Riding a bike in Glasgow isn't that bad. You just have to hold your own a bit. For a bike try Common Wheel. http://www.commonwheel.org.uk

Unknown said...
This comment has been removed by the author.
9:48 AM

Houlland said...
This comment has been removed by the author.
4:33 AM