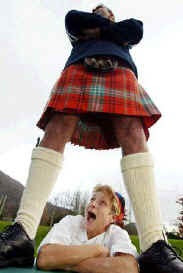 I'm not sure which is stranger: the fact that people are looking to specifically date men by nationality or that they're taking to the internet to find dating advice when it comes to Scottish men.

Do you want to know what it's like to date Scottish men? I'll tell you: it's like dating any other kind of Western dude! Except that some Scottish dudes are obsessed with soccer and have weird accents.

What I can confirm, after living in Glasgow for almost three years and dating a weegie for almost two, is that a lot of Glaswegian men:

(b) are temperamental (even more so than me)

(d) have hot accents (even after two years, I sometimes am at a loss as to what my boyfriend is saying)

(e) create a facade of confidence (although some may well be genuinely confident, which kinda makes them a wanker)

Obviously the above list does not apply to all Glaswegian men and certainly not Scottish men in general. I think the West of Scotland is unique onto itself and the "macho" stereotype of it is still pervasive to this day unfortunately.

So, if the above list appeals to you, by all means I suggest dating a nice working class weegie - but just remember to never ever dare schedule something on an old firm day.
Posted by Jennifer at 11:17 AM

I married a Scottish man. When I met him he was sidled up to a bar wearing a Barcelona strip and gold Elvis glasses.

I think I enjoy that my Scot is def. a guys guy and obsessed with all things sports, but has just a pinch of EuroTrash which means he can clean up nice without being overly metrosexual.

But yes, do not cross him during an Old Firm game....

Ohmygod. That is SO funny! Touch of Eurotrash! Ha. I would agree with that actually (with regards to my weegie bf).

My bf is totally butch and into the football and yet, has a lot of Clinque stuff....

I am married to one of those rare creatures: a Scottish man who can't stand football. At family functions involving my more traditional family, he always ends up in the kitchen, chatting to the women, because he has no opinions to offer on whether Rangers are keech this year, which is all the men are talking about. I feel very lucky.

I'm Rae, I live in Toronto, currently I'm at the start of seeing a Glaswegian. He too doesn't care that much about football. He's a hoot! I ask him to slow down and articulate. He does keep an eye on his money. Of course he likes to drink!

I lookin' for one of those Scottish fellas .... where can I get one in Charlotte, N.C.?

Omg so I stumbled across your blog and right now i'm going through an "early" life (I'm 20) crisis, and i want to drop everything pick up and move to Scotland.

I have tons of questions for you. Can I e-mail you?

I also am having a mid-twenty life crisis and the idea of finishing up grad school and moving to Scotland is beyond appealing. I admit I too am guilty of this being partly due my interest in Scottish men. I was unaware this was a common fantasy lol. Apparently we have all been reading too many romance novels about sexy Scottish highlanders lol : ). I myself am guilty of being a huge fan of Karen Marie Moning's Highlander romance novel series. On the up side for those of us stuck outside of Scotland and not able to move immediately you can always try an online dating site and see about importing one ; ).

me name is rama.looking fer a scotsman.he has to come to canada fer a visit .also if he has a big big heart.looks are not important.if he has a heart of gold.nothing else really matters.rama

I'm from Australia, I've recently met and started to get to know a scot. I don't know him that well yet but he makes me laugh so easily. I've only ever dated Aussies and kiwis, anything I should know?
Ps Karen Marie Moning's highlander series is one of my fave's :-)

This I Meri Belle and I'm having a Mid-50's crisis, sort of. I wanna get away, too. I've always had a thing for bagpipes, kilts, castles, breads and all the trappings. I have a passport, maybe I should max out the cards and just go there, Scotland, that is... maybe...

I met a Scot while on holiday! The best,i hope to see him again! Liz

You looking for a Scottish guy?

Any Canadian girls looking for their dream Scotsman?
I'm Jamie, 30 from Aberdeen, Scotland. Work in the oil & gas industry.
I guess I've a thing for Canadians... Love the accent and love the country. I've visited a good number of times!
Anyway, if your interested reply to this post with your email address, name and age and I'll get in touch.

I am newly 46, Iraqi War vet, female.....of Scottish descent, my mum came here at 17. I am looking to connect with a Scottish man....here or in Scotland. Hopefully Scotland, where I was lucky enough to to to school for awhile. I am planning to walk across Scotland next summer...any takers? Contact at thaurilick@yahoo.com
Tamisin

My Scottish boyfriend is quite the stereotype.. he's definitely a ned, he only wears a quilt to formal events (basically never).. although being he's a ned he's not the social type.. but he has a thick accent and after two or three years with him i still get baffled.. NEVER mention the English is you do you will release an unwanted rant.. also ive noticed Scotsman have crazy tempers and mood swings but the upside is theyre protective about that thats theirs.. the Scottish really dont like foreigners but my man loves me even as an American with english and german decent

I've been with 1 Scottsman. He had the most gorgeous, penis I've ever seen in my life. Length, girth, smell, taste! Campbell must be a very potent blood line. USAF

Hi there I am a prof Scottish guy 45 and just adore the Canadian accent. I would love to meet a Canadian woman who lives in Scotland.

I'm 45 & Canadian and would love to meet a Scottish fellow. I lived in Scotland for a brief time 20 yrs ago but have been in Canada since.

My sisters there. Right now. She is 54

I'm 24 scottish and live in scotland leave me an email baxie2012@hotmail.co.uk x

How do you feel about dual citizens to Canada and Australia? I'm currently in Australia but was thinking of moving back to Canada, particularly BC. Maybe you could make it worth my while? I'm 25, my email is hthro@hotmail.com

How do you feel about dual citizens to Canada and Australia? I'm currently in Australia but was thinking of moving back to Canada, particularly BC. Maybe you could make it worth my while? I'm 25, my email is hthro@hotmail.com

My Scottish man is nothing like those horrible stereotypes. He's educated,kind, loving, intelligent and funny. I love him with all my heart. He's emigrating to marry me and has spent thousands of dollars to fly here every 6 weeks to see me. I've been to Scotland twice. We met by chance, but he's simply the best.

Hopefully you guys were just lucky finding your Scottish half, mine unfortunately even though being the biggest love and most truthful in my 30 years old life occurred to be the most painfull and violent Ive ever encountered
1. Scotts are alcoholics of the worst kind, aggressive violent and scum
Ungortunately this is the exemple they were given as children growing up on benefits, they do drink until basically they can stand, until they get aggressive and start beating a shit out of you, proving every single slap was the one you had deserved
2. They are lazy
Benefits given by the UK government made them so comfortable that as a woman you will be forced to be not only a mother, a housewife, a servant but also a provider to the useless parasite whose only aim in life will be to give orders and decide what's to be done or not to be done in the house
3. Mamma is more important than you will eve be
You as a woman would never ever be able to stand up to the mamma's standards. Unfortunately this is not a joke that when Scots do procreate within their own families it should be treated as common, and you *the one that is coming from the outside of the family* you should expect to hear that you are a come bucket, used rag or other lovely adjective your Scott primitive that I have never even heard in my life as a foreigner

Agreed my man died 28 years ago from head to toe he was gorgeous definitely including that luscious penis! It's time for another one of those Scotch Irish yummies!

Lucky sister she's my age, nothing like starting over with the best God has to offer ;)

Lucky sister she's my age, nothing like starting over with the best God has to offer ;)

Agreed my man died 28 years ago from head to toe he was gorgeous definitely including that luscious penis! It's time for another one of those Scotch Irish yummies!

There was this Indonesian guy working in KFC joints in Auckland and he deliberately delayed my order and made me wait for 40 minutes where as, Online Dating Advice for Men

Hi I am Liam, I am a Scot based near Edinburgh, I am 21, 6ft2, have blue eyes, dark wavy hair and work in the entertainments industry as a producer and special effects consultant. I also would like to point out that unlike the above I hate football (would rather go see a stage show), don't drink or smoke and don't have a temper! I really love a good laugh and would love to get to know any females from the US, please feel free to drop me a line at Liamablacktheatrical@gmail.com and let's see where it goes ;)

Unknown said...
This comment has been removed by the author.
3:41 AM

Anonymous..wow you went through it eh...?

Dated a gorgeous masculine 49yo Scottish social worker from Bathgate living here in Australia. Incredibly passionate, hot accent, had the whole Highlander warrior thing happening but totally mad so sadly had to end it. Miss his voice, laugh, humour and story telling still. Wish we had more like him here (without the crazy).