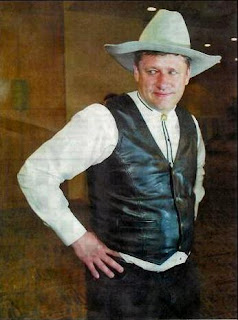 So the creepy bastard managed to stay in office for a little while longer. I am so disappointed in the Governor-General and her decision to allow Harper to suspend parliament.

Hopefully the coalition between the Liberals and NDP (with backing from the Bloc), will bring him and his party down in January. One thing to always remember is that the majority of Canadians DID NOT vote for the Conservatives in the past two elections; let that be your mantra.

Some people may think that Harper isn't that bad and want "stability" in a time of financial crisis and therefore think he should remain as Prime Minister. But merely pointing to the economy as an excuse to keep this man in power is bullshit. Absolute bullshit, people, and stop repeating such trite you read in the National Post.

I mean, did you not see the Finance Minister's (Jim Flaherty) economic proposal, which was the catalyst for this whole Liberal and NDP coalition!? Let me break it down for you:

The Conservatives, under Harper, proposed:

1. To cut back public service pay (when, honestly, it's shite as it is and needs not be tampered with).

2. Suspend the right to strike for federal employees even as the country enters a slump in which such strikes are highly unlikely. I mean, that shit is just illegal. What is this? China?!

It's already well established that Harper and his cronies are pretty much against supporting women and any group that aims to help women - especially vulnerable women (i.e. from poorer backgrounds, single mothers, minorities and so forth).

If those aren't reasons enough for you to be pissed off, well you're not human then; you're probably Harper.

Read more here and here
Posted by Jennifer at 12:28 PM

Moustache boy and thimble cup made an unconscionable deal with the Separatists. We all know that the Bloc Quebecois will do anything to further the interests of Canada....NOT!


Harper is a dick. Unfortunately, that dick got the most votes. All those items you mentioned...they were duly voted down...not enough votes in the house. He's gotta be just throwing that stuff out there to muddy the water! What REALLY pisses off the (ha ha) coalition is that they don't dare bugger off home for the holidays lest some of those numbskull Conservative regs and laws will get passed in their absence. So gee...they will just have to stay there and work! Poor wittle babies....

Time to go to another election. Maybe Layton will be able to convince a more sizeable portion of the population that he is Prime Ministerial material.
I hope so. Its time to let the NDP do to Canada what they did to Ontario.

Stag - the Bloc are not part of the coalition. Please stop spreading misinformation. The Bloc merely support the coalition between the NDP and Liberals.

In addition, Harper did not get the most votes. Indeed, he has a minority government and the coalition between the NDP and Liberals forms a majority. So, really, most Canadians voted between the different parties and not for the Conservatives.

And I'm not sure what you mean by letting the NDP do for Canada, what they did for Ontario???? Bob Rae is Liberal now.

Didn't put any misinformation out there....nowhere did I say the Bloc was part of the coalition.

But a backroom deal with the separatists to vote in their favor on ANY convidence vote for the next year and a half! Ha! Wonder what Dionne gave away to get that deal? But we'll never know...grin!

Harper DID get the most votes. There WAS no coalition when the election happened...Maybe a coalition will survive an election. That would be.....um...interesting. But it will need an election. Maybe a lot of people don't WANT that alliance....how else would we know?

Anyway, thats why the Tories made it to the left hand side of the speaker of the house. If it goes to election, maybe there will be enough people ticked off at him to give him the boot, and bring in somebody else. I prefer Layton myself, because Thimble Cup is dead in the water...he brought the Liberals to the lowest number of seats in their history. What a loser! I am looking forward to Ralph Goodale stepping up to the plate. He's a good man...I trust him. But not Bob Rae! He speaks double talk.

Yee haw...what a great political ride!!!!! What a great time to be in Ottawa!

You have a great Christmas now.

I was too young to remember what all went down in Ontario when Bob Rae was Premier. All I remember is "Rae days" and frankly, I thought it was awesome (more holidays!) But evidently Ontarioians hate holidays.

I like Layton but as for Dionne, I don't have an opinion either way; I'm more interested in the Liberals themselves. I could care less about the Liberals and the NDP making a deal with the Bloc. Honestly, what's the big deal with the Bloc?! They want to seperate from Canada? I don;t care. Most likely they won't.

Frankly all politicians lie and to me, it's just a matter of who lies the least and isn't the most creepy.

And this is why Justin Trudeau should run for Liberal leadership.

But wasn't one Trudeau enough? Remember him waving to the electorate, but using only one finger? I remember "Fuddle Duddle" tee shirts. Ahhh....distance has a way of being rose coloured!


Oh, and as usual, LOOOOOVVVE your pictures. You have a dab hand with a camera shutter.