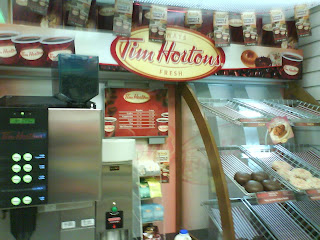 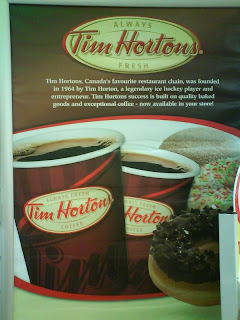 I found another "Tim Hortons" in Glasgow! I don't think I can quite grasp how bizarre it is and yet, also depressing because the coffee and donuts are nothing like the ones found in Canada. This one is located in the Spar near Caledonia University.

However, one thing that is totally better in Scotland? candy! 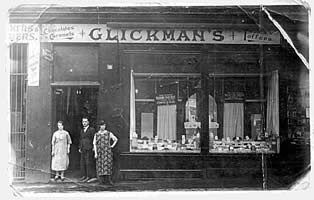 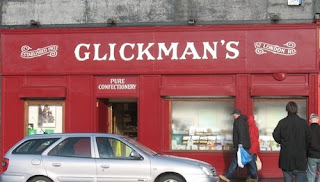 Paul and I went to Glickman's, the oldest "sweetie" shop in Glasgow (where I was told for the first time ever, that I have a "lovely accent") and was also featured in a great Observer article back in May 2006:

Glickman's sits on the edge of Glasgow's Calton district, once a proud working-class neighbourhood that thrived in Glasgow's boom years in the 19th and early 20th century. Sweets helped Glasgow become the industrial giant it was. Sugar from the West Indies colonies came on ships built in the Clyde to be processed in refineries beside the river - and cheap, easily available sugar is the historical key to the Scots amazing sweets and sugared-drinks habit. The Calton is sad now, no longer famous for anything except as the place in the UK with the lowest life expectancy (53.9 years, which is seven years less than male life expectancy is in Iraq) and sugar is certainly not the most lethal of the addictions that shorten the lives of the people there. Yet it is of enormous concern to Scotland's health agencies. The grim statistics on obesity and tooth decay are a huge embarrassment - they are the unarguable evidence of ingrained poverty and poor education in a country that prides itself on the standard of its schools and its newly devolved prosperity....

Sugar is part of modern Scots history. Every Scot over a certain age gets the same rosy glow when they talk of the sweets of their childhood, of how a quarter-pound of small mint imperials got you 52 sweets. And a glance at the old cookbooks show that sugar has long been a key to Scottish cooking - as garlic was to the people of the Mediterranean, or chilli to the Thais. Shops like Glickman's in Glasgow or the fabulous Candy Box in the seaside resort town of Largs, which stocks an amazing 250 varieties of traditional sweet shops in jars, are testaments to that proud culture and those traditions. And if there's one thing all those Scots sweet-lovers will tell you, after lovingly naming their favourites, it's how happy the sweets made them, even in the hardest times.
Read more here
Posted by Jennifer at 3:13 PM

I don't know what Tim Horton's is but I do know that I love donuts. I may have to venture to Caley on my lunch break.

2 years ago the Krispy Kreme guy at Stanstead airport told me they were getting a distribution center by Glasgow and Krispy Kreme would then be in Scotland. Still no donuts, grr....

Oh, god. I love the donuts too. Krispy Kreme are decent but Tim Hortons are heaven in deep-fried dough. Greggs is acceptable when erally really desperate for one!

Tim Horton's in Glasgow? No. That's just wrong. Like Guinness, Tim Horton's can only truly be appreciated on its home turf.

Loth - it is so wrong but just try it. Just once. It isn't even close to the real thing! And the donuts? I'm not sure what they are but they ain't Timmys!!