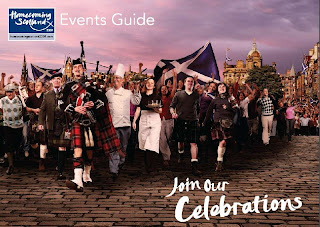 Not only is 2009 the 250th anniversary of Robert Burns' birth, it is also the year of Homecoming Scotland. Mostly just a tourist ploy, Homecoming Scotland is a myriad of events which will be taking place all over Scotland, in order to encourage Scots, folks of Scottish descent or just people who love Scotland, to explore this great nation. There will be all sorts of activities taking place such as whisky tours, golf tournaments, researching your ancestry courses, and much more.

Obviously the notion of encouraging the Scottish diaspora to return is not new; I myself was encouraged to return to Scotland (after my year as an exchange student in 1999/2000), in late 2005 when the (now former) First Minister, Jack McConnell, came to Canada in a bid to lure Canadians of Scottish descent back. And now, after Glasgow being hailed as one of the world's top 10 cities, it's only a matter of time before more and more people realise that Scotland is fucking amazing.

Indeed, it seems that I'm not just the only Canadian to be lured back "home".

Never thought I'd see the day.

Up there with Beirut!

Umm... I must ask the inflammatory question, "What about Scotland isn't a tourist ploy?" ;) Oh, right: the whisky. :)