I somehow ended up at The Shed nightclub on Friday night. One minute I was drinking with friends in the west end at The Three Judges and the next minute, we're all piled into two cabs heading over to The Shed. Please don't let me go there again.

I've been to The Shed once before and you'd have thought that I would have learned my lesson then. Since my last escapade to the Shed, the clientele have become younger and dare I say it, perhaps even hipper? The male haircuts were more angular and artistically dishevelled; the girls wore beehives and looked like a mix between Duffy, Amy Winehouse and Peaches Geldof (an oxygen thief if there ever was one).

However, I was just too sober, too old and too hot (temperature wise) to stick around. I made it until about 1.30am and then left with my pal, Erica, leaving Tim, Lauren, Laurie, and Nir to kick it 1999/ 2000 old school style.

On Saturday, I was still struggling with the after effects of The Shed but nevertheless managed to meet up with my friend, Claire, and her sister, Lisa, for the Body and Soul Fair. Not one who believes in "souls", I was a skeptic heading into the event and my suspicions were confirmed with stalls advertising "past life regression therapy", "reiki", and "clairvoyants". I could only manage one eye roll for fear of amplifying my hangover. In the end, however, it was all worth it because I managed to get a back massage for £10.

Afterwards, we headed to Wagamama for some lunch, before stumbling upon the newly-opened Tea Rooms - which is run by the folks who own The Butterfly and the Pig (one of the best places in city centre for some cheap pub food/ lunch). I am absolutely in love with the Tea Rooms and cannot wait to go back for some "proper" afternoon tea.

Following the previous nights theme, after tea and a (couple) glass(es) of wine, we somehow managed to end up at the State Bar for comedy night, wherein I was mocked for my outfit and insecurities in front of the audience. That's what you get for showing up at a comedy club slightly tipsy and sitting in the front row. Good times!

Immigrants should not be able to take them unless they had been advertised to British workers first, she told the BBC.

Non-EU workers have to go through a points-based system to seek work but most EU citizens face no restrictions.

Ms Smith told BBC One's Andrew Marr Show that it was right the government made sure that the points-based system was "responding to the current economic circumstances".

From April, non-EU workers wanting to come to Britain without securing a job beforehand must have a master's degree - rather than a bachelor's degree, as currently - and a previous salary equivalent to at least £20,000.

The Conservatives say the government is only tinkering at the edges of the problem and say a cap on immigrants from outside the EU is needed.

Another day, another UN report claiming Glasgow to be a degenerate shithole full of junkie murderers.

Yes, apparently Scotland's murder rate is the fatest-rising in Western Europe and the sixth-fastest in the world, accoring to a new report by the United Nations.

The murder rate in Scotland stands at 2.1 deaths per 100,000 people, the joint highest in Western Europe with Finland and Portugal.

The figures outstrip the murder rate in the Czech Republic and Portugal, both of which are plagued by knife crime and recorded a 30 per cent rise over the same period.

I'm not claiming that there isn't a problem - obviously there is but rather than violence itself being the problem, I think it's an effect of the real problem: poverty, lack of education, social injustice, and vunerable individuals existing on the periphery of society.

What I am claiming, however, is that these reports do little good and indeed, perpetuate the stereotype that Glasgow is a violent cesspool of civilization. And yet, wasn't Glasgow just named one of the best cities in the world? So when we're not stabbing one another, we're busy being one of the most cultural, vibrant and exciting cities in the world?

I'd also point out that Glasgow is up there with Finland - a notoriously liberal country that ranks third in the World Democracy Audit. Meanwhile in Toronto, there were 69 murders in 2008 and 336 shootings - just sayin'. 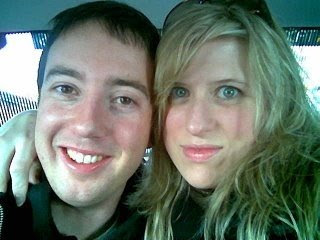 Paul and I shortley after we met two years ago. Ah, young love... 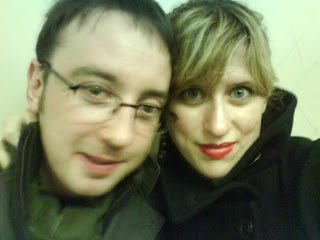 And today - cycnical and old in the age of modern love.

Happy Anniversary!
Hmm, such a thing of wonder in this crowd
Im a stranger in this town
Youre free with me
And our eyes locked in downcast love
I sit here proud
Even now youre undressed in your dreams with me
Posted by Jennifer at 12:04 PM 2 comments: 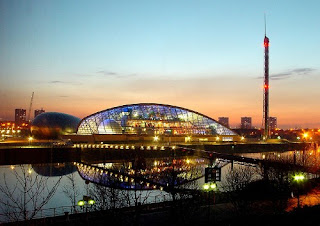 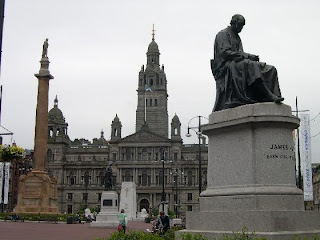 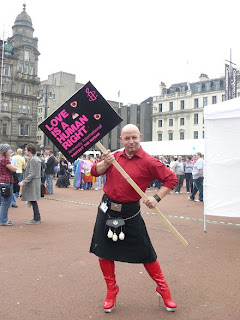 Ever wanted to know why I was ranting about Stephen Harper and why a coalition was better than him but were afraid to ask because you didn't understand how Canada works? Check out Rick Mercer's break down of it all!
Posted by Jennifer at 1:34 PM 2 comments: 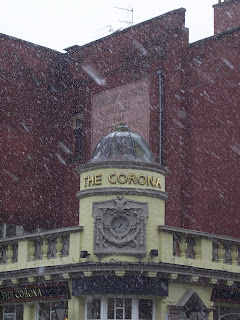 It snowed! And it even managed to stay on the ground! 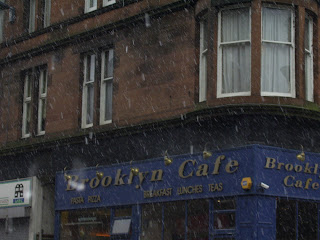 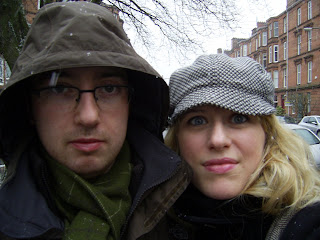 Me? I'm happy about the snow and as a Canadian, feel right at home. Paul? Not so much. 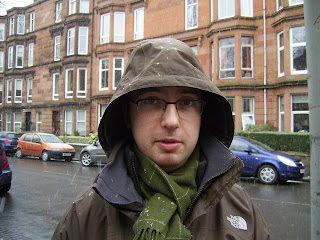 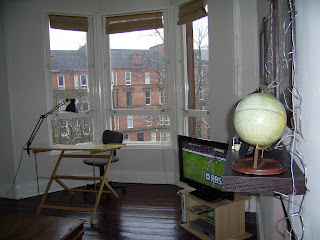 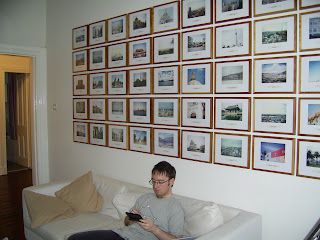 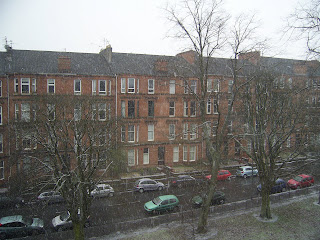 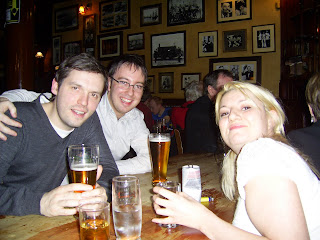 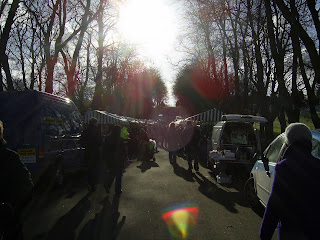 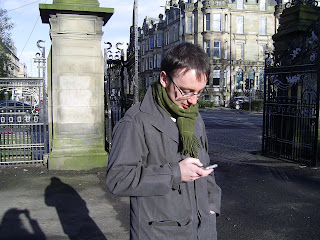 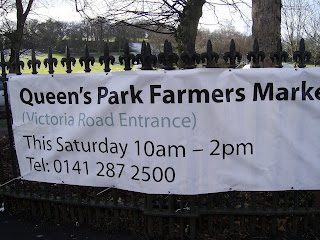 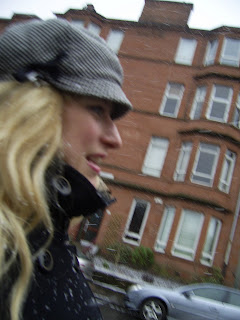 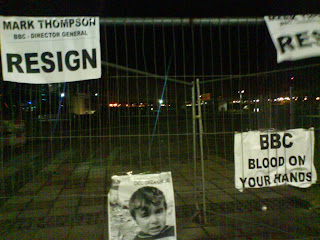 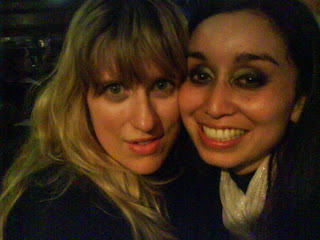 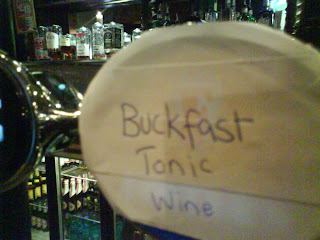 You know you're in an awesome bar when they have Buckfast on TAP!
Posted by Jennifer at 9:51 PM 9 comments:

On Saturday night, Paul and I went to dinner at Grand Fish and Chips in the Merchant City with friends, before heading off to Mono for some drinks with even more friends. As a Canadian the name, "Mono", for a bar/ restaurant always seemed slightly curious to me - that word being a shortened term for Infectious Mononucleosis in North America and to me, conjures up memories of high school and many afflicted friends suffering from the dreaded "mono".

During our drinks at Infectious Mononucleosis or rather, Mono, one of Paul's friends pointed out David Shrigley, who was having a drink behind us. More than likely you may not recognise the name but you would his drawings (see above). Especially if you read the Guardian on a Saturday. He's a great artist and perhaps Glasgow's most famous contemporary one at that.

Yet another reason why Glasgow is one of the coolest cities in the world.

If you've seen the Scottish film, Hallam Foe, you'll recognise that he did the opening title sequence as well:

Posted by Jennifer at 2:29 PM No comments: