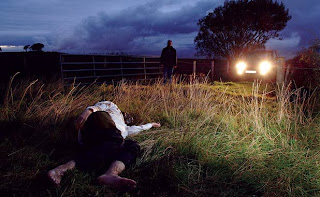 Friday night Paul, Paul's Mom, and I went to the Tron Theatre to see Stuart Carolan’s Defender of the Faith.

Set on a farm in south Armagh in 1986 - at the height of the Troubles - the play is centered around a father ("Joe"), who is a local brigade commander for the IRA and his eldest son ("Tommy"), whom we are led to believe is also involved within the IRA - although the audience isn't sure to what degree. Until the end of the play, that is. The farm hand, Barney, is also active in the IRA and is suspected of being an informer to the British Army (known as a "tout") and as such, an IRA enforcer arrives from Belfast to source out the informer.

At a tight 90 minutes, with no interval, the play was fast-paced and dark but extremely gripping. The actors, especially Martin McCormick (who played the eldest son, "Tommy"), were brilliant. My only complaint would have been the ending; the final scene felt clumsy and if it had been tagged on at the end by the playwright.

Sadly, the play finished on Saturday but if you ever get the chance to see it, go! Until then, check out the trailer for the production that just concluded at the Tron: