TODAY IN PICTURES
Although Spring doesn't officially begin until next weekend, it felt like Spring today in Glasgow; the sun was shining and it was warm. The weather seemed to bring out all sorts: tulips, hippie drummers and BNP (British National Party - total racist anti-immigration douchebags) members. 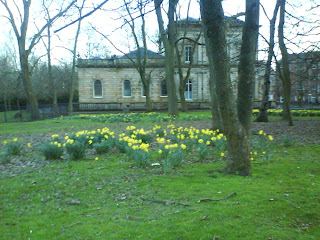 Tulips on the Southside 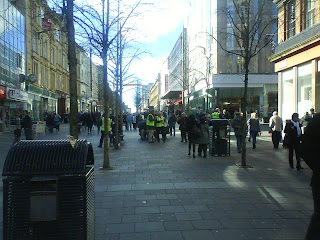 Along Sauchiehall Street this afternoon, Claire and I spotted BNP members (in the bright vests with union jacks on the back) handing out pamphlets and attempting to talk to anyone who was unfortunate enough to fall prey to their "British jobs for British workers" chants. Perhaps it was due to the sneer on my face but they didn't approach me - thank god too because I'm one of those nasty immigrants they so despise (albeit not as much as the non-Anglo-Saxon ones).

Unfortunately I only had my phone on me and hence the shoddy quality of this. The nice weather seemed to bring out the Braveheart clan drummers. Hot skirts!

Ah, you saw the BNP guys too! I saw a few of them on Argyle Street - and their protest wasn't going very well.

u have tulips already! Mine haven't sprouted yet, dang. Soon enough I guess :)