Being Lauren's birthday on Saturday, a group of us - the original 18 Park Terrace 1999-2000 crew - went out for dinner to Mother India. After inhaling the delicious tandoori roasted haddock with puy lentils, washed down by white wine, our crew headed to The 78 for some overpriced mediocre lager.

In a stroke of birthday madness, Lauren decided she wanted to go to a casino for her birthday. Accordingly, we all piled into two taxis and headed to the Gala Casino on the Clyde. Having never been to a casino, I was quite intrigued by it. I quickly decided that since I only had £10 in my wallet, I would only spend £10 on chips. After a quick tutorial from Lauren in Roulette I placed my .50p chips across the table.

And proceeded to win back my £10 AND and additional £8. Seizing the opportunity, I quickly cashed out and claimed my £18 back. I can safely say that after witnessing some poor souls slamming down £50 after £50 on the roulette table, I have no further inclination to gamble; it's never been one of my vices.

After claiming my winnings, I headed back to the Southside for Jamie's housewarming party, where Paul was. I stayed long enough to eat a delicious cupcake his girlfriend made (oh god, so good - she works at a catering company) before heading back home with Paul.

Sunday, Paul managed to be lucky enough and score some last minute tickets to the CIS cup final between Celtic and Rangers at Hampden Park. I stayed at home to cheer on Celtic and watch them win 2-0! Get in (as they say here)! 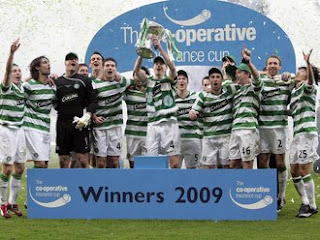 The film is centered around two American civil rights activists, who are in Belfast investigating police brutality. When one of the Americans is murdered, while in the company of an IRA sympathiser, a conspiracy is unearthed involving a successful Central Intelligence Agency plot to influence the 1987 UK General Election and keep Margaret Thatcher in power.

Although fictional, the film was inspired by the RUC's and British Army's alleged, "shoot to kill" policy of (mostly) IRA suspects. It's a great film that I had never heard of before and even reflects my own outsider's bemused/ disgusted opinion on orange walks (albeit they are on a much smaller scale in Glasgow than in Belfast).