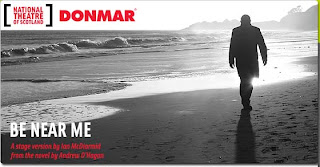 Reminder: please do not allow me anywhere near an open bar. Especially in Scotland.

Saturday, Paul's Mom and I went to see the National Theatre of Scotland's production of Be Near Me (watch the trailer for it here) .

Be Near Me is a Booker Prize nominated, captivating and moving story about love, morality and regret, told through the experiences of an Oxford-educated Catholic priest. Father David is assigned to a new parish in a crippled Scottish town on the Ayrshire coast, where sectarianism runs rife. He is a naïve and unworldly man, ill-suited to his new parish.

Drifting away from his peers in the town, he is drawn to Mark and Lisa, a troubled teenage couple who attend the nearby school. Their everyday world of drunken nights and recreational drugs is as exotic and enthralling to him as his cloistered life is to them.

Be Near Me is adapted by the celebrated Scottish actor Ian McDiarmid (Star Wars) who also appears in the central role of Father David. The cast also includes Blythe Duff (Taggart) and is directed by the National Theatre of Scotland’s John Tiffany, who directed the renowned Black Watch.

Be Near Me is a co-production between the National Theatre of Scotland and the Donmar Warehouse.
The adaptation of the play itself was good. While the characters themselves could be classified as stereotypical and cliched, I'd argue that such characters exist in the West of Scotland.

My only and main argument against the play, was the casting. The play was adapted for the stage by the actor, Ian McDiarmid, who then cast himself as the lead character, Father David. To my mind, Father David was meant to be a Priest in his 40s. Ian McDiarmid, meanwhile, looks about 65. My suspension of disbelief was constantly being interrupted by the fact that the character of Father David's Mother, looked younger than the Priest himself.

On Sunday, Paul and I went accompanied his Mom to Mass at St Andrew's Roman Catholic Cathedral as it was Palm Sunday. Sitting there, I realised why I never got into the whole church thing (besides being a reluctant atheist/ agnostic): it's pretty boring.

You know what the Catholic church (and indeed all Christian faiths) need in this country (besides a whole lotta updating)? A PR make over! Now if someone like Eddie Izzard was up there preachin' and teachin' the words of Jesus, I would totally go!

Stick the Rev IM Jolly in the pulpit and I'd be right there in the front pew :)

Join millions who have already discovered easier methods for investing in Ripple.

Learn from profitable eToro traders or copy their orders automatically