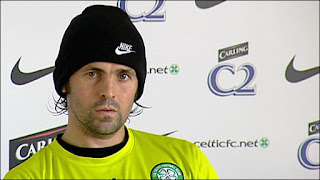 I adore Paul Hartley - I think he's a great player who gave his all for Celtic. More importantly, however, I think he's hot.

To me, he's hot because he doesn't look anything like a footballer. Rather, when he lets his beard scruff grow (*swoon*), he looks like a sensitive and dishevelled artist/musician/ bohemian babe and what cultured lady doesn't love that homeless artsy look?! Seriously, the more it looks like he rolled out of a dumpster, the hotter Hartley is!

Better get that number 11 Celtic jersey before it's too late.
Posted by Jennifer at 12:29 PM