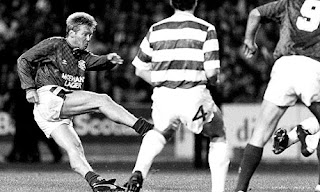 The most striking aspect of any glance back towards the day Maurice Johnston first pulled on the blue of Rangers following his transfer in July 1989 is that some of the comments made by the club's followers would have seemed more apt 200, not merely 20, years ago.

"It's a sad day for Rangers," insisted one. "There will be a lot of people handing back their season tickets. I don't want to see a Roman Catholic at Ibrox. Rangers have always stood for one thing and the majority of the support have been brought up with the idea of a true blue Rangers team."

Read more from the Guardian article

This is also why whenever Paul and I are back in Toronto, we're not allowed to go see Toronto FC (Mo Johnston is the Toronto FC Manager and former Head Coach). Frankly, I don't care - I just want to attend a football game and be able to drink beer!

You do realise that the real reason for Mo doing this was lost in the furore caused by his actions. Rumour round Firhill way was that he felt his career had gone downhill since he left the mighty PTFC and he was looking to get his name noticed again. The other rumour of him doing it for money seems a bit far fetched.