With Paul Hartley away to Bristol, I'm struggling to find someone, ANYONE, at Celtic even half as hot as Paul Hartley.
Hartley at Bristol, sadly without the beard scruff too
As previously mentioned, I liked Paul Hartley because he looked nothing like an arrogant football player but instead, resembled a sensitive bohemian intellectual. And, I suppose, he was a good midfielder but honestly, who am I kidding?! I'm Canadian - I like hockey - what do I really know about football!?

Nevertheless, in my quest to further my interest in football, I need an emotional investment in it. Or rather, I need a dude to crush on now that Paul Hartley is, sadly, somewhere in England. Sure, there is Darren O'Dea, who is, what I would term "cute" but necessarily "hot", mainly because he is only 22 and it just feels wrong to crush on someone so...young?

However, all hope is not lost. I give you Paddy McCourt (originally from Derry and 26)! 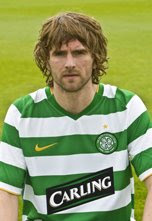 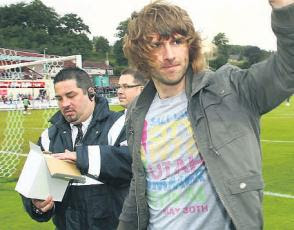 Dude does not look like a footballer - more like a drummer. Or maybe a bass player in an indie band. He looks like he rocks out to Led Zeppelin and hard too.

As you can see, I have a "type" and I'm the first to admit it (dark hair; dark eyes; half-way intelligent; looks like they rolled out of a dumpster; scruffy). Unlike some of my Scottish counterparts, however, I'm not really hung up on height, weight, or income.

After mourning Hartley's premature departure from Celtic, I told my boyfriend about McCourt, my new Celtic crush. To which he replied, "shame he isn't very good!" Hey, like I said, I'm Canadian. Besides, who cares!? McCourt looks more like the kinda guy who would go snowboarding with me, listen to Dinosaur Jr. and drive a beat up Volvo and as far as I'm concerned, that's hot!
Posted by Jennifer at 11:12 AM

me too... humble chap that he is

Sadly, I'm the only female in the house and hate football but I have to admit Paddy McCourt is a bit of all right. Wouldn't get me watching footie mind you!

Now if he WAS actually in an indie band - he'd need to be on percussion. Ever band needs a heart-throb drummer. He looks as if he could be talented with his hands as well!

LOL he does have the indie look about him!

I know it's not normal but I have a crush on Paul Hartley.
Anyway, check out Kyle Beckerman on the US Men's National Team.
Words cannot describe....