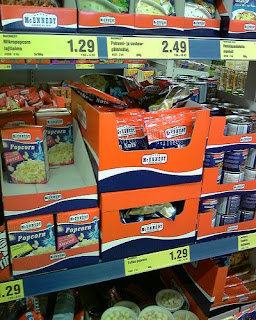 As a Canadian in Scotland, there are a few things I am weary of: coffee (finding a decent cup), sunshine (how long will it last?!) and finally, any type of food branded "American style". For example, "American style" bagels, "American style" pancakes, and "American style" ceaser salad dressing. I know when something is advertised as "American style", it is only setting itself up as a poor imitation of how Europeans imagine American food to be. And after trying the "American Style Ceaser Salad Dressing" from Lidl this past weekend, it's no wonder that Europeans think America is a land of vast doughy bodies devoid of culture and sophistication. I mean, if this "food" is being pedalled in Europe as what Americans eat and have introduced to the culinary world, I might think the same. However, having lived North of my American cousins, I know better.

This past weekend, I ventured into Lidl for the first time - despite having lived in Scotland for over three years now. You see, I'm more of a Tesco-kinda gal (my love for Tesco is well-known). Lidl is a German discount supermarket that sells cheap European brands of food. Despite being cheap, I've avoided shopping there as Lidl has come under fire for its treatment of staff:

In fact, so controversial is the company's reputation in mainland Europe that in 2004, Ver.di, a huge German trade union with 2.5 million members, published a book called Das Schwarz-Buch Lidl Europa (The Black Book on Lidl in Europe). This was based on more than 3,500 accounts submitted by past and present employees. An updated 144-page English translation came out last year, detailing complaints from some of Lidl's 170,000-plus staff working in 23 European countries. The charges were wide-ranging, numerous and often serious. Hidden cameras were said to have been found in one store in Wasbek, north Germany - they were being used to monitor staff. "Mr D's partner is expecting a baby and, as he says himself, he needs a lot of money at the moment," read one meticulously logged transcript. And on it went: "17.25: Mr D describes his poor financial situation and talks of impending fatherhood and the additional expenses it involves."

The Black Book said that in Portugal the main retail union criticised Lidl for routinely asking staff whose contracts of employment were due for renewal whether they were planning to have children. It said that the company was subsequently fined for its preference for maintaining a pregnancy-free zone. When the Guardian asked Lidl's UK press spokeswoman - who asked not to be quoted by name - to comment on the above allegations, she said that she could only speak on behalf of UK operations, but that the Black Book was out of date and riddled with errors. She claimed that several foreign newspapers were made to issue retractions, but could not, or would not, specify what the errors were, nor which media organisations were compelled to retract their stories. When we asked for the number of the German head office - if there is one somewhere on the internet, it's not somewhere obvious - she said that she did not know the number, and nor did anyone else within Lidl UK.

As I wandered downtown yesterday in the rain, I realised that we needed some shopping and lo and behold, I found myself out Lidl. And against my personal principles, I wandered in.

For all you Canadians, Lidl is a lot like Food Basics, only not as...er, basic and the food is slightly better. In fact, the food seems pretty decent (not to mention cheap) . Unless, of course, they're branded as "American style" (in which case, they should be avoided at all costs!)

God, I'm not a Lidl fan - despite the fruit (if it keeps) being cheap and the ice cream delicious, when I tried to call them with a complaint there was no regional number for contact which means a drive back - if you can be arsed - but that is basic bad patter!

In the words of Frankie Boyle in a Mock the Week slot of Commercial's That Didn't Make It To Air......"Lidl's own brand shampoo - because you're worthless". Hmmmm....

Yea, my mother-in-law told me to go to Lidl after seeing those products in a newspaper insert.

I've only tried the "American style Cranberry cake" but it tasted like crap.

I do enjoy ASDA's American range of ready meals though!

Lena, after reading accounts of how Lidl treats its employees, I'm not surprised. Not sure I would go back.

Melaina, I tried the "ceaser" dressing and it was minging. Didn't know that ASDA has it's own range of american style stuff so i might give that a try!

As with coffee in this country, avoid anything 'American': just don't go there. It's crap. All of it.

Make your own. From a recipe.

And coffee: Lavazza. Ground ultra-fine, right before it meets the French Press.