Gary Tank Commander - Gary, on leave from Iraq, back in Scotland. Hilarious.


Burnistoun - comedy is so subjective but I don't know, I find this hilarious. Especially the songwriter and female singer sketch.


Limmy - I don't know why but on some dark level, I find his stuff hilarious

And finally, an oldie but a goodie:

As of 1 November, my UK Ancestry visa expires and instead of heading back to my homeland, I've applied for an extension on my visa. I dutifully filled out the application, ensured I filled out the forms correctly and most importantly, sent the Home Office a cheque for £465. I then sent off my application via Royal Mail. For those outside the UK, the Royal Mail are currently in a huge dispute and were on strike last Thursday and Friday (and may now be on strike again very soon). Of course, I could have made my visa application in person - for a mere £665 - but despite what the Daily Mail says, I'm not one of those plush immigrants sponging off the system, who has that kind of cash. (Seriously, fuck the Daily Mail).

On a related note, how lame is it that I need to pay EXTRA for "special delivery" to ensure that my mail gets to its destination?! Seriously, Royal Mail, that's your JOB - delivering letters and boxes from point A to point B; how does it get away with charging EXTRA!?

Anyway, I'm now in immigrant limbo, waiting to hear back from the British Bureaucratic Gods as to their decision on my livelihood.
Posted by Jennifer at 4:24 PM 13 comments:


I don't normally watch the American programme, How I Met Your Mother, but had to watch last night's episode when I heard that my beloved Canadian coffee joint, Tim Hortons, was featured in it. It's strange to watch a half hour sitcom, that's actually only 21 minutes, and features awful canned laughter.

As a Canadian overseas, I too have been known to get tipsy and sing, "Oh, Canada" as the tears well up.
Posted by Jennifer at 12:09 PM 5 comments:

If you haven't had the delight and privilege of reading the Daily Mail columnist, Liz Jones, let me summarise her entire shtick: she pretty much hates everyone, particularly other women and especially American women. Nothing quite holds her contempt as much as American women.

But unlike quirky, cool British girls, U.S. ones have no real style when it comes to fashion, merely putting on whatever American Vogue tells them to.

They (and I am talking mostly here about women who work in the fashion and media worlds, and who live in LA or New York) are also incredibly, earth-shatteringly, want-to-eat-your-own-arm-when-they-are-talking-to-you boring.

We shouldn't be fooled by Carrie Bradshaw and her ilk - they have scripts. When you have the misfortune to meet one, they will give you a glassy, unfocused stare, like that of a shark, swiftly followed by the mantra: "Hi, how are yeeewww?" (as if they care, unless you are A) male; and B) own a yacht).

American women are also mindbogglingly stupid. Rare is the New York female high-flier who A) knows how to dial Britain; and B) can ever work out that they might just be ringing in the middle of your night.

They all have several masters degrees, which makes me think the American version must be multiple choice, are fearsomely ambitious, despite having absolutely zero talent (have you read the super-sycophantic dribblings in New York Magazine? Ohmigod!), and obsessed with staying young and marrying rich.

Why any man would prefer one of these honey-skinned, difficult, vacant, blow-dried-daily divas to a lovely, super-intelligent, witty, self-deprecating British girl (OK, me) is beyond belief.

It should be noted, however, that her ex-husband left her for an American woman.

And just this past weekend, she was at it again with this blanket statement:

I told you all American women were stupid.

Obviously I'm Canadian and even if I were American, I wouldn't be offended in the slightest because Miss Jones comes across as nuts, neurotic and bitter. Nonetheless, I have been on the receiving end of such Anti-American attitude. It's only happened to me once, in the three and a half years since I've lived here, and I am convinced the attitude was entirely due to the fact that the woman assumed I was American.

About two years ago, Paul and I ventured into IJ Mellis Cheesemonger for some posh French cheese. As we stepped into the wee shop, a well-dressed middle-age woman followed us in. Paul and I poked around the store while the middle-age woman went to the counter to order. After deciding which cheese to buy, I went to the counter as well. The lovely shop attendant came over and upon asking her how much the Vacherin was, the middle-aged woman slowly turned to look at me, gave me a once-over glance and assuming I was American, narrowed her eyes at me and LITERALLY upturned her nose to me.

Maybe it was because I asked how much the cheese was but honestly, I can only assume it was because she thought I was an uncouth and barbaric American. After she left the shop, Paul asked me what her problem was. I was so shocked by her incorrect summary of myself, I could only manage to respond in four-letter words.

Who knows? Maybe it was Liz Jones herself. Then again, I highly doubt Miss Jones would step foot in Glasgow.
Posted by Jennifer at 11:36 AM 15 comments: 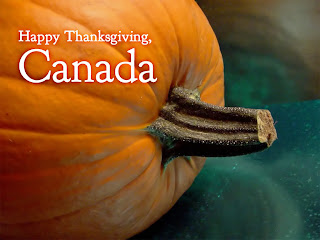 I love Canada this time of year - the crisp air, fall colours, and seasonal vegetables. Mainly, I miss the pumpkin pie and Thanksgiving tie-in coffee drinks at the Second Cup (the Canadian version of Starbucks).

There's been a lack of updates round these parts because:

a) I've been back in Canada for a much needed holiday

Stressed out, you see, because my ancestry visa expires on 1 November. Upon returning to Glasgow, I quickly had to find all my applicable documents, fill out an extension application and of course, cut a cheque for a mere £465.

Adding to my stress levels is the fact that my landlord wants his flat back by 2 November. So, that'll be the fifth (FIFTH!) time I will have had to move since moving over here in April 2006. I couldn't bear with the thought of moving YET AGAIN so Paul and I toyed with the idea of buying a flat - specifically in the "new builds" in the Gorbals. After viewing the flats last night - which are nice - I wasn't convinced because frankly, there was fuck all around. Sure, we could have a lovely three-bedroom flat, but what happens when you run out of milk?! Or need to pop over the bank machine!? Also, if I wanted to live in a soulless condo, I would have stayed in Toronto.

Nah, I'd rather spend an outrageous amount of money on an old tenement one-bedroom close to things.

Needless to say, we haven't found a place yet.

Some Photos from My Holiday in Canada: 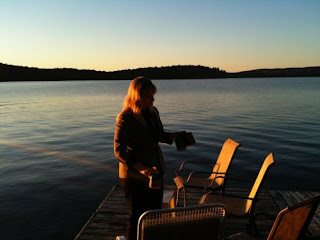 Drinking beer, lakeside, during sunset in Muskoka. Does get anymore Canadian than this? 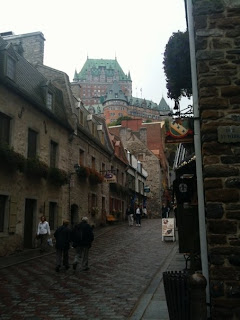 Old Quebec City with our hotel, the Chateau Frontenac, looming the background 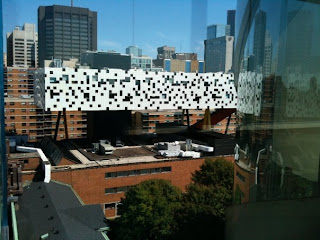 Ontario College of Art and Design 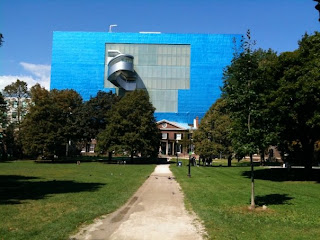