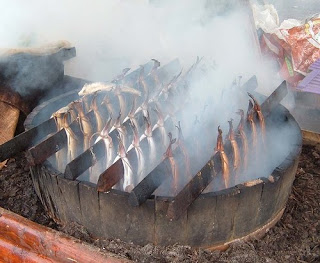 I'm a bit late blogging about this but last weekend, Lauren and I went to the BBC Good Food Show, where I ate my first Arbroath Smokie - which was unbelievably delicious. While waiting in line for my smokie, some middle-aged and middle-class dude, cut in front of me (while the two guys behind the smokie counter looked on) and like a true Glaswegian, I called him on it and told him to get to the end of the line. And like a true asshole, he ignored me and marched up to the smokie booth, handed over his money and barked out his order. The two gentleman proceeded to apologise to me and serve the rude (and most likely NOT Scottish) asshole. In my most angry Canadian tone, I replied, "It isn't you who should be apologising - HE SHOULD BE!!!!"

Of course, he continued to ignore me and would not meet my gaze.

I honestly believe that he wouldn't have tried to pull that shit on me if I were a man, leaving me to believe that he was a misogynistic, Southern English asshole. Sure, I may be quick to judge him but seriously, if I wasn't some blonde North American and rather, a Glaswegian dude, there is NO way he would have tried to jump the queue.

In a country where people line up at a bus stop, people will not tolerate line-jumpers, especially angry Glaswegians who are only looking for an excuse to beat the shit out of you as it is. I guess I've assimilated more than I realise because I felt like smacking him upside his smug face.

Speaking of assimilation, a couple weeks ago, my step-father emailed me a story about a Scottish woman who moved to Toronto:

No matter how much I tried to adapt and fit in, still the questions came bubbling up. "Why do they use a different size of printer paper than in Europe?" And, most importantly, "three weeks' holiday a year? Is that it?"

Scottish friends mocked me for sounding Canadian, while Canadians still treated me like a foreigner. I was in cultural limbo, drifting between traditions and dialects, neither completely one thing nor the other. At the same time, I was an invisible immigrant: a member of the visible majority to whom no resettlement services are offered. Although I obviously enjoyed many advantages to help me settle in, I was experiencing genuine culture shock. I looked the part, but under the surface I was a mass of insecurity and unhappiness, terrified of unwitting social, or worse, work-related faux pas.

Jesus, you're lucky to get three weeks holiday in Canada. It's usually only two weeks. Nevertheless, I had a similar experience when I first moved to Scotland. Why do stores close so early and rarely stay open late? Why is paper a different size here (A4 rather than 8 x 11")? Why can't I open a bank account? What the hell am I going to do with 5 weeks holiday?!

And again, this weekend, The Globe and Mail featured an article about a Canadian couple who moved to England:

Why did we up sticks and leave our home, jobs, friends and family, all of which we loved dearly? To have the experience of living in another country. To take up an exciting career opportunity. To be closer to France (among other countries). To shake things up. To leave our comfort zones. To drive on the other side of the road.

From then on, I'd face that question in just about every conversation with someone for the first time. It was the common thread in small talk with co-workers, neighbours, estate agents, farmers at the local market, pub landlords and bed-and-breakfast hosts.

I'm often asked the same thing, why did I move from beautiful Canada to gloomy and grey Glasgow? I answer honestly and say because I love this city; the people; this country.

We agree - this country is fab. Of course, since I live in Edinburgh, I would have said nothing to the man and just stared in contempt at him and let the anger well inside me until I got an ulcer. I have yet to have a smokie. It is on my list.

I second that. I love this country. I feel so at home here, but there are those moments we one feels truly foreign...but I got used to the question of "why did you move here" as I moved from Saskatchewan to Oklahoma and the number one question was "WHY HERE!?!?!"....well, at the time I didn't have a choice, but this time I did and I came to Scotland. My Great Grandfather left Scotland for Canada 120 years ago and my Dad jokes about how I have returned from canada via Oklahoma back to Scotland. It is still a bit surreal that I am here.

I have heard from my family that immigrated here (to Canada) how they end up not feeling fully of one culture or the other, after years have passed. I think most immigrants relate to that, i.e. Spanglish. Growing up I heard a mixture of Polish and English and have heard the same from people of other ethnicities.

Being a vegetarian most of the time, I'll admit that I'm not the ideal candidate for that smokie. But I HAVE TRIED the smokie! I can't imagine anything worse, unless rancid raccoon meat somehow can come full of wee, tiny bones.

Living in Glasgow, I at least have the excuse of being a student. I'm perpetually asked, though, whether we'll stay in Glasgow when it's all done ("hell, no, do you want to live in Glasgow!"), whether we like it here ("except for the long months of darkness and misery"), and the like.

People are odd, no matter where you're from, and where you are. If you can't stand them, well, it's likely that you've never actually considered them as being different from you. So, you should move abroad for as long as it takes for you to realize just how screwy your own people are.

Wintered Scotland will always be the main ingredient for me!

PurestGreen - you have got to try a smokie, especially if you are on the East coast. Do you eat fish?

Prairie Girl - welcome to a fellow canuck! Scotland is fab.

1001 Petals - I feel Canadian in a lot of ways but more and more I am taking on the ways of a true weegie. maybe in 20 years time I will identify myself as a Scots-Canadian but I currently feel like a Canadian living in Scotland at the moment.

DaviMack - you sound miserable!? I suppose it must be hard coming from sunny California to Glasgow. I'm not that bothered by the rain and darkness but then again, I'm coming from Canada and could barely tolerate the -30c winters so really, this is a cake walk. Also, I moved here by choice so hell, yes, I want to stay. I have to take issue with the smokie though. Smokies are SOOO yummy?! maybe you had a mingin' smokie?!

Anonymous - not quite assimilated yet because if I were a TRUE weegie, I would have head butted the dude, no?

Lena - winter in Scotland is, like I said, a CAKE WALK!

I'm not a big fish eater, but Abroath Smokies are amazing.

I get a lot of questions about why I'm in Glasgow too, especially being from New York. It's hard for me to explain why I want to be here, but I wouldn't go through the expense/hassle of getting a visa every few years if I didn't think it was worth it.