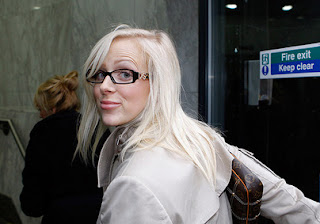 A Canadian woman, Jordan Wimmer, is suing her former UK boss for sexual harrasment. According to the article, the former boss, Mark Lowe (a hedge fund manager, of course), sent her an email about locking women in the trunk of his car and calling her a "dumb blonde," were meant in jest and weren't demeaning.At one point, Lowe sent a message to his employees, including Wimmer, describing blondes as "incapable of distinguishing cornflakes from a puzzle." At the time, Wimmer was returning to work after hospitalization for treatment of depression.

Wimmer, 29, originally of Mississauga, has accused Lowe of a campaign of harassment, culminating in an attempt to run her down on a London street. While testifying in front of a London employment tribunal Tuesday, Lowe, 59, described Wimmer's allegations as "gross distortions" and "hugely offensive."

But under examination by Wimmer's lawyer, Lowe was forced to explain a series of "joke" emails that he forwarded around the office to employees, including Wimmer.

One was entitled, "Who is your real friend?" The body of the email read: "Put your dog and your girlfriend in the boot of your car for an hour and then see who is happy to see you."

Asked if he thought the email was offensive to women, Lowe said he did not.

She has variously accused Lowe of subjecting her to sexual harassment and belittling her with comments about her "full figure" and being a "stupid blonde." She told the tribunal that Lowe brought prostitutes to corporate events and pressured her into receiving lap dances at strip clubs during business trips.

He told the tribunal that all of the women he brought to work were girlfriends, rather than hired escorts.

"I am not a monogamous man," Lowe conceded. He described overlapping relationships with a variety of female companions, though he said none of them were paid to share his company.

On the most damaging of Wimmer's allegations, Lowe was unequivocal.

Is this a case of British humour clashing with Canadian humour and Canadian hyper Political Awareness. Or, is this genuine sexual harassment? Frankly, the guy sounds like a total pig.
Posted by Jennifer at 5:20 PM

Pig. But, of course, I'm a North American ... so I think that women have both rights AND feelings, so, ya know, maybe I'm just not UK enough.

The guy is clearly a total knob at best, if not a borderline psycho. I on the other hand, after seeing Ms. Wimmer's pic on the Metro front page today, would quite happily abandon my fabulous lifestyle to nurse her back to emotional health with the use of coffee and donuts.

Concur - PIG. The kind of guy who, after amounting shit loads of money, thinks all women are sexually available to him - if he pays enough, of course.

George - so very thoughtful of you! You know us Canadian girls love donuts.