Lessons and Observations from an Immigrant Volume # 1203
Life as an immigrant is all about the Three A's: adjusting, acceptance and assimilation. Being a Canadian, I've had it a bit easier than other immigrants as English is my first language and the Queen is still on our money (and Head of State in Canada). Nonetheless, I'm still perplexed by Scottish (British?) behaviour and customs.

For example, I'm still perplexed by flooding. How on earth is it STILL possible for trains to be delayed due to flooding? How are streets still capable of accumulating water and resembling a dirty marsh? It's not as if rain is entirely foreign to Scotland?! Scottish engineers have had since the Industrial Revolution to figure out appropriate drainage systems. 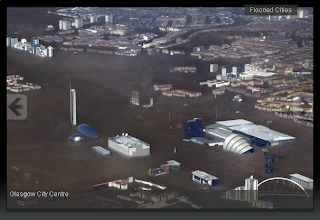 However, I've now adjusted and accepted to this aspect of life in Scotland and do not walk anywhere near amassed dirty water on flooded streets, as passing cars have been known to drive right through them, leaving a typhoon effect in their wake.

Another aspect of Scottish life that I've accepted, adjusted to and assimilated alongside? Text and email kisses. In all my working life back in Toronto, I don't think anyone ever signed off an email with a kiss ("x") nor did any of my friends - which many Scots seem to do. Initially I was perplexed ("Why is my colleague ending her emails with three kisses?") and would RARELY reciprocate. Perhaps it's because I'm an awkward and aloof Canadian averse to displays of affection.

In all honesty, it took me about three years in Scotland, before I would add a kiss at the end of work emails (YES, WORK).

Not to mention texts. Oh my god. They are mad for adding kisses at the end of texts.

And as an immigrant, I've now fully adjusted, accepted, and assimilated. I am now KISSING mad!

Hilarious! I think I jumped right on board with the kissing texts, except I only send them to girlfriends and not to guys. Work email kisses also yes, but not to everyone.

I hadn't even thought about it - how I just kind of shrug and start doing what others do. Ah, good times.

Oh, my. See: we've just thought that the few we've encountered are NUTTERS. We didn't know that it was a common theme. Goes to show you, I guess.

Yes, quite common and I've actually started to find it endearing.

huh, I was a little perplexed about these things too. i must be still adjusting!

DaviMack - how do i comment on your blog now?!

Even better - when the subway is delayed due to flooding.

Unknown said...
This comment has been removed by a blog administrator.
2:51 AM

I TOTALLY agree with the texing thing. I think I just look like a dumbass when I try to add them because I just start inserting x's everywhere just in case the person I am texting thinks I hate them if I don't add kisses at the end. It really causes me much more stress than they are worth. I thought about not doing it at all, but I didn't want to offend anyone. And then my friend (who is a Canadian who moved to Scotland) told me that she didn't add an 'x' on the end of a message to her boyfriend and he called her to see if she was angry at him. WHAT!? So strange...

Yes, I did it alone but i was lucky because I had some friends still in Glasgow from university but essentially I organised everything on my own.

I managed to come over via an ancestry visa (if you're from the common wealth and have a British grandparent), you can come over via that route). I didn't have a job or an apartment but i managed to find both quite easily. Don't get me wrong, I took the first job I could get but I did eventually did get one in my field.

I was lucky to have friends but have met some along the way.

Hope that helps but feel free to drop me a comment and I will respond!

Anonymous said...
This comment has been removed by a blog administrator.
1:54 AM

Unknown said...
This comment has been removed by a blog administrator.
4:30 AM

I'm Canadian from just north of Toronto. I happened to find this when googling canadian humour. I can not even imagine putting xx's at the end of work emails. I don't put xx's anywhere actually. Clearly I'm Canadian.

I saw the Hip in Toronto in November - packed and amazing. I too posted on my blog a picture of the backs of some people's heads as I happened to get 6th row seats at skydome. In fact, it looks a little similar to your pic (kinda, not really).

Lastly, I have no idea what "very strong Canadian wholemeal flour" is.

I miss Tim Hortons coffee like you wouldn't believe!!

That picture is computer generated, It's not a photograph.