Lessons From an Immigrant 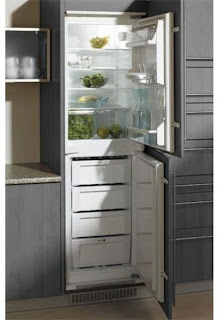 Two weeks ago, I moved into a beautiful flat in Queen's Park and after the initial move, the (brand new and fully-integrated) fridge and freezer seemed to stop working overnight. All my delicious Marks and Spencers ready-made meals spoiled and I had to chuck out about £20 of posh grub. I was furious! I tried everything - messing about with the fuses, plugging the fridge into another power socket to no avail.

For the past week - SEVEN DAYS, people - I have been using the freezing cold mud room (also known as the "porch" in this country) as my fridge / larder. For the past week, I have been running from the back kitchen into the front mud room (where my butter, milk and vegetables were stored) in order to make a mere cup of tea. It was an ordeal.

Finally, after much bartering and begging, a fridge engineer came out to my flat this morning. He hummed and hawed and pulled the entire integrated fridge from out of the cupboard. He seemed to think there was a serious flaw with it all.

Until he asked if the electrical socket was switched on. 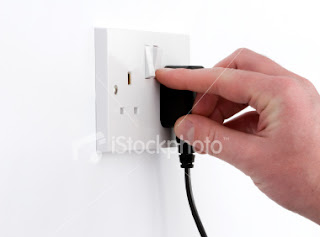 You see, dear readers and fellow Canadians, it isn't just a case of plugging in your appliances and you're good to go. No, you need to SWITCH the power on - as illustrated above - in order to activate the power socket.

And apparently the switch, to activate the power socket, was off.

It was such an obvious solution that the engineer said he simply overlooked it.

And with that, he put the fridge and freezer back in place amidst a flurry of apologies from myself. The engineer said that normally he would have charged for that kind of thing but I guess I had paid enough in my pride. Ouch.
Posted by Jennifer at 2:45 PM

Oh you poor thing... You know I bet it has happened to plenty of immigrants. One more thing learned!

It's something that just isn't ingrained, the way it is for the folk here. I sat for awhile the other day, wondering why my laptop was all dim and slow ... and then realized that I had to turn the stupid plug on! I mean, it's not as if they even have ground-fault-protectors in them! It's maddening! You can still get electrocuted with them, but, darn it, they can be turned off. And don't turn themselves off automatically when you pull out the plug, or anything, no. They can be turned off, just to piss off the people who want to plug something in later.

Hope you don't have kids visiting any time soon! If there is a switch to flip, they're on it...

What the heck is the practicality? Energy saver?

yikes, been there too! spent nearly an hour at my bakery job this summer trying to get a food processor to work at my work space....darn thing worked at the other counter, but not at mine! it was so frustrating! me mumbling and swearing under my breath and thinking about chucking the thing across the room.....i went and took a break and when I came back, i took one look at the evil machine and then it dawned on me as my eyes drifted to the plug in socket.....darn switch wasn't flipped on......learned my lesson

That is actually amazing.

I once started to cry because the stove wouldn't turn on and I thought that I had both broke it, and could not make my much needed dinner for that evening. Hard, uncooked pasta had never looked so good. It took me about 2 hours to figure out that you had to flip a swtich for any appliance in the kitchen to work. Why?!?
It's times like these where it almost seems worth moving back to Toronto. Almost.

omg that just happened to Murray when he was in Belgium last week :P The lights wouldn't stay on without him swiping his keycard and same with the fridge, needed a switch to stay "on"

Emily/ Prairie Girl - welcome to Scotland! Good to know I'm not the only Canadian struggling with those damn switches!