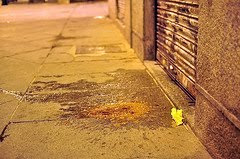 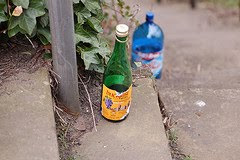 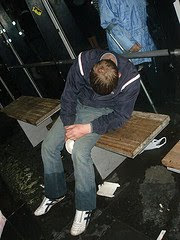 Photos from Jase Mueller - here
Glasgow is hardcore. Definitely not for pussies and ladies of the Temperance Society.
Last Saturday night, Paul and I went out with some friends for a quiet pint at a local pub. After the last pints were pulled and the pub was due to shut, we shuffled out into the cold and set upon finding another establishment that was still serving but wasn't a club (and, ideally, didn't have a cover charge). So, we headed to Sauchiehall Street to find out what was happening at Nice N Sleazy. The line to get in was way too long and I have policy that goes something like this: I don't wait to get in ANY pub. I'm not a diva but I also don't wait around in line to get into some hole in the wall to drink. I just don't. And on top of that, you want me to PAY to get in!? Get tae fuck. So, with that, we headed to The Box. I love The Box: it's open late, there's no coverage charge, and they play awesome music.
Anyway, I'm not someone who is easily shocked - naive perhaps, but I'm still pretty jaded - but walking along Sauchiehall Street on a Saturday night at 1.00am, was unbelievably surreal and just plain ol' disgusting. I've lived in Glasgow for about four years now and maybe it's because I don't often frequent the Sauchie strip at such hours, but I have never seen ANYTHING like it. It sort of resembled ...well....something like this - minus all the guns, of course, and handsome men like Clive Owen.
I'm not exaggerating when I say that I saw three people - THREE PEOPLE - being arrested; people stumbling drunkenly through the streets, looking like they've just survived a war; young girls teetering like gazelles in high heels; and utter drunken chaos.
Sauchiehall Street on a Saturday night is a surreal dystopian post-apocalyptic world visualised in films such as Children of Men and Blade Runner, only we're fucking living in it and minus the cool soundtrack.
Four years ago, when I first moved here, I fiercely embraced Glasgow. And like any relationship, I accepted all her faults, whatever they may be, and am devoted to her. However, this is something else. It's almost, dare I say it, terribly embarrassing. Can you imagine what tourists must think if they naively decide to take a late night stroll. A lot of people - especially Americans - have an idealised vision of Scottish people: that they're all Shortbread-baking, Haggis-eating, Kilt-wearing lovable people - and yes, the Scots ARE lovely and warm people, but jesus, I pity any poor tourist that stumbles across Sauchiehall Street on a Saturday night.
Posted by Jennifer at 10:20 PM

I made the huge mistake of going out on Sauchiehall Street on Halloween a few weeks after I moved to Glasgow..it was absolute pandemonium! I've never seen a street so chaotic with people.

True. I have fantasised about sealing off that wee bit of sauchiehall street between charing cross and rose street in the wee hours of a Saturday morning and gassing, or maybe irradiating those within.

The few times we've been stuck in it, coming back late from something, have been ... well, let's just say that we schedule our travels not to return via Central Station late at night on a weekend. Truly.

Perhaps this is why we haven't fallen for Glasgow: we LIVE near this crap, have had to put up with it for way too long (moved out of our last flat because of the downstairs parties, and now back onto Woodlands, where the carousing isn't so bad, but the singing of Rule Brittania is occasionally known to wake us from a dead sleep).

It's more than embarrassing: it means that, when people visit, we make a point of not showing them much of Glasgow. It's a disgrace.

DaviMack, a true shame that you haven't fallen for this city because there is so much it has to offer. Then again - and no offense - you don't seem like the kind of person who would fall for Glasgow. I mean that in the most honest way: you're from sunny Califorina; a self-confessed hermit; vegetarian and healthy!

What I mean is, Glasgow, I can imagine, is a world apart from California and in that sense, I can see why you haven't fallen for this city, which is too bad. Who wants to live and study somewhere they don't like?!

I do find Sauchiehall Street on a Saturday night embarrassing and, in a way, sad. I think it's an extremely bad relfection on West of Scotland culture as a whole: there is a serious drink problem deeply-ingrained in this culture.

I don't think it's a total disgrace and I have compassion for those that need to get completely wrecked and in such a state. I'm not full of contempt but rather, bewildrement and sadness. I don't see such extreme behaviour back in Canada and indeed, you don't get it on the continent. Obviously there is an element over here where people want to get completely out of their face and I don't think it helps when bars have crazy drink promotions and beer can be cheaper than milk in the supermarket.