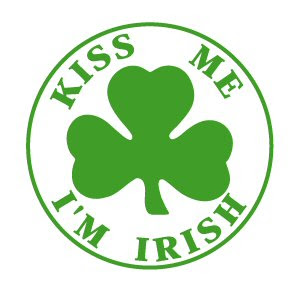 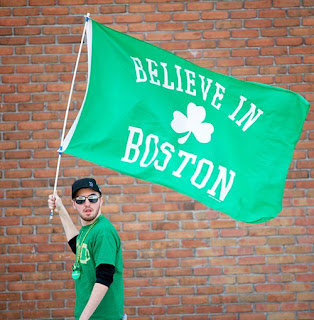 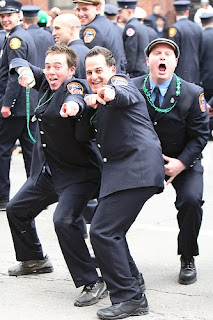 In any other city in the world, St. Patrick's Day is a day for Irish and non-Irish alike to enjoy a tipple or two. Growing up in Canada, I loved St. Patrick's Day because it meant that McDonald's had their strange yet delicious Shamrock Shakes. Once I turned 19 - the legal drinking age in Ontario (oddly, I never got drunk until I was of legal drinking age) - St. Patrick's Day was somewhat like Christmas: it came once a year and was the only time of the year where you could get absolutely wrecked and it was perfectly acceptable. In Toronto, if you appeared drunk in public on any other day beside St. Paddy's Day, people would think you're either a derelict hobo or worse, a pathetic loser (Torontonians are notoriously uptight).

In a (sometimes) religiously divided city (which, in reality, isn't even about religion anymore), such celebrations like St. Patrick's Day are politically charged. And in a city where everyone wants to know "which side are you on", you can't wish people a "happy St. Patrick's Day!" because you never know how they'll respond.

And you know what? It fucking sucks.

In any other city, like New York City - which has the largest St. Paddy's Day parade in the world, or Toronto or Boston, many people, whether Irish or not, manage to party without the ugly face of sectarianism or racism rearing its head.

Yesterday, I wished a friend a "Happy St. Patrick's Day" only to be told quite curtly, "I fucking hate that shit". Now, I am not saying that my lovely dear friend is anti-Irish and/or anti-Catholic - because she isn't. What annoyed me, however, was the fact that there was an assumption on her end. Or rather, there was an assumption that I was "celebrating" St. Paddy's Day because I was a Celtic-mad Provo. And perhaps it was naive of me to think otherwise. You see, sometimes I forget that I live in a city where people are fucking nuts.

And it got me thinking of that Ballboy song, I Hate Scotland, and I too thought, "sometimes I hate Scotland".

I hate the way we expect to fail
And then we fail
And then we get bitter because we failed
I hate aspects of living in the west of Scotland. I hate the "us" versus "them" element that is deeply entrenched in some people; I hate being lumped into a certain category because of what team I like; I hate how some people subtly try to assess other people's class and form an opinion based solely on that; I hate how some people are resigned to live in a country that has some of the worst poverty in the western world. Most importantly though, I hate Orange Walks and wish they would fuck off.

And like Michael Moore said in his brilliant film, Capitalism: A Love Story, that I HIGHLY recommend, " I refuse to live in a country like this, and I'm not leaving".
Posted by Jennifer at 4:35 PM

I have seen two orange walks since moving here and was furious each time. It really is just a bunch of thugs out for a stroll in order to provoke other thugs into a fight. Feckin bullshit. Wankers. Grrrr it gets me mad.

Yep - I hear you. I found it truly strange, not to hear anything about St. Patrick's day, nor to have people going around trying to pinch anybody not wearing green. It's ... odd, here, in so many ways.

qust said...
This comment has been removed by a blog administrator.
2:37 PM