You're A C*nt By The Way 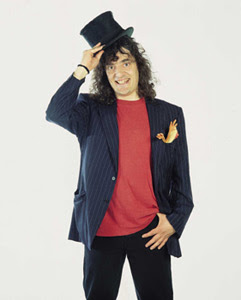 It was recently the Glasgow International Comedy Festival and so, this past Friday some work colleagues and I went to go see The Penny Dreadfuls, followed by the notorious Glaswegian comedian and magician, Jerry Sadowitz.
Jerry Sadowitz is infamous for opening his appearance at the 1991 Just For Laughs Montreal Comedy Festival, with "Hello Moosefuckers! I tell you why I hate Canada: half of you speak French, and the other half let them!" He was promptly knocked unconscious by an angry - and most likely French Canadian - member of the audience. Personally, I think it's a brilliant line.
I was warned before hand that Jerry's shows are extremely politically incorrect and to be prepared to be offended. I knew what I was getting into.
Needless to say, I WAS offended although not strictly by Jerry's routine. Yes, it was offensive and close to the bone and yes, it was extremely politically incorrect and graphic. And yet, there were moments of brilliance - especially when commenting on current world politics and war.
However, I was quite offended and made uncomfortable by Sadowitz's misogynistic rants about women. Halfway through his routine, he launched into an attack on women and how manipulative and horrible we're meant to be. It was quite upsetting. Even more shocking, however, was after Jerry spitted and ranted about what vile creatures women are, more than half the men in the audience clapped and cheered in agreement and approval. Not only did it come across as bitter and pathetic, but hateful as well. I felt like I was at some perverse Dave Sim Appreciation Society. While Jerry may have been hyperbolic for effect (although sadly, probably not), it was worsened by the men in the audience who cheered along in agreement. As I was sitting towards the front of the theatre, I felt liked turning around and giving all the misogynistic assholes the finger. Instead, I sat quietly and fanned the flames of my wrath.
Anyway, to give a minor dose of what Jerry's stand up routines are like, check out his onetime Channel 5 show, The People vs Jerry Sadowitz: check it out while you still can on Youtube.
Posted by Jennifer at 7:38 PM

Jennifer, I am afraid you have been well and truly "Sadowitzed"! The whole point of Jerry's act is to be as offensive to as many people as possible, what happens is that people laugh freely until Jerry says something that hits a raw nerve with them, it very cleverly exposes the audiances own prejudices in that they may laugh easily at racist jokes but not cancer jokes etc. It's all part of the act.I am a woman and I have known Jerry for years, he's a great guy off stage.

Anonymous, thanks but I well and truly got Sadowitz's act - hence saying I was more offended by the men in the audience than Jerry's actual comments about women.

It was interesting because when Jerry announced he was going to do a magic trick in honour of our boys in Afghanistan and Iraq, you could certainly feel the crowd tense up. And yet, when Jerry said we women are manipulative bitches, half the men in the audience agreed in cheers and applause. Jerry himself even said that his act was layers upon layers of irony.

So, I GET it. Did the half of the men in the audience who cheered along though?

Like I said, I really enjoyed his magic tricks, which were brilliant, and his political commentary (although, yes, I laughed the most about Megrahi stinking up the prison - but that's because I love toilet humour).

It really is some act, he's a genius and I'm not alone in thinking that. He's a real sweet heart off stage but he wouldn't thank me for telling you that! If you ever get the chance say hello to him and see for yourself, he's very shy and lovely really.

Ajinkya said...
This comment has been removed by a blog administrator.
5:07 AM

Yes, I'll be sure to randomly walk up to Jerry Sadowitz and say "hi" if I ever see him in person. I'm sure he would absolutely love that!

Hey, how are ya? I WAS You'reACuntByThaWay - the youtuber who put sooooo many Sadowitz vids on youtube in such a short space of time - I know "Get a fuckin' life son" I'm just sorry the big nosed old bastard had them taken down - GET A FUCKIN' LIFE SON
Sorry about all the expletives, but it is a blog about the Sadowitz boy ;) My name's Mike, aka ascampyboy, aka PsycheG - scourge of the copyright legislators MWUHAHAHA