CYCLING IN GLASGOW
I have been cycling in Glasgow for a while now and although there are lots of cycle "lanes" across the city, it seems as if the council never really gave too much thought in the planning and implementation of them. Often there are cycle lanes which will suddenly end or, as seen below, are barricaded in. What the fuck!? It's almost as bad as the prevalent sprinkling of glass that populate a lot of the lanes. 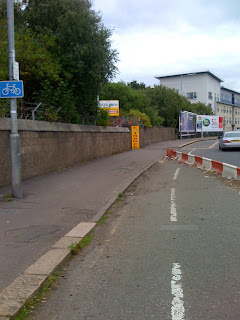 Similarly, what's the point in having bike lanes, when cars park in them, as seen below? 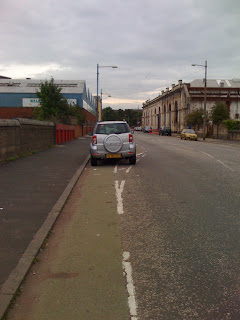 Worst of all are some drivers in Glasgow. Don't get me wrong, most drivers in Glasgow are conscientious and give me loads of cruising space on Glasgow roads. However, some drivers have been total dicks. And can I just point out that all the drivers that have raced past me, inches away from my bike, have ALL BEEN MALE? Seriously, I am a girl on a bike, casually cruising along to my destination, when suddenly some dick aggressively revs his engine before speeding past me at a ridiculous pace.
Another problem is drivers going through red lights. On average, I see about two cars a day on my commute, gunning it through red lights. In fact, a couple weeks ago while walking to work, I was actually grazed/ hit by a car that went through a red light while it was a pedestrian turn to cross. As I crossed the busy intersection, a Pakistani dude in a black Mercedes jumped the red light and turned the corner, causing me to jump out of the way. His car actually JUST nicked me but stopped in time before careening into me. Just as quickly, and realising he had hit me, he screeched his tires and peeled away. I was so shocked, I didn't have time to get his license plate but I did have time to punch the side of his car before he got away.
Also, since when do some men think it's ok to sexually harass women on bikes? What is it about the sight of a woman on a bike that stirs some men to harass us? In fact, on my commute home tonight, one Pakistani dude actually catcalled and made some weird guttural noises at me. I sneered back at me and gave him my best, "ARE YOU FUCKING KIDDING ME?" look in effort to shame him.
Also tonight, a Glaswegian dude in a car, pulled up beside me at a red light, looked me up and
down and said, "Alright, love? Been shopping?"
And I am but one example of girls on bikes being harassed.
But still, nothing beats cycling across this city on a lovely sunny day.

POST SCRIPT: This morning there was yet another article about abuse hurled at female
cyclists. The author of the article, Dawn Foster, even started a blog about her encounters as a
cyclist in London, aptly titled, 101 Wankers.
Posted by Jennifer at 9:35 PM

It's not just the girls who get traumatized. I've quit riding in Glasgow, sold the cycles, and will take it up again when I get to a civilized country.

Why? I haven't been traumatised - just perplexed about why girls on bikes seem to draw weird sexual comments that wouldn't normally be made if I were walking, for example.

Mostly I quit riding because the roads are shite combined with the fact that it was taking me as long to gear up, lock up the cycle, and change clothes as it does to walk - my journey isn't so far as yours.

But, I've also been edged off to the side of the road, been accosted by an old woman and told that I needed to learn the road rules (I was crossing with the pedestrians, and she felt that I was a vehicle, apparently). Nothing like what you've experienced, I'm sure, but ... I just got sick of the whole thing, frankly.

It's certainly not a bike friendly city.

Did you know that the most common broken bone in Glasgow is the collarbone (this from our GP)? He says it's from people cycling and having cars open their doors right in front of them.

Yeah, the roads can be totally shite in a lot of places. And I know what you mean about locks; I have two locks and takes me about 7 minutes to lock up my bike good and secure!

It's funny because I find it more bike friendly than Toronto. At least in Glasgow we have bike lanes, which is a lot more than what Toronto has. There's also a weird unspoken war between cyclists and motorists in Toronto, whereas in Glasgow, even this morning, a taxi driver pulled up beside me and told me to be careful as it was going to rain and was really lovely!

I'm not surprised about the broken collar bone. The roads are so narrow in some places and with cars whizzing past, you can't help but hug the parked cars and next thing you know, BOOM. You're doored. I'm really careful about it but yeah, I have heard about cyclists getting doored...eep!

My racing cycle was the only one which would make it up the hills, so the beach cruiser was sold early on; the racing cycle required me to wear special shoes, to clip in, so the changing clothing was the big deal there, plus lugging around the clothes, the helmet, the shoes, the lights, etc. It just ... turned it into work, and not even for a decent ride - I was cycling for maybe 10 minutes, to each destination, and spending about 25 in the whole process.

I can walk to both places in the same amount of time, and be able to take photos along the way.

For Beginners A Complete Guide To Cycling Bike Cyclato

That means when you wager over fifty one in Rams-Bengals 온라인카지노 and Matthew Stafford over 2.5 passing touchdowns, you won’t get the complete parlay payout, because of|as a outcome of} those events extra likely to|usually tend to} happen collectively. "Casino industry ramps up effort to repeal sports activities betting ban - Las Vegas Sun Newspaper". In 2011, the former world No. fifty five Austrian tennis participant, Daniel Koellerer, grew to become the first tennis participant to be banned for life for making an attempt to fix matches. The violations were outstanding between October 2009 and July 2010 after The Tennis Integrity Units had launched an investigation on behalf of the International Tennis Federation and the ATP and WTA excursions.