BACK TO THE BLOG

I hadn't meant to take a break from blogging; I've just been so busy with work and my annual trip home to Canada. I was so looking forward to getting back to Canada this time round; it's worked out in the past that I've managed to get home twice yearly however, this was the first year where I only managed to get back once. This year was also the first time - since initially moving to Scotland - that I found it really hard saying goodbye to friends and family. As Paul and I arrived at the airport, I was already sad at the prospect of having to say farewell to Toronto, my friends, my family, and Toronto's proliferous burrito restaurants.

As we checked-in for our flight back to Glasgow, I was already home sick. Perhaps it's because my life is a lot more concrete in Glasgow - my flat, my job, my social life. As a former Torontonian, I feel pretty spoiled to be able to lounge around its cafes all afternoon with friends, without worrying about getting back to my former (low-paying) job. 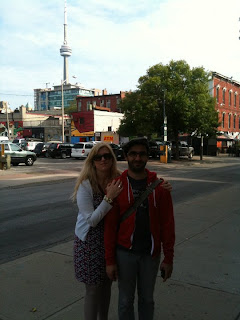 And speaking of friends, here is the best pal in the world: my Bombo. I think this was taken after Bob, Paul and I went for lunch in Kensington Market at Akram's (best falafels in Toronto); I have really missed that place. For the past three years, it's been closed due to renovations so I was thrilled to learn that it was back open for business!

While we stuffed our faces with falafels, the Canadian media personality, Sook-Yin Lee, came in with a male friend for lunch as well. Bob and I recognised her immediately (how could you not, what with the strange elfin hat that she was wearing and an inside out cardigan because she is so creative and quirky, y'all). Meanwhile Paul, the foreigner, thought she was a homeless person with mental health issues. 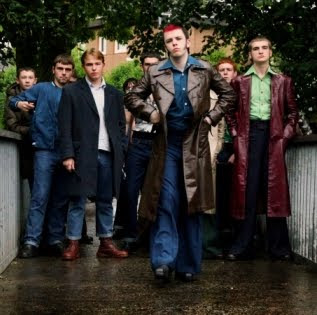 When we were in Toronto, Paul and I were lucky enough to see Peter Mullan's new film, Neds, at the Toronto International Film Festival. Set in Glasgow during the 1970s, Neds, tells the often brutal but compelling story of a sensitive and clever boy who turns into a ned (non-educated deliquint). Paul and I were bemused by the fact that the film was subtitled although, to be fair, there was quite a bit of Glaswegian slang in it. Although the film was grave and depressing, I did enjoy most of it and would recommend it. However, if you, dear blog readers, do manage to watch it, please do not be lead to believe that there are roaming packs of feral teenagers stabbing each other in the streets of Glasgow every day. Maybe just once a week. 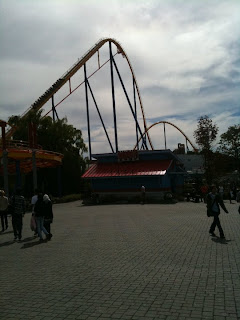 One of the highlights of the trip was going to Canada's Wonderland with Paul, Bob, and my brother. I have been wanting to go for the past four years but Paul, who was convinced he didn't like roller coasters, was reluctant. Finally, I just gave up asking him to go and booked the tickets anyway. Turns out my stubbornness was worthwhile - Paul enjoyed the "easier" roller coasters and had a good time. The roller coaster pictured above is called The Behemoth and without a doubt, it is the scariest and the most amazing ride EVER. Paul and my brother sat this one out (although my brother had been on it in the past) so it was just Bob and I who went on it. The first drop is so intense and steep, that I couldn't even scream due to the g-force.

This video doesn't even come close to doing the ride justice.

Another highlight was driving in Prince Edward County with Paul, my Mom and Grandmother for lunch at The Waring House; seeing the view (above) from Waupoos Cider Estate; and sampling the lavender and maple syrup goats cheese spread at Fifth Town Artisan Cheese (oh god, so divine...) 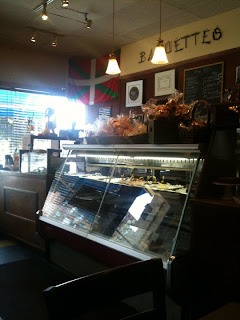 And yet another highlight - of course, to do with food - was lunch at Pain Perdu in Toronto. I have wanted to take Paul here for years but for whatever reason, we never managed to get around to it. This year, however, we managed to go NOT ONCE, but TWICE for lunch. Pain Perdu is a cute little Basque pâtisserie/ cafe on St.Clair West - which is a bit out of the way for a downtowner like myself - but it has beautiful pastries and the most amazing onion tart. Paul was quite taken with the Basque flag in the corner and their croque monsieurs. 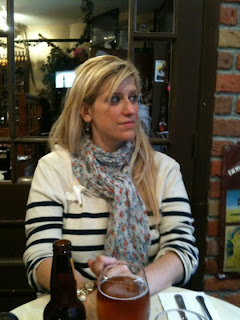 So. Originally I had booked a remote cabin (with no toilet or shower) in the very northern part of Algonquin Park for two nights. Every year, I try to show Paul different parts of Canada and thought that this year, he could experience a truly Canadian camping trip at one of Canada's most celebrated national parks. I think Paul was initially up for it - until he found out there wasn't a toilet in the cabin. And that the cabin was fairly remote. And that there could be bears and other wildlife about.

Truthfully, I wanted to book another cabin, that had a toilet (albeit, an outhouse bog) but most likely due to this aspect, that particular cabin was fully booked the entire two weeks we were in Canada. Alas, in the end, we decided to cancel and instead, booked a four star boutique hotel in Montreal for two nights. Both Paul and I love Montreal so even though we had been there two years ago, decided to go back.

We drove from Kingston, where my Mom lives, to Montreal and as soon as we arrived, found the closest cafe and ordered the delicious Quebecois beir, St Ambroise Apricot Wheat. While in Montreal, we also managed to get to Shwartz's (I had a plate of fries and pickles for dinner); Olive and Gourmando (seriously. Amazing food and coffee); and fairmount bagel (for Montreal bagels - the ONLY bagels I will eat. God, I miss them). 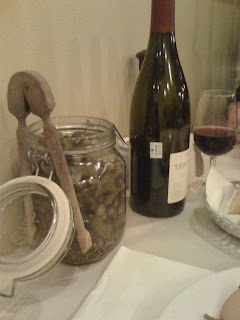 We also managed to get to L'Express for dinner - our meal was accompanied by a jar of homemade pickles: a Montreal twist with classic French bistro food. Needless to say, the food was delicious. 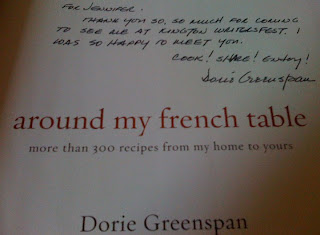 And finally, another highlight was MEETING one of my personal heroes and favourite cookbook authors, Dorie Greenspan, at the Kingston Writers Festival. In fact, Paul and I - courtesy of my Stepfather - were lucky enough to attend a brunch, partially prepared by Dorie, and to hear her speak about her career and part-time life in Paris (sigh....)

And so. Here I am, back in Glasgow, and still slightly homesick as today is Canadian Thanksgiving. I am craving pumpkin pie and autumn colours; coffee with friends; and crisp fall air.
Posted by Jennifer at 5:32 PM

You can get cans of pumpkin at Lupe Pintos on Great Western Road and I've heard rumours they have it at Waitrose, too.

I made pumpkin spice syrup (for lattes and hot chocolate) and chocolate chip pumpkin bread with mine.

Sounds like a fabulous trip! Sorry you're homesick. I know the feeling, where sometimes it's worse than others to leave.

Mmmm....pumpkin spice latte. Yeah, I have been to Lupe Pintos for the canned pumpkin in the past but this year, I have actually gotten a REAL pumpkin and I am going to make a pumpkin pie from scratch! Should be interesting!

David - it was fabulous and if you ever move to Canada, I either recommend Toronto, Kingston or Montreal (if you speak French - or even just some French)

Hmm. I speak a very wee bit of French, learned in high school. That said, though: Canada's a strong option for us. As is Norway, funnily enough ... and we neither of us speak Norwegian. :)

Jennifer said...
This comment has been removed by the author.
10:38 PM

Oh my god... Pain Perdu used to be a regular ritual for me and the boyfriend, given that my flat was at Dufferin & St. Clair. It and Patachou are both places we don't miss when we visit TO.

We're back in TO for a few days in November, so I'll have to check out Akram's... I wasn't aware they'd reopened!

Well, Norway because 1) it's out of the European Community, 2) it's very open to emigration, 3) the country itself isn't bankrupt as so many others seem to be. We figure that, as places to go, it's a good (if cold) choice.

Canada is also a strong option, though, if I can find a job. Another year from now and we'll see. :)

Snore-onto is only tolerable in small doses.

Had you stayed long enough, you'd be tempted to swim back to Glasgow.

Great(debatable) food is not enough to suffer through the traffic, over population, pollution, lack of decent jobs, snobbery, boredom, frigid winters,...

Interestingly, that list of adjectives could equally be applied to Glasgow. ;)

Anonymous - I take it you're not a fan of Toronto then. P.S. do you work at Home Depot?

David - If there one thing Glasgow isn't, it's snobby and boring. Perhaps you're thinking of Edinburgh!

Love this
I enjoy it so much
Have a nice day =)