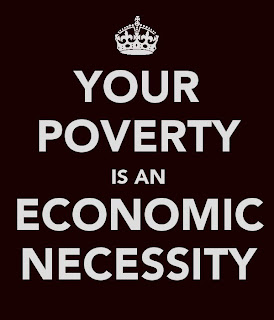 On Wednesday, the Conservative/ Liberal Democrat coalition unveiled its spending review and, in a word, it is brutal. It's so depressing, I can't even bring myself to blog about it. I feel simultaneously dejected and livid.
I am so angry at the Conservatives, who do not even have a majority in Westminster and rely on the "left wing" Liberal Democrats to prop them up, that I am no longer allowed to discuss the budget cuts with Paul lest I have an aneurysm. I'm overwhelmed with both sadness and anger because it is blatantly obvious that these cuts are going to effect the poor and most venerable in our society.
It's funny because when Paul or my friends - or, indeed, any Scottish person - talked about Margaret Thatcher and the Tories of the 1980s, everyone did so with utter contempt and I dismissed their rage as sheer hyperbole. I am used to the Canadian Conservatives and as much as I despise Stephen Harper (twat), they are but mere meekly shadows to the Tories of Britain. Turns out, they are right to hate the Tories.
I suppose I didn't give too much weight to the collective hatred of the Tories in Scotland, because I thought, "well, this is Scotland; most people, in some capacity, look out for one another". Now, it's all too clear that people do look out for one another because, historically, Westminster Conservative governments clearly did not. And now they've done it again.
Perhaps I'm naive but as I watched George Osborne, the Chancellor (i.e. the money dude), deliver his announcements, I could not believe what I was hearing. Not only were the Conservatives perpetuating the lie that they had "inherited the economic mess from Labour" and therefore had to do something, but also dismembering the country that I love. As Seumas Milne said in the Guardian:
This is to be Britain's shock therapy. It is the culmination of the Conservative project to dismantle the heart of the welfare state – or, as Osborne put it today, to "reshape" public services – that began more than 30 years ago....
So coalition leaders have used the absurd claim that the country is on the brink of bankruptcy to force through an array of sweeping changes, any one of which would normally be the focus of a prolonged political battle. It is a kind of political coup, and the result has been policymaking chaos, with a 16% cut in the BBC's budget imposed in the middle of the night and a Ministry of Defence deal that promises aircraft carriers without any actual planes.
It is women, families and the sick who, it turns out, will be picking up the bill for the bank-triggered meltdown, along with low-income teenagers and public sector workers in their millions – while Cameron and Osborne are hoping local councils will take the blame for their 30% cut, universities for the 40% bite taken out of higher education funding and local operators for the 20% cut in bus subsidies.
And when the UK's most respected economic think tank, the Institute for Fiscal Studies, announces that the poorest will suffer the most and contradicting the government's claim, you know it's serious. And when the Nobel prize winning economist, Joseph Stiglitz, writes the following, well, it's gotta be really serious:

Britain is embarking on a highly risky experiment. More likely than not, it will add one more data point to the well- established result that austerity in the midst of a downturn lowers GDP and increases unemployment, and excessive austerity can have long-lasting effects.

If Britain were wealthier, or if the prospects of success were greater, it might be a risk worth taking. But it is a gamble with almost no potential upside. Austerity is a gamble which Britain can ill afford.

It's just all too depressing really. Yet, as downtrodden and angry as I feel, I know that I simply cannot accept these measures; anyone with heart or conscious wouldn't. I'm not really sure what I can do to be honest but it's a start.
Posted by Jennifer at 9:02 PM

I hear you. I think that, based upon some of these changes, we're going to keep on looking for interesting places to stay other than the US or the UK.

How's Canada holding up through all of this?