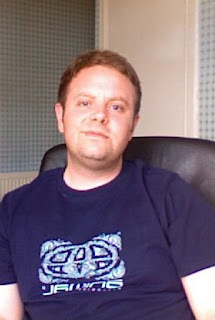 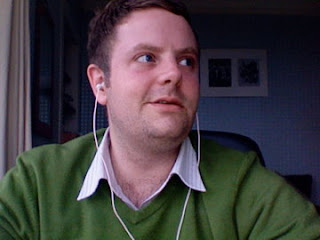 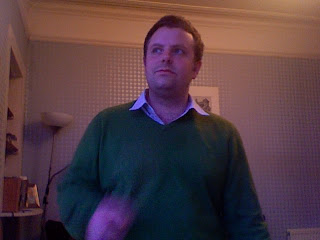 Strathclyde Police is appealing for the assistance of the media and the public in a bid to trace a 30 year-old man who has been missing since Saturday 20 November 2010.

Gavin Fern (30) was last seen by his flatmate leaving his home address in, Battlefield at around 1200 hours on Saturday afternoon.

Family and police are becoming increasingly concerned for his safety and wellbeing as he has not been seen or heard from since.

Gavin is described as white, 5ft 6 in height, of stocky build, with short brown hair, blue eyes, clean shaven and a fair complexion. When last seen he was wearing a long, grey winter coat and a scarf.

Sergeant Lynda McGowan is appealing for any information that will assist police in tracing Gavin. Speaking from Cathcart Police Office, she said:

“Despite an extensive search by officers we have so far been unable to trace Gavin. It is extremely out of character for him to go missing and all of his friends and family are becoming increasingly anxious as time goes on, particularly as he has medical issues and is not believed to have taken his medication with him.

“Our enquiries have revealed that Gavin used a bank machine in Central Station in city centre on Saturday afternoon, however, we do not know if he then boarded a train. I would therefore appeal to anyone who can shed any light on his current whereabouts, or anyone who may be aware of his movements since Saturday 20 November, to contact us as a matter of urgency. We need to know that Gavin is safe and well.”

Anyone with information is asked to contact officers at Cathcart Police Office on 0141 532 4900 or contact their local police office.

I don't think the British public fully understand their own immigration system and really, why should they? They were born here and consequently, don't need to carefully read visa applications or be interviewed and fingerprinted or pay thousands of pounds to only have their said visa application denied because they entered the wrong address. I mean, why else would some of the British public applaud the coalition government's announcement today that they are capping immigrants to the UK from outside the European Union to only 21,700 from next year. Either they don't understand their own policies or they're just dicks.
Do people not realise that this feckless announcement is an attempt to appease the xenophobic voters amongst us? Surely most people understand that limiting immigrants from outside the EU to an arbitrary number won't solve societies woes? I KNOW the British people are intelligent enough to decipher that much, right?
Yet, I cannot fathom why the Conservative/ Liberal Democrat government wants to limit the amount of highly skilled workers coming to the UK - beyond the obvious reasons of pacifying the more right wing voters of this country. When even Chief Executives in London warn that such a cap will only damage UK businesses, you know it's a pointless affair; surely Britain wants to attract the best and brightest scientists, architects, professors, artists, performers and so on?! Surely we want to attract such people who would earn high salaries usually associated with such highly skilled jobs and would, in turn, pay high taxes!?
Honestly, it really makes me angry and lose faith in the British public; how can some people fall foul to such empty political acts?!
However, it isn't the highly skilled workers who will lose out - it's international students. You know, the ones who pay THOUSANDS OF POUNDS each year to attend prestigious British schools? Work related migration to the UK accounts for only 20% of the overall reduction needed for the government to reach the target of 21,700 - meaning non-EU students will need to make up 60% of the cut, with the final 20% coming from family visas and their dependents.
This is but a short-sighted policy that puts economic growth and recovery at risk. And indeed, I would argue that most politicians know this and in fact, that immigration brings benefits to our economy and society. As an immigrant myself, I KNOW this first hand. Governments know this as well but fail to argue as much and instead, pander to the right-wing media and voters.
And if you might think I'm wrong, take my home country of Canada as an example: Canada has a fairly broad immigration policy and is a very multicultural country and proudly so. In 2008, there was over 270, 000 immigrants to Canada and considering the population of Canada is only 34 million, that's quite a substantial number.
So, if this immigration cap isn't really about xenophobia, then what's it all about? Because all of the evidence leads me to believe as much.
Posted by Jennifer at 8:31 PM 11 comments: 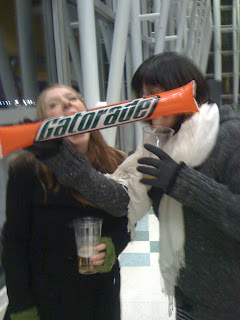 On Saturday night, I took my Scottish friends, Lauren (left) and Erica (right), to their first hockey game: the Braehead Clan vs. Sheffield Steelers. Clearly they approved of being able to watch an organised sport - albeit a completely foreign one to them - and drink beer at the same time. Don't worry; we made sure we were there on time and in our seats for the face off lest we START A FUCKING RIOT. 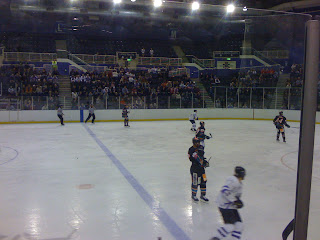 During the first period, the Clan were really on form and were leading the game 2 -0. Perhaps naively, I assumed that the Clan were definitely on their way for an easy victory. During the second period however, the Steelers seemed to have regrouped and proceeded to tie the game. They eventually won, 5-2. A wee shame, as they say here, but then again, this is the Clan's first season so it's important to keep that in mind. 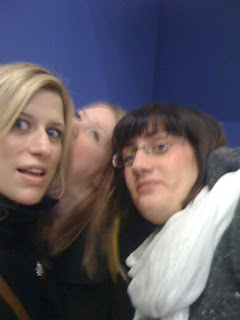 On our way to becoming the charming and ladylike drunks that we are... 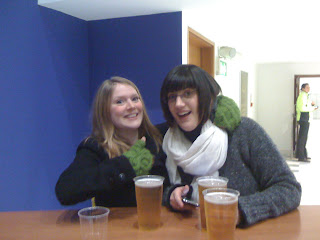 I tried to play the good Canadian host and answer all of Lauren and Erica's questions like, "why do they keep changing players?", "how do they know when to get off the ice and change players?", "why does the referee keep blowing the whistle?", "where's the puck?" and "what's going on?!" I had a hard time trying to explain icing and offside. 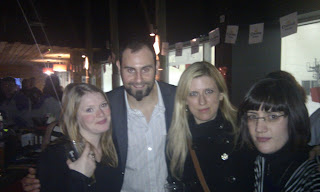 After the game, we headed over to the Sno Bar for even more beer. Some of the hockey players were there and we got to chatting to Mathieu Wathier - a fellow Canadian! Well, French Canadian. Rather embarrassingly, I mistook him for the other French Canadian on the team: Cedric Bernier. Nevertheless, I promise I am not turning into a puck bunny (which, I think, is a somewhat sexist term: girls are allowed to like hockey too!) I'm always curious to hear what other Canadians think about living in Scotland and more importantly, what sort of visa they have. It was also nice to just talk hockey to other fans; what a luxury to not talk about football for ONE day!
Lauren and Erica enjoyed the game and said they would definitely go back. My plan of brainwashing them into enjoying hockey, seems to have taken hold although it may be due to the beer more than anything.
Posted by Jennifer at 9:07 PM No comments:

The Best Game You Can Name
How amazing is this?! Hockey. IN SCOTLAND!

The Braehead Clan are the newest hockey team in the Elite "Ice hockey" League in the UK and a mere 10 minute car ride from my flat! Even better, the majority of the players are Canadian! It's like a wee bit of home, here in Glasgow.

I'm embarrassed to admit that I didn't even know that a new hockey team was launched in October; what kind of Canadian am I?! Nevertheless, I was lucky enough to get four complimentary tickets to the game this past Saturday night where the Clan took on the League Champions, the Coventry Blazes. 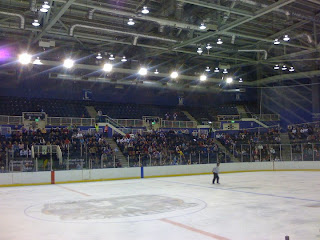 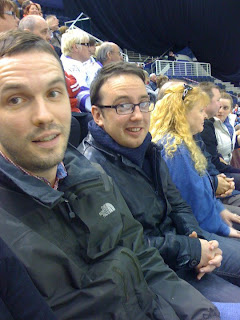 I invited my Scottish friends, Jamie and Claire, to come along to experience their first ever hockey game. Paul has already been to a hockey game, two years ago, while we were back in Canada (Toronto Maple Leafs vs. Anaheim Ducks; the Leafs lost of course). 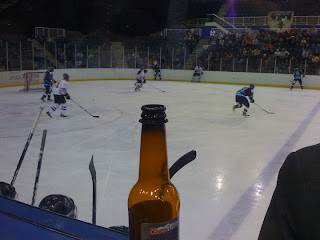 Everyone liked the fact that you could have a drink while watching the game. 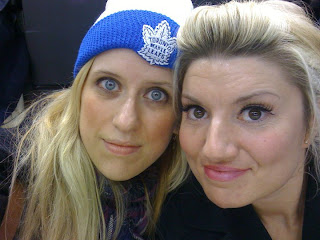 I'm such a stereotypical Canadian, that I had to wear my Toronto Maple Leafs toque to the game. Claire is now a hockey convert - although I suspect she just approved of having a beer whilst watching butch men skate about the ice. 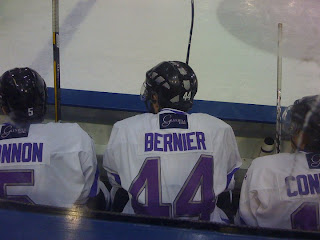 Our seats were right behind the Clan box. Cedric Bernier (French Canadian, obviously) is apparently the Clan's "enforcer". 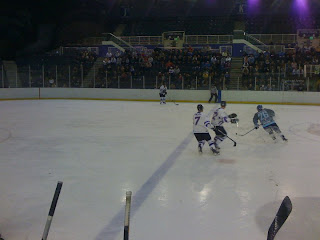 It was a really exciting game - the Blazes initially had one goal and the Clan managed to tie the game in the third period with only seconds to go. 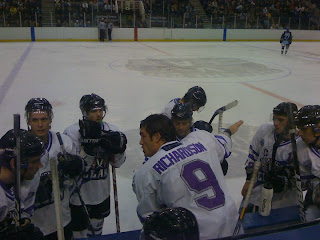 Head Coach and forward, Bruce Richardson, taking a time out to discuss strategy to the team. Is it weird for the Head Coach to also play in actual games? Or is it just me?

Anyway, the game went into an extra period (of five minutes), but even after that, it was still tied. So, the game went into a shootout. Personally, I find shootouts brutal and nerve wracking - especially after the notorious shootout in Nagano in 1998 (I can't bear to see the Great One upset).

Sadly, the Clan lost in the shootout, but it was still a great game especially considering how new a team the Clan are. 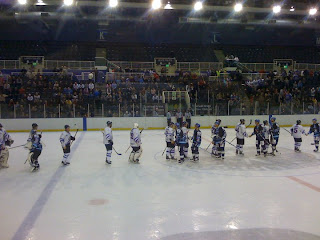 Overall, it was a great night and I can't wait to go back to another game. On a different note, I have to admit - there is definitely a difference between a Canadian and Scottish crowd.

Two years ago, at the Toronto Maple Leafs game, most of the spectators were quiet and indeed, you could clearly hear the grunts and shouts of the players on the ice - it was THAT quiet. Sure, when there was a goal or the beginnings of a fight, the Canadian spectators would start to get a bit rowdy but otherwise, they would watch the game in silence. The Scottish crowd on Saturday night, however, were anything but quiet. Throughout most of the match, people (mostly women, for some strange reason), would shout, "SMAAAAAAAASH HIM!" or "COME ON, BOYS!". The odd occasion, a dude would shout at the referee and call them BY FIRST NAME!?

In fact, Paul and my friends got shouted at because they took to their seats three minutes into the game. As I myself am mental, I rushed ahead of Paul, Jamie and Claire to find our seats and sat down while they lingered behind. While Paul and my friends proceeded to join me in our seats, apparently some older woman - dressed as a vampire - shouted at Paul for daring to take his seat while the game was in action (you're supposed to wait until the end of the period to move about - maybe if it's a fucking NHL game: aye, maybe then, but at a dinky arena?! No offense). Paul told her to "gies peace" (Scots for "give us peace", "piss off").

I think if I had heard her, I would have told her to "Get tae; it's not as if Bobby Orr himself is out there playin'!"