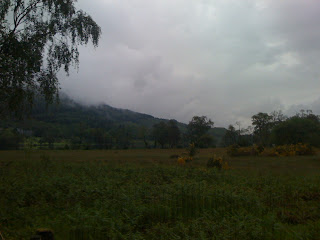 Oh, god, those clouds...but the scenery cannae be beat! 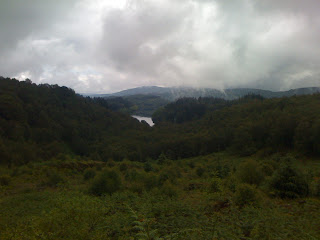 View from atop Dukes Pass
Yesterday, I took part in the annual Trossachs Ton - a bike ride of either 100km or 100miles through the beautiful Trossachs in Scotland. As I'm still a bit of a cycling newbie, I opted for the 100km route and as soon as I crossed the finish line - although relieved - I sort of regretted not signing up to do the 100miles. Och, well. Next year. Besides, as soon as I finished, it started pouring rain.
It was a beautiful ride - complete with a gruelling (well, for me anyway) climb smack in the middle of the Trossachs: Dukes Pass. It was a slog, but what a view from the top!
Despite the weather (usual Scottish mist and drizzle), it was an amazing day. The only downfall was the last 30km, cycling into Stirling on a busy road and almost being hit by a bus. Oh, and some dude in an Audi making "wanker" signs at me; maybe it was my Euskastel-Euskadi jersey that he objected to? Or maybe he objected to a mouthy blonde who dared to take up space on the road? I'm not sure. It got me thinking though: maybe the reason why some motorists/ drivers who proclaim to "hate cyclists" is not because we're inherently cool and more awesome than most, but because we cyclists remind them that they're lazy and dependent on a car culture that enables said laziness? Either way, after almost being run off the road and violated with lame lewd actions by motorists, I've realised that cycling can not also make you superior, but a misanthrope too. Can you tell? Seriously, why the hate though? Why do some drivers whizz past us cyclists at not only incredible speed, but so close as well? Is it really worth taking a life to prove how much of a dick you are?
Nevertheless, what a way to see Scotland. Without a doubt.
Posted by Jennifer at 10:42 PM

I've biked and driven in both cities and rural areas in BC.

The only problem I've had with bikers is on single lane highways with no bike lane. Most of them are okay but every now and then you get an obnoxious biker in the middle of your lane and you've got to cross a double solid line to go around them. On windy mountain roads this is very dangerous.

I've always assumed the people who hate bikers lump us all together as road hogs.