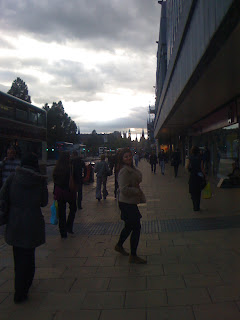 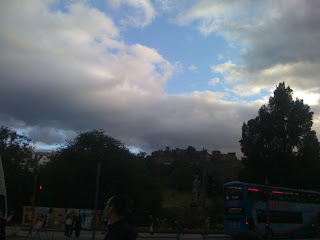 I had an epic weekend (ohhhhh guuurl, that is another story) however, today Claire and I went to Edinburgh for lunch, dinner and a spot of theatre. We went to Ruby Wax's, Losing It, as it was the last day of the show at the Edinburgh Fringe Festival. Despite living in Scotland for the last five years, today was my first time at the Fringe. People are surprised when I tell them that I've never been to any festival - ever - in Edinburgh. "Jennifer, you've never been to the Festival?! Why?!" they ask, pulling a concerned face.

BECAUSE IT IS HELL OF EARTH. OHMIFUCKINGGAWD.

Tourists, people handing out flyers, media-types, tv-types, tourists, more tourists, kitschy Scottish overpriced crap, £2.50 for a cup of coffee, TOURISTS IN FANNY PACKS (bum bags), students having animated conversations about "conceptional performance art" in confined spaces and me amidst all the chaos, feeling like a walking mental illness.

So, in a way, I guess it was fitting that Claire and I went to the see Losing It, a musical theatre performance about mental illness and well, losing it.

It was a touching, haunting, brilliant and honest performance. And in some respects, it was quite close to home.

After the play, we went for some dinner in Auld Reekie, before getting the train back to Glasgow. Whilst we were on the train, Claire and I - as usual - were making each other howl with laughter and causing a scene. I seriously had to stop myself from laughing so much as I was beginning to think that I would be met at Queen Street Train Station, by men in white uniforms and be handcuffed to a stretcher, before being wheeled away. "Ohhhh, honey," I said to Claire, "I ain't far off from that....."
Posted by Jennifer at 10:55 PM

I've been here a few weeks shy of 7 years and never been to Fringe. I dreaded meetings in Edinburgh during the festival ugh.