Nothing is Black and White 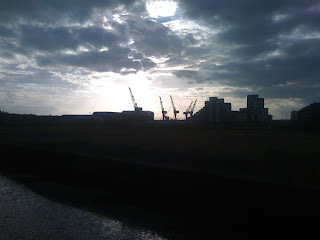 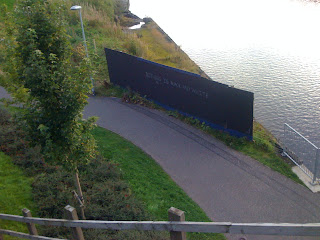 One of the things that I love about being back in the west end again, is that I can walk pretty much anywhere in the city - that is, if I'm not riding my bike. This past week, I've been doing a lot of walking - whether it be going into town to meet friends or to work and back. Weather wise, it hasn't been too bad a week. It's been great to just walk for long periods of time, listening to music, taking in the sights of my beloved adopted city and of course, letting my thoughts tick over (and over and over and over).
As I mentioned in my previous post, I've been slowly re-adjusting to who I am (or maybe who I was?), since leaving my ex-boyfriend in January. It's so strange (and refreshing!) after four years of being with someone in a foreign country, to be all on your own again. The thing is though, I moved here on my own - without a job, apartment or boyfriend - so I KNOW that I can manage. However, it's what happens between then and the "managing" bit that you can't really prepare for; because no matter how strong you think you are, you just DON'T KNOW. You just don't know how you will cope or (re)adjust and that's what makes us who we are, I suppose.
Something that I've come to realise is that I've been in mourning for what could have been. Despite all the horrible things that happened with my ex, on some level I was saddened by the failure of our relationship. Or rather, I was saddened by the potential of it all: his potential, the potential of us and what could have been. And that's what - perhaps- upsets me the most: the potential of what could have been.
Even with G, I think I've been more upset about what COULD have been then what was.
I want to see the good in everything and believe it or not, I would describe myself as an eternal optimist. Nevertheless, I always seem to try and talk myself back from the ledge of positivism - which, more than likely, is probably to do with self-esteem and self-believe (yeah, I know, psychobabble. Sorry.) More than ever now though, I find myself torn between two realms: what I want and what I need. I guess that's what it means to be an adult, huh?

“I am glad that I paid so little attention to good advice; had I abided by it I might have been saved from some of my most valuable mistakes.”
Edna St. Vincent Millay quotes (American poet and dramatist, 1892-1950)

My name is Frida and I just moved to Glasgow about a month ago from Sweden. Before I moved here I was searching the web for blogs about Glasgow and came across yours. I have followed it ever since and just wanted to say that I really enjoy reading about your life and experiences in Glasgow. Both cause I can take tips from what you are doing but mostly cause you write really good and funny!

Keep up the good work!

Thanks very much and glad someone besides my Mom enjoys it! My god - Sweden to Glasgow?! WHY? I've never been to Sweden but it's meant to be amazing! Anyway, welcome to Glasgow!

Thank you very much! I am starting to get a good vibe of the city so far. Just need to find a job. Where did you turn to for work when you just arrived here? Did you contact companys or go thrue a agency?

Well, during my time as an exchange student in Slovenia 2009 I fell in love in a scottish guy and here we are! :-)

Glad you're settling in; I hope you're liking it here? Wow, that must be real love if you moved from Sweden to Scotland!? Sweden - one of the most progressive countries in the world!

When I first got here, I worked as a barista pulling coffee shots in a cafe. I lasted a couple weeks before I got something else. I registered with agencies and that's how I got my first job, working as an assistant to a super rich dude.

So, I would register with an agency and then also just apply on your own via job sites. I take it you have a degree already? Are you focusing on one field in particular?

I have a degree in Tourism and right now I am actually studying from a swedish Uni where all my classes are online. I worked at the reception in a hotel when I was still in Sweden but honestly, I feel a bit done with that! :-)

You know what, do you wanna meet some night over a coffee or a beer or whisky? I am not picky! I will absolutly not be offended if you say no, and I will not stop reading your blog either. I just thought it would be fun to have a chat with someone who were in the same position as I am now (well, sort of)not long ago.

Beer sounds ace - happy to help anyway I can. Send me an email: Jennifer@idreamofhaggis.com