WEEKEND IN PICTURES
Oh, god. I don't even know how I am still alive after this past weekend. Even worse, I'm not sure whether I'll be able to ever drink whisky again. Well, I say that now; give me a week. 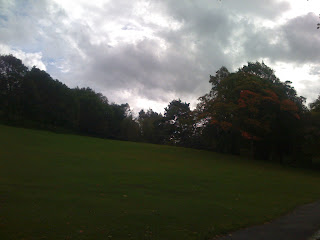 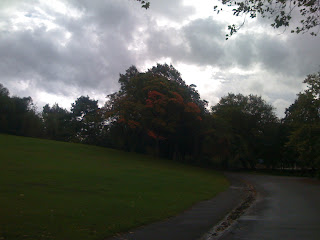 On Saturday morning, I went for a run through Kelvingrove Park and noticed that the leaves have started changing colours. Alas. It's the end of summer, isn't it? Although I do love this time of year, it always makes me homesick. In fact, it's often this time of year that I head back home to Canada for my annual visit. Sadly, not this year. Although I do hope to be home for Christmas - the first time in four years! 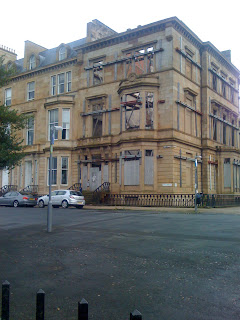 And here stands the sad empty shell of 18 Park Terrace, where I lived as an exchange student whilst studying at Glasgow University in 1999 - 2000. What a beautiful building it was. 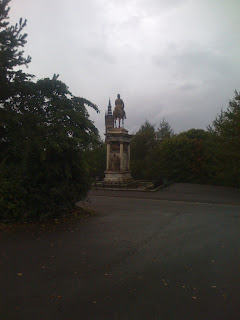 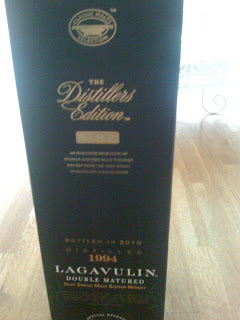 Saturday night, my friend Erica hosted a whisky tasting night at her home in Lennoxtown. Well, I say "whisky tasting" but really, it was just an excuse to drink ridiculously good whisky. And for those that didn't like whisky (if you can believe it!) there was awesome rum (courtesy of South African John) or beer. Or gin. Basically, there was a lot of alcohol. And even MORE whisky. Pictured above was my contribution.
Oh. My. God. Heaven in a bottle.
As I mentioned, my friend Erica (whose husband, Mike, is in Jakarta on business), lives in Lennoxtown, which is about 21km from my house. And because I am mentally ill (for the time being, anyway) I decided to cycle out to her house. On my bike. With an overnight bag and £65 bottle of whisky on my back.
Although it was a beautiful ride out to Erica's late Saturday afternoon, I hadn't really thought out my plan. I didn't consider that I might be hung over the next day (to be honest, I wasn't really planning on drinking that much whisky) nor did I even bother to look at the weather reports for Sunday; this is Scotland - I just assume that it will rain EVERY DAY. No, I am not being hyperbolic. 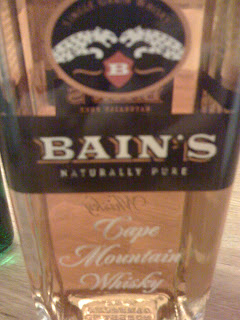 So, Saturday night was going great: great chat, even greater friends and as usual, Tim was holding court and making us all laugh. And then South African John pulled this whisky out of his bag. A South African single grain whisky. Who knew? Anyway, I had one taste and damn, that was it. It's very caramel-y, with hints of vanilla. Doesn't that sound amazing? Well, it was. So of course, I had to drink A LOT of it. The thing is, with whisky, I always feel fine and completely sober and then I'm suddenly paraplegic and I've lost my pants (trousers). What happened?! 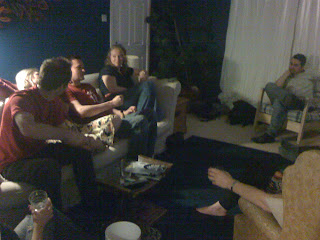 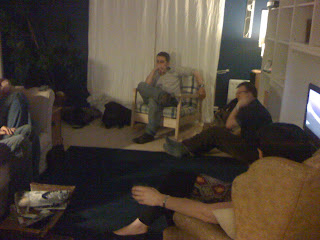 Great chat; great pals. I wish I had taken an "After" picture. There was dancing, iPod wars, Motown, drunken tweeting and the ubiquitous playing of Deacon Blue's, Dignity (apparently there is a Glaswegian tradition to play this song at the end of the night?)
I don't even know how I managed to get to bed. When I woke up in the morning, I could barely move. I came downstairs to find blood on the staircase, Erica had lost her vision (somewhat scary), and there were numerous incidences of people being sick. Oh, god. 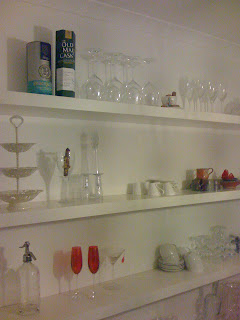 How nice is Mike and Erica's house? It's lovely. Too bad she allowed all us filthy animals to stay overnight. 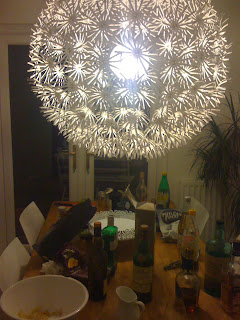 This is serious damage.
As I said, I woke on Sunday morning and I could barely move. Why?! How?! I swear, I only had a few drams of whisky! And where are MY PANTS!?
And then I remembered I had to cycle home.
I managed to get up and eat some toast but promptly had to go back to bed. As did Erica. I'm not sure where the rest of my friends went but when I came back downstairs at 5.00pm, everyone had gone. Except Erica, of course, because she lives there. She was awake though and surprised to still see me in my pajamas. In her house. At 5.00pm.
I looked outside and of course, it was pissing down with rain and the wind was howling. Of course. OF COURSE! However, I had no other option but to cycle home. Hungover to epic proportions and in the howling wind and rain. I suppose I could have taken the bus but really, I've come this far, haven't I? What's another 1 hour and 15 minutes of torture and dry-heavin' in the freezing rain, coughing up god knows what between fits of dizzy spells along the side of the road as asshole drivers whizz past at alarming speeds!? Bring it, I say.
And so, I set off at around 6.00pm and cycled home, shamefully at a snail's pace lest I fainted, in the wind and rain. And when I got home just after 7.00pm, I vowed to never EVER drink more than two units of booze in one night ever again. Who knows if I will stick to that or not.
More importantly however, I can safely say that my ride home last night was the most miserable and sad experiences of my life thus far and if that doesn't swear me off guzzling gallons of liquor again, well, I'm more mentally ill than I thought.
Posted by Jennifer at 10:05 PM

Why isn't this in the "I am Canadian" ads?

Now THAT is funny! I'm sure you've similar experiences in Belgium?!