WEEKEND IN PICTURES
Firstly. And most importantly. I passed! I passed your stupid Life in the UK Test!
I took the test on Thursday morning and after showing documentation, ID and confirming my birth date and address, I was escorted to a computer where I - once again - had to show my passport and photo ID to another UK Border agent. I was then informed that if I ever discussed the Life in the UK test after sitting it, I would be immediately disqualified. I replied, "like ever? I can't talk about it EVER?" Mouth agape; eyes widened. HOW WOULD THEY EVER KNOW?!
"Yes, I suppose not ever," the UK Border agent replied.
Woah. That is some serious shit right there.
Needless to say, all those long nights of memorising dates, figures, and percentages paid off because I passed! Do I feel anymore "British" for knowing that 8% of children in the UK attend independent schools? No, I do not. However, I have now been granted the right to pay £870 and start my application for Indefinite Leave to Remain in the UK. That means that I can live here for like, EVER!
So, it's Halloween today and that means most kids in the UK tonight, are becoming more and more Americanised. Er, sorry, no. I mean, most kids in the UK tonight went trick or treating or "guising", if you're lucky enough to live in Scotland (I am!)
On Saturday, my friend Robert and his wife, Claire, had a Halloween party. After the initial feasting of homemade pumpkin soup, I proceeded to eat pretty much an ENTIRE bowl of Robert's homemade salsa. It was AMAZING salsa (obviously) however, I was left an aching stomach afterwards. I guess it's a bad idea to eat spicy salsa and little else after cycling 25miles around the outer skirts of Glasgow.
Speaking of which, I went for a cycle on Saturday morning out to Lennoxtown where I discovered an amazing bike store/place called, Wheelcraft. It's run by a lovely man called "Big Al" who is renowned for his handmade bike wheels. We (my bike group and I) rolled up and Al was so lovely and friendly, he offered us all free coffee and cookies. While I chatted away to Al about Canada, I couldn't help but notice another cyclist sitting quietly in the shop, fixing his bike wheel. While Al and I discussed Canada and our mutual disgust for instant coffee (if I come to your house and that's all you have to offer, don't bother. There are few things in life I am snobby about but coffee is one of them. Sure, I dig Tim Hortons but I draw the line there), the quiet cyclist continued to fix his bike wheel, barely even bothering to look up from his work. I wish I was cool enough to say that his dashing and handsome looks barely phased me but to be honest, I'm not. And of course, being the mature adult that I am, I pretty much ignored the hot cyclist and avoided all eye contact with him.
(By the way, apparently his name is Philip and I wish I had paid more attention to what kind of bike he was riding but you know, avoidance of him and all that...)
Right, Halloween party. Too much salsa. Lots of dancing to Prince (of course) and The Smiths. 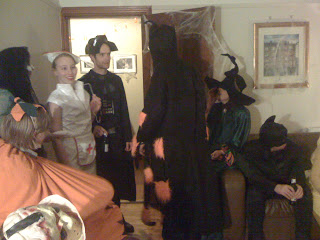 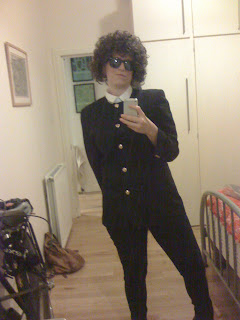 Can you guess who I went as? 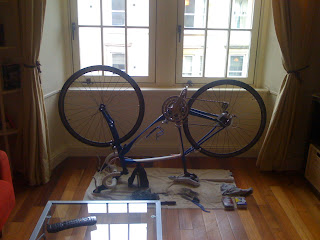 This past weekend I decided that I am pretty much a bike goddess (sorry, but it's true) and finally got around to cleaning and tweaking my bike. For some ridiculous reason, I also decided that it was a good idea to clean my bike IN MY BATHTUB. I think I spent more time degreasing my tub and porcelain than my actual bike. Ugh, the one drawback of living in a tenement (apartment) building on the top floor; where the hell are you meant to obsessively scrub and hose down your bike and chain?! 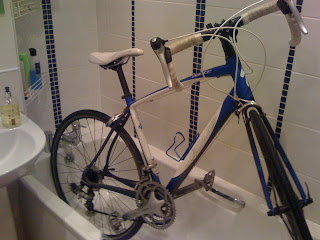 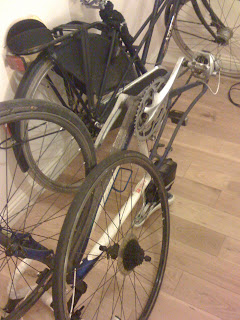 I've also pretty much mastered changing my own inner tube after getting two punctures this past weekend. Also? my expensive handmade German Continental Grand Prix 4000 back wheel has a big ol' gash in it. Despite the fact that I only bought the wheels in July, I'm gonna have to buy a new one because it is FUBAR, y'all. Goddamn.
Posted by Jennifer at 10:32 PM

Congrats on passing your test! And sorry to hear about your new bike wheels! By the way, that last picture you posted, what kind of bike is that black one with the fenders! I love it, that's the kind of bike I'd like :) I get made fun of but meh, it's for me not them. Casual rider with kids, that's me :)

It's great! I absolutely love it. It's sturdy, reliable and you can literally get on it with dress and heels and go. Azor bikes aren't cheap but you get what you pay for - you can buy a cheap bike from Canadian Tire that will last for a couple months before starting to fall apart, or you can invest in a good-quality bike. I guess it depends on how serious you intend to cruise around the hood.

Anyway, I would recommend a Pashley - they're English bikes and of excellent quality : http://www.curbside.on.ca/blog/archives/81