WEEKEND IN PICTURES
While there was a heatwave in London this past weekend, true to form Glasgow maintained the status quo and continued to dump drizzly humid rain on its inhabitants.
After work on Friday, some colleagues and I decided to get a pint at the new(ish) bar, BrewDog. While BrewDog do indeed brew some decent beer, the interiors of the pub (bar?) always leave me feeling unsure of its intentions; I never know whether I'm meant to feel as if I'm in a Swiss chalet (no, not THE Canadian chain restaurant) or an upmarket student-y type drinking establishment? Or maybe that's just my own Canadian confusion - I always feel like I want to go snowboarding after sitting amongst the woody interiors.
Anyway. Of course one pint turned into two and then three and then a work colleague and I went for dinner. We walked further along to Partick and went to what is quickly becoming my "local" - Criterion - for some grub. (Side Note/ Appreciation: I really like Criterion - it's never too busy that you can't get a seat; the food is good and not overly priced (it has a great three course lunch menu); and they always seem to play Prince at some point in the evening. )
After dinner, I walked my friend/ work colleague home to her house in Dowanhill. Although she has lived there for a few months now, I felt uneasy letting her walk home alone. Being gangsta' and living in Partick myself, I felt more comfortable walking her home and then walking back alone (besides, people don't mess with me; guess they take one look at me and realise I'm not "right").
So, after departing from my friend's, I started walking down her street back to Partick. As I strolled past one huge flat on the prominent street, a couple guys were sitting in the windowsill, drinking beer. Walking past, they called to me and in usual fashion, asked how my night was. And in my usual fashion, I grunted a response and continued on. Before stopping in my tracks.
Now, being the nosey bitch I am, I (of course) scanned the inside of their flat and spotted a fierce looking road bike leaning against the wall in the living room. I asked whose bike it was and one of the dudes in the window replied it was his. And so we got to chatting about cycling (what kind of bike he had, what kind of bike I had, where we went cycling, and so on). Eventually they invited me to their massive flat but I declined. Instead, I stood on the sidewalk for another 15 minutes chatting, before I asked if I could use their washroom (WHAT?! I really needed to pee?!) One of the dudes in the window jumped up and went through their massive flat before arriving at their front door about five minutes later and ushered me into their living room.
The Cute Cyclist met me in his living room and showed me downstairs to their washroom - which had a bidet (so Euro! I'm so easily impressed!) Weird.
Afterwards, Cute Cyclist and I talked some more and he introduced me to his cat, which he had rescued a couple months ago. Well. Be still my cat-loving, bike-riding heart! We chatted some more before he asked to kiss me. Now, I don't really make a habit of gatecrashing parties in the west end nor - despite appearances - do I make it a habit of kissing (nearly) random dudes. So, I declined. Which isn't to say I'm not interested - and I told him as much - I just didn't feel like kissing someone whom I LITERALLY met on the street and whose washroom I just barged into.
Nevertheless, we chatted some more and I realised, "hang on a minute, he looks kinda young," so I asked Cute Cyclist how old he was.
"Twenty-six", he cheerfully replied.
Gulp.
"Huh. I'm Thirty-two", I offered.
Cute Cyclist just smiled blankly at me. He shrugged. "you don't look it".
"Well, I certainly don't act it either!!!!" I almost screamed like a maniac.
We stood there for a minute before I announced I was leaving (god, I'm such a weirdo). As he opened his palatial front door, I realised it was now raining (OF COURSE). I asked Cute Cyclist if I could borrow an umbrella. "Oh," he said, looking at the floor, "I don't have one."
WHAAAAAAAT? THIS IS GLASGOW???!!!
"Yeah, I know. I'm a guy, I guess. Wait a minute. I have a jacket you can borrow!" He said, before he dashed off.
So, that is how I ended up borrowing a stranger's rain jacket, using his washroom and then exchanging numbers with a twenty-six year old whose name is the most poshest thing I've ever heard. We'll see.
Saturday night, I went to what is quickly becoming another ritual: (ice) hockey with girlfriends! 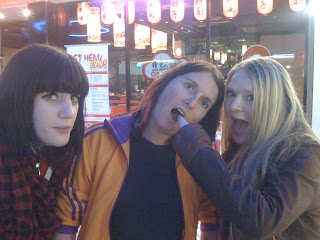 Left to right: Erica, who loves body checking and the sound of flesh hitting glass panels; Linzi (who was attending for the first time ever and reassured me she understood the rules because she "had seen, The Mighty Ducks" film); and Lauren. Pure reprobates, man. 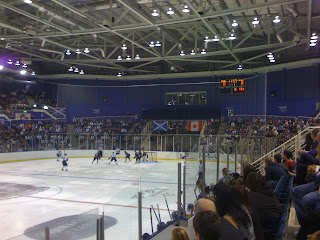 The Braehead Clan vs. Cardiff Devils. The Clan won: 3-1! As someone with immediate Welsh connections (my Grandmother is from Cardiff), I almost felt obliged to support Cardiff. Eh, who cares? Almost all the players are Canadian on both teams anyway. 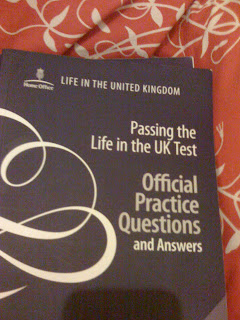 Speaking of Welsh grandparents, here's what I will be studying for the next wee while: the Life in the UK test book! Yep, because knowing what percentage of the British population are Roman Catholic (Answer: 10%), is what it means to be British and to have assimilated into British society.
I am going to be applying for Indefinite Leave to Remain (Settlement) soon so in order to do so, I need to sit a test that was created to appease knee-jerk reactionary racist bastards who mostly inhabitant middle and southern England so they didn't feel like this country was letting just anyone in. Oh, sorry. I meant, to help assimilate immigrants into the fabric of British culture and society. Aye, that. 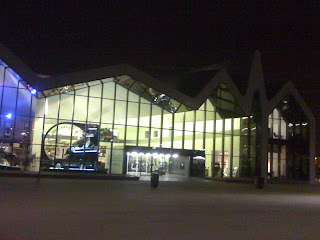 Cycled past the new Transport Museum on the Clyde late at night. It was warm outside and so quiet. What a sight. 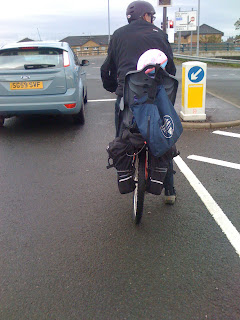 And here's another sight I saw this past week - something I don't usually see! Someone commuting their baby/ child to daycare ON A BIKE!!! Woah, you would almost think WE WERE IN EUROPE, Y'ALL!!
Seriously. It was a lovely sight and you know what? He totally smoked my ass! Respect.
Posted by Jennifer at 10:41 PM

There are so many things in this post that are just gold.

1. love this post
2. you will smoke the life in uk test - just read through the practice questions and you'll be fine.