It's Been a Long, Long, Long Time Running/ It's Well Worth The Wait
What a beautiful (and all too rare) weekend in Glasgow; both yesterday and today were those sunny, crisp but cool winter days that are so commonplace, back in Toronto. I love those bright and cold winter days where you finally pull your scarf, gloves and tuque out of storage and bundle up before heading outside.
Yesterday my friend, Claire, and I had every intention of setting off early to cycle along the Kelvin river to Bowling. I arrived at Claire's flat in Queen's Cross in the morning and after adjusting Claire's bike and a strong cup of coffee, we headed off into the sunny winter day. Not even 15 minutes into our ride along the canal and I got the Dreaded But All Too Ubiquitous Back Wheel Puncture.
For the last two weeks, you see, I have been riding around with a large gash in my back wheel - which most likely occurred whilst I cycled through the Clyde Tunnel (a.k.a. Rape City) early one morning on my way to an appointment. As such, I've had to do about 3 puncture repairs in the last two weeks, as stray pebbles and broken glass (which seem to proliferate the streets of Glasgow), worked their way through the huge slash in my tire and pop my inner tube. Luckily we were only in Maryhill, so we pushed our bikes all the way along Byres Road - where I spotted Grant Morrison (the famous Scottish comic book writer) and his wife - to West End Cycles, where I finally caved and got a brand-new back wheel tire right then and there (normally I'd buy such a thing online). The dude in West End Cycles was so nice - not to mention knowledgeable - and swapped my back tire in a mere 5 minutes. Unbelievable.
And then we were off! As we made our way back to the canal, Claire took me on a cycling tour of the area she grew up in (Knightswood) and regaled me with hilarious stories from her childhood.
As we cycled along the canal pathway to Clydebank - avoiding the pot holes - I couldn't help but feel optimistic; cycling in Glasgow (and to an extent, Scotland) has such potential! If Glasgow Council only invested a little bit more and took more of an initiative into creating proper cycling infrastructure within the city, we could have such great cycling routes - and not just token second-class cycle paths. It is entirely possible to cycle to grocery store (as Claire and I did) and get your weekly shopping and cycle home. Next time, however, I think I'll do it on my Dutch bike and not my practical (but lovely) road bike.
Speaking of cycling infrastructure, one thing that I hear over and over again from people who wish to cycle in Glasgow is, "I would love to but I would be terrified of riding a bike on the road!" And you know what? I can understand their fear because it would seem to me, that an otherwise decent person, completely transforms into a raging abusive beast when they get behind a car wheel. Why is that? However, I refuse to be intimated off the road and you know, this is EUROPE, after all; deal with bikes, people. To a ride a bike is one of the most simple and beautiful pleasures I can think of. Also, the more people who cycle, the more motorists and the city will have to accommodate; strength in numbers!
Anyway, we never did make it to Bowling because once in Cyldebank, we were distracted by cake, coffee and gossip. After stocking up on some groceries (again, next time I'll need to take my tank of a Dutch bike), we headed back home. Seriously. What a civilised way to do your shopping - along the canal, away from cars, catching up with a friend while you experience the cool winter air. Heaven.
And again, today was crisp and cool - without a cloud in the sky - so I took the opportunity to go for a run. 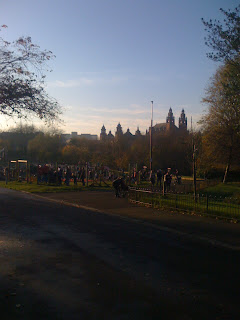 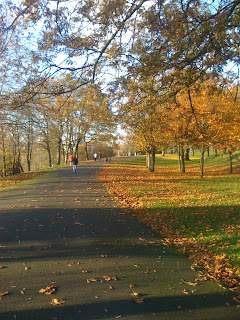 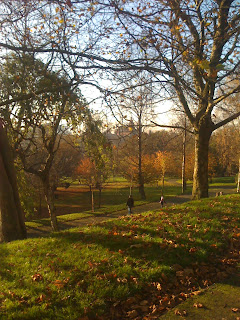 Honestly, how can you not love Glasgow when it's sunny out?! On days like today, I am reminded over and over again why I love this city and its people. 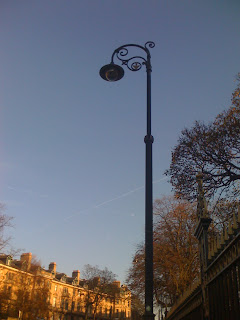 As I was out running today, I realised that I'm often running in other aspects as well - whether it be away from something (a predictable and unconvincing life in Toronto) or towards something (an attempt at happiness and control over my own life). I guess I've gotten pretty good at running. I'm not entirely sure why but I've never been one for planning ahead and indeed, I've often lived my life (especially in the last 6 years), as if each day were my last. Obviously this has its positive aspects but also a lot of detrimental effects too (I can't imagine what or where I'll be in one year; I'm totally shit at saving money and would rather blow it all travelling; I'm way too enthusiastic about mundane things and that makes me inherently unhip).
Anyway, at one point I stopped running and looked up. I saw a wee Scottish thistle engraved in the street lamp above and was totally blown away. How on earth have I lived here for 6 years and failed to notice?! See what happens when you stop running and look up? 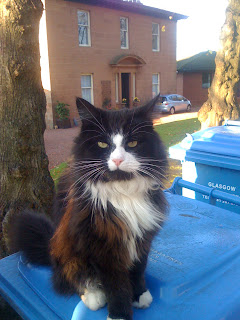 I also made a wee pal along my route. 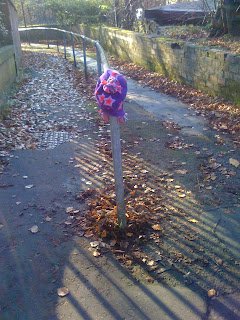 You often see this around Glasgow - tuques, hats, mittens and the odd baby sock that has been accidentally dropped/ left behind by its owner - only to be picked up by a stranger and placed on the nearest fence/ pole. I can't recall seeing this whilst I lived in Toronto, but maybe I was too busy running away to notice?
Posted by Jennifer at 10:15 PM

Cute pal :) I have decided that in two/three years from now I am going to do a week (maybe 2 if I save enough) tour of UK castles. U live in a very historical significant place, that just screams for me to explore! (not that TO doesn't have that, just like to see places that were around b4 the Americas were discovered)

start swimming then your a "triathlete" thats not unhip

JRC - to do a tour of castles in the UK could take years. Personally, I think if you've seen one, you've kinda seen them all - god, I sound like a dick. However, it's kinda true. Come to Scotland - I will show you Stirling Castle and Eeilean donan castle. The rest of the time can be spent going to pubs and (free!) museums in Scotland.

Chris - I did a triathlon once, back in Canada. I got freaked out by the masses of bodies swimming over me in the dark murky lake. *shiver*

Yeah I ment to say like a couple per country, lol. That does sound really long other than that :P Free museums??????????? Love that idea! As long as I can see some(castles) with my own eyes I'll be good to go :) I love history!

It's pretty normal to hang that stuff...I think it's more that in Toronto (and Calgary) we held onto our hats and gloves for dear life. Here? You can actually survive without them if lost...so they are lost more often :-)