WEEKEND IN PICTURES: The Sound of Settling 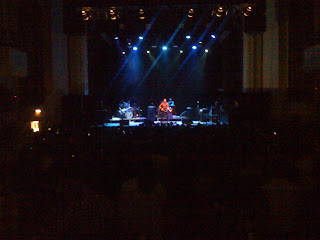 Oh, man. What a concert...I went to see Death Cab For Cutie in concert at Glasgow's O2 Academy; I have loved Death Cab For Cutie for about 10 years now but only managed to see them live for the first time ever last night. It was one of the best concerts I have been to for a long time - they are such talented musicians live! I especially loved the duelling drums on We Looked Liked Giants - both Jason, the drummer - and Ben, the lead singer - totally rocked out for a good solid 5 minutes on their own individual drum sets.
They even finished the night with Transatlanticism (one of my favourite songs and albums).
Whilst they played one of their other songs from Transatlanticism (A Lack of Colour), I heard a girl behind me say to her friend, "I LOVE THIS SONG! I first heard it when I was 14!!"
You guys? That album came out in 2003. And I was 24 at the time.
I suddenly felt so old. Yet, I don't feel it. I don't think I look it. And I certainly don't act it. Those adults that we all talk about? I'm not one of them, am I?
And then said girl screeched, "Ben is SO FUCKING HOT!!!!!!!!!!!! I LOVE HIM!!!!!!!!"
And then I thought to myself, "yeah, I guess I am an adult now 'cause that youthful enthusiasm for lusting after rock stars seems to have deflated when you get older and wiser and damn, if indie rock legends like Kim Gordon and Thurston Moore can't work it after 27 years of marriage, well then, count me out."
I'll take a decent, down-to-earth, intelligent, thoughtful, respectful and kind dude over Ben Gibbard anyway (if such a thing exists in Glasgow?!) Although, apparently poor Ben Gibbard is also divorcing Zooey Deschanel too. What is the world of indie rock coming to!?
Besides rocking out with tweenagers and their parents last night at the concert, during the day I partook in one of my new favourite weekend past times: cycling out to Clydebank with my friend, Claire. 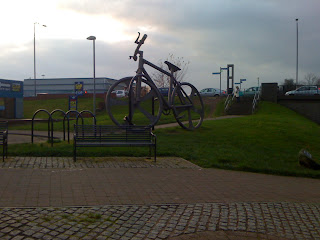 Bike parking at the canal in Clydebank 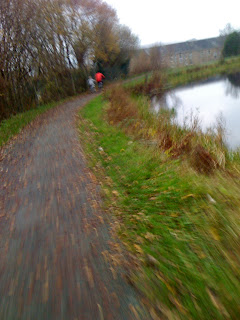 enroute with father and son ahead 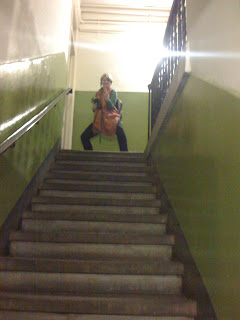 Claire - geared up and ready to go! 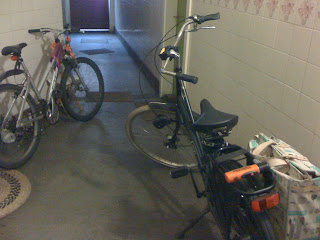 This time, however, I took my tank of a Dutch bike, as it would be able to withstand the broken glass that seems to populate the route. Besides, it was a beautiful day to leisurely pedal along the banks of the canal, gossiping with one of the most brilliant Weegies around.
Clydebank, despite what you may have heard/read, isn't that bad. In fact, it's pretty awesome. They even have a Costa Coffee - which, by Scottish standards - is pretty cosmopolitan.
Cycling out to Clydebank even makes the torturous activity, known as "shopping", more tolerable; knowing that - at the very least - you won't be stuck in traffic and afterwards, you can hop on your bike and cycle home. Seriously, I am suspicious of anyone who claims to love shopping; what's the allure!? Online shopping/ browsing, doesn't count, obviously; I love nothing more than doing my essential shopping (food, books, Nespresso coffee) and then having it delivered directly to my work. Now that is progress.
Posted by Jennifer at 7:43 PM

Hows it going jennifer. Good blog you have, I stumbled across recently. I:m from Paisley (family is from Cessnock) but work in Japan so its good to find yer blog for the pictures (first time to see the new transport museum!)and reminiscing about some of the places you mention. I see ye are a dab hand at photoshop because I cant remember so many crisp sunny winters days. Along with your blog and other bits and bobs such as the real radio football phone in (terrible banter but i love it) i have been kept royally (mis)informed of whats happening back in Scotia. I also used to live in a tenemant in Paisley and used to love that style of living in the big high ceilinged soundproof flats. Also I used to work close to the park at north clairmont street. Keep up the good work.....Ross