WEEKEND IN PICTURES
Lately I've been feeling homesick; but it's ok, it happens a couple times a year and after living in Scotland for almost six years now, I'm used to it. Actually, it might just be general malaise rather than actual longing for Canada. I mean, damn, especially after waking up this morning to find that Canada has pulled out of the Kyoto Protocol. Forget the USA and the dark days of George W. Bush - Canada might just well be on its way to becoming the shameful nation that inhabits North America. No longer is it the country that I recognise or the best part of North America. What the hell, Canada?!
So, yes, perhaps it is just a case of the Single-During-the-Holidays-Sads rather than actual homesickness itself. Although, I do love the snow and seeing as it's been raining since Friday over here, I'm probably more than a little depressed for the snow and crisp winter sunshine.
Also? My lovely friend, Lauren, performed in an orchestra (she plays violin) on Sunday night at City Halls and my motley crew of friends and I went along to support her. They even performed a beautiful rendition of The Pogues, Fairytale of New York. I'm not embarrassed to admit that I even got a little choked up at one point (I think it was during Bach...)
Now, before moving along to the photographs, I have one question for my fellow weegies. One that has alluded me for years....
1. Where is an awesome place to go dancing in Glasgow? N.B. Not skanky clubs but actual somewhat-cool joints that play wicked music so you can properly shake yo' ass.
Suggestions in the comments! 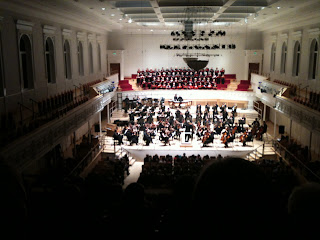 Can you spot Lauren? See the bottom of this post for additional video! 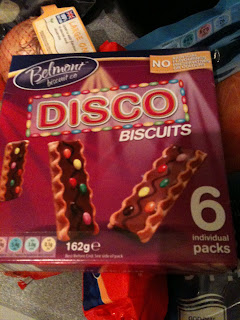 You guys? We need to talk about Aldi. Yes, you know? The German discount grocery store. I am seriously in love with it- not to mention a little addicted. Remember when I was a Fresh off the Boat Immigrant and all about Tesco? HOW COME NO ONE TOLD ME ABOUT ALDI!? It's even cheaper and better than Tesco. Sure, it doesn't have all the organic stuff that I love nor middle-class cooking ingredients like walnut oil but it does have DISCO BISCUITS! (Non-UK people: "disco biscuit" is slang for the drug of choice from the late 90s: Ecstasy). Hilarious, right?
Seriously though, Aldi is great. It's cheap but the quality of the food isn't. Besides, all my fellow immigrants seem to shop there too and we all give each other the look of approval. You know the one right? Kinda like, "yeah, we got this" one? 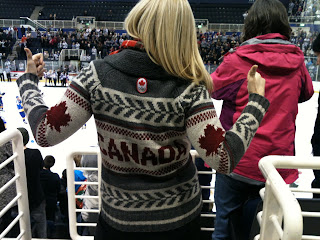 And what's a weekend without hockey? Not a very Canadian one, eh? Lauren and Erica (who are now fully-fledged puck bunnies) came along and we made a night of it. Beer, heckling, laughing and teddy-tossing (doin' it for the kids).
Later that night, Erica and I attempted to go dancing - we hit up Nice N Sleazy and Blackfriars but never ACTUALLY danced. Nice N Sleazy seemed to play "bleepy bloopy" music that tried SO hard to be obscure. I don't mind bleepy bloopy obscure music but please don't play it for the sake of being obscure; we came to dance, not to sit in the corner and nod our heads along to the beat. And I'm not going to discredit my argument by saying, "I guess I'm just old" because: (a) I'm not (fuck you. 32 is not old) and (b) I'm super immature and usually like bleepy bloopy music.
Blackfriars just seemed to play sped-up disco tunes. Again, we wanted to dance; not be in awe of a DJ speeding up vinyl. Although, to be fair, DJs using old-school vinyl is nice.
So, are we eternally damned to dance in the basement of Oran Mor? Or, if in town, The Flying Duck? Suggestions? Thoughts? A telling off? Email me! Jennifer@idreamofhaggis.com
Back to the hockey.... 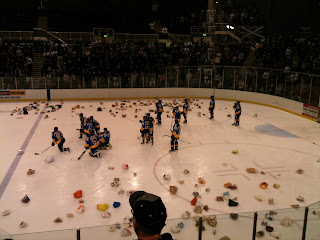 Martin in BC said...

Smart girl like you repeats a histrionic Toronto Star columnist in the Guardian. Wow.

It's been grey and rainy here, you're nor missing anything. Snow and crisp blue skies sound wonderful! Damn global warming :(

A - is it snowing there yet? It's cold and icy here. I'm hoping for a little snow at christmas!