Observations from a Canadian in The UK: Volume 2030304 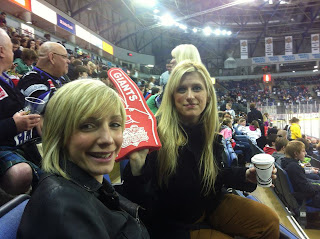 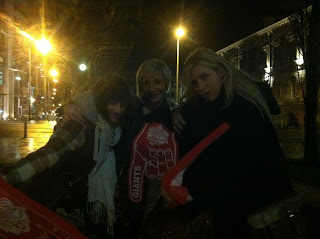 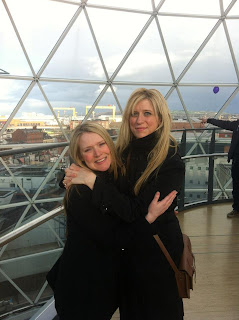 Photos courtesy of Erica
Last weekend, Erica, Lauren and I went to Belfast to follow the Braehead Clan as they played against the current Elite League hockey leaders, Belfast Giants (whose motto is, "in the land of the Giants - everyone is equal!" Cheesy, sure, but something that needs to be reiterated, I suppose, in a city once blighted by the Troubles - and still is in some ways.)
I refuse to call it a "girls weekend away" even though - technically - it was three girlfriends away from home and their partners/ husbands/ boyfriends. The notion of a Girls! Weekend! Away!, just cultivates images of pink boas, tiaras, cheap Merlot wine, staggering about on 6 inch heels, avoiding pools of vomit, and limp fake eyelashes slightly askew at 3.00am.
In other words, my idea of hell.
Sure, we probably had too much beer *and* wine (we mix our drinks, ok?) and yes, we might have shrieked at some points over the weekend and OF COURSE we ate cake and murmured "ohmygod ohmygod ohmygod" as we shovelled it into our faces BUT I banned anything pink from our weekend away: no matching pink boas. No matching pink cowboy hats (something Scottish girls seem to wear when prowling in packs).
So, with that in mind, we (or rather, Erica) organised a weekend in Belfast to support the Braehead Clan whilst they played an away game against the Belfast Giants. Unsurprisingly, the Clan lost. Indeed, the final score was 6-1. Ouch.
A couple things: I really like the Odyssey Arena (where the Giants play); it's like a proper hockey arena and everything! It reminds me of arenas at home in Canada - very corporate. You can tell that a lot of businesses have sunk money into the place in an effort to bring the divided communities together in their shared love of violent spectator sports and processed foods and beer. In fact, in between periods, they fire SUBWAY sandwiches into the audience with a "Subway cannon". It doesn't get anymore American than that. Video evidence below.
Secondly, I really like the Belfast Giant fans/ supporters; most likely because they remind me of Canadian hockey fans. You see, Braehead Clan fans often sing "supporter songs" (something which is more common at soccer games then hockey matches and to any Canadian hockey fan, is quite foreign). So, not only do Clan fans sing but LOUDLY. Which is cool - it's what I love about Scottish people: if they do something, they're going to do it with great enthusiasm. Or as I like to say, they fucking give'r (e.g. balls to the wall).
Belfast Giant fans, however, quietly sit watching the game, and really only make any noise if there is a goal or fight. Much like Canadian hockey fans. I don't know; I suppose it reminded me of being at home and I liked that. What can I say? I'm a sucker for quiet stoic types.
Another thing which may come as a surprise to my fellow Canadians - at hockey games over here, they have "Away" sections of the arena specifically dedicated to the OTHER team's supporters. Any hockey game I have been to in Canada, fans from both sides are mixed amongst the crowd. I guess because British people are fucking crazy, they have to separated like in soccer matches?! YOU TELL ME.
So, being with the "Clan Fans" we sat in the supporter section and drew stares from all the Belfast Giant fans who were alarmed by our loud and lively section. And random outbursts of songs. At one point a fellow Canadian we met (that's another story) - whose brother was playing for the Belfast Giants - brought us over some foam fingers (adorned with Belfast Giants logos) because we had casually mentioned that we wanted the WHOLE North American experience and thus, needed foam fingers to go along with our beers. Needless to say, I don't think it went down too well with some of our fellow Clan fans (guys, it's just a game. Relax).
Which isn't to suggest that Clan Fans don't have a wicked sense of humour. You see, the quiet Canadian-like audience in Belfast only really came alive when the Subway Cannon was brought out in between periods. To which our fellow Clan fans sang, "You only sing for Subwaaaaaaaaaaaaaaaaaaay!"
Redeemed by that sharp Scottish humour.
Posted by Jennifer at 9:14 PM

Wouldn't that hurt getting a sandwich thrown at you by a air cannon LOL Sounds like a good "girls weekend" so need to do one here :)